The Case for Seasonal Switching

In this May-2013 article, What To Sell, If Selling In May, it was shown that since 1926 most of the excess return of Small Caps was earned during the seasonally strong months of November through April, and that one could have sat in cash each May through October and beaten “Small Cap Buy and Hold” on a total return basis.

The article also demonstrates that since the inception of the S&P 500 sector data in late 1989 it would have been beneficial to own cyclicals (Discretionary, Industrials and Materials) during the seasonally strong market months of November through April, and then swap into defensives (Staples, Health Care and Utilities) for the May to October period. This anomaly is exploited in this Seasonal ETF Switching Strategy which holds a position for 6 months, which is not tax efficient as this would require a holding period longer than one year.

The Cyclical and Defensive ETFs

For the tax efficient model the cyclical ETF group used is:

The defensive ETF group used is:

In order to provide tax efficiency an investment position has to be held for over one year. Here, a combination of three identical models is used with starting dates 6 months apart and fixed 18 months position holding periods. This results in a combination model which always has two thirds of the portfolio allocation in the “correct” direction, defensive or cyclical, and one third in the “wrong” direction, as shown in Figure-1.

The model was back-tested on the on-line simulation platform Portfolio123, which provides historical economic and financial data as well as extended price data for ETFs before their start dates. Only one ETF is periodically selected for each component model from the ETF groups by a simple ranking system and held for 18 months. There are no market timing- or stop-loss rules in the models.

The combination model only trades at the end of April and end of October each year. In the Appendix is a listing of all the 38 completed transactions since 1999. There were 5 losers, of which the highest was -43% for Model-3 over the 18-month investment period 10/22/2007 to 4/27/2009 which included the Great Recession, officially lasting from December 2007 to June 2009. 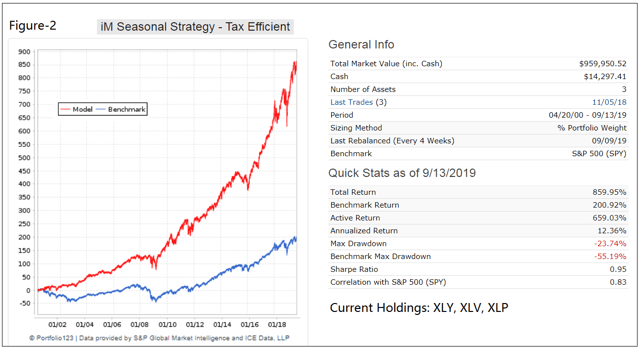 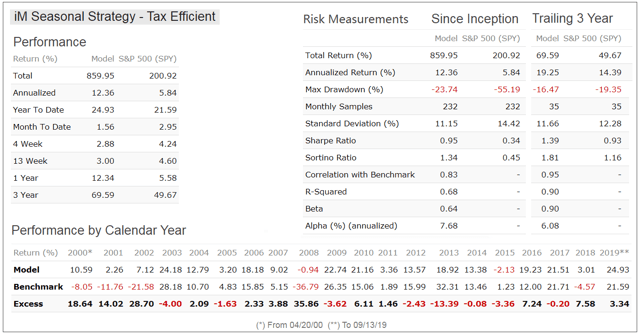 Performance of the tax-efficient seasonal switching strategy with 4 positions

This strategy combines three models each holding 4 positions for 18 month. Since all the ETFs of each group are used the effect of the ranking system is eliminated. The model shows an annualized return of 9.5% with a maximum Drawdown of -41%, still out-performing with less risk the benchmark SPY and confirming the seasonality of the stock market. 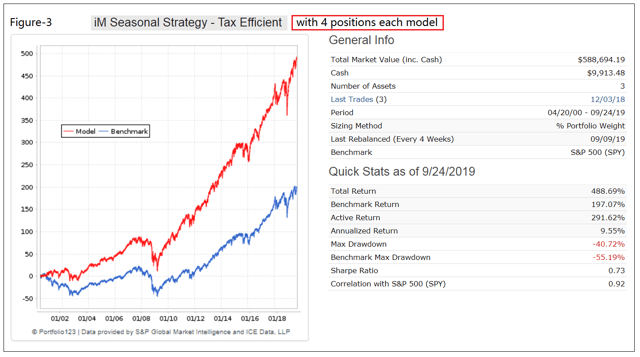 Backtesting with historic data shows that investment returns can be greatly improved over buy-and-hold by employing a seasonal tax efficient ETF switching strategy. Minimum trading effort is required as one would only switch between ETFs every six months after holding a position for 18 months, trading on the first trading day of the last week in April and October of each year.

The performance of this model and ETF selection is reported at iMarketSignals.

We thank Ian Fellows who provided the idea of using 3 models in parallel.

Disclosure: I/we have no positions in any stocks mentioned, and no plans to initiate any positions within the next 72 hours. I wrote this article myself, and it expresses my own opinions. I am not receiving compensation for it. I have no business relationship with any company whose stock is mentioned in this article.