Find out what retail foreign exchange traders make of the Australian Dollar’s prospects right now, in real time, at the DailyFX Sentiment Page

The Australian Dollar market will look to October’s monetary policy decision from the Reserve Bank of Australia this week, with the chances of an interest rate cut on Tuesday judged to have risen considerably in the past few days.

According to index provider ASX, the probability of a quarter-percentage-point cut to the record low, 1% Official Cash Rate in place since July is now nearly 80%, having risen from 25% back on September 16.

Furthermore, the key 30-day interbank implied cash futures yield curve (an interest-rate predictor) has returned to unambiguously pricing in two cuts, in total, by June 2020. The first is indeed priced in by November. However, a second cut had been in some doubt over the past two weeks by to this measure. Now it seems to be firmly back on the table.

Why So Very Dovish?

It’s difficult to tell precisely what has engendered this new burst of dovishness among Aussie watchers. For sure it seems to go further than RBA Governor Lowe’s assessment that the economy may be at a ‘gentle turning point’ and suggest that something more worrying could be afoot.

The central bank did keep the prospect of lower rates very much alive in its last set of monetary policy meeting minutes, but probably not to any greater extent than it has for months. The market has also seen the dimming of one formerly unarguable bright spot- the Australian labor market. Full-time job creation unexpectedly sank in August, but the data overall were by no means awful and it is far from certain that the formidable Australian job-creation machine has stalled meaningfully.

AUD/USD heads into this interesting week under unsurprising pressure, closing back in on the eleven-year lows of August. It’s obviously hard to see it rising very far considering the interest rate prognosis but there is an interesting possible wrinkle here. It may just be that the market is a little more sure of itself than the central bank.

We saw this with the Reserve Bank of New Zealand last week. It held its own interest rates, as had been expected, but the New Zealand Dollar made gains. These didn’t come about because the central bank was not dovish. It was. It just wasn’t as dovish as the market had expected.

On the basis that this might just happen in the Aussie’s case, and that a rate cut on Tuesday must by now be pretty well priced in, it’s an admittedly cautious neutral call this week. 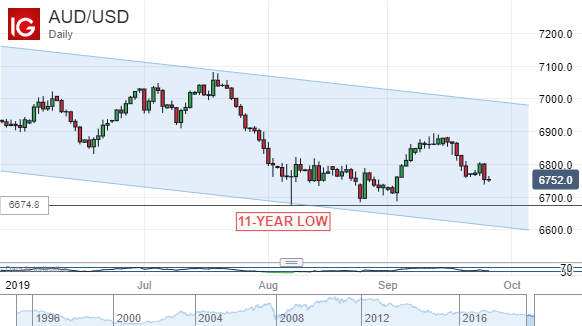