Join our analysts for live, interactive coverage of all major economic data at the DailyFX Webinars. We’d love to have you along.

The Australian Dollar slipped a little Monday on news that China’s manufacturing sector contracted once again in September, although this market remains primarily focused on domestic matters and, more specifically, Tuesday’s interest rate decision from the Reserve Bank of Australia.

China’s September manufacturing Purchasing Managers Index came in at 49.8, better than both the expected 49.6 reading and August’s 49.5 but still below the important 50 line which separates expansion from contraction. But for two months the reading has been below that point since November 2018.

These data cover China’s larger companies which often have very strong state links. They strongly suggest that trade tensions with the US continue to mire China’s economic progress and may in investors’ minds underline the increasing urgency of striking at least a trade settlement if not an outright deal.

The Australian Dollar can act as the market’s favorite China proxy but may have only done so to a limited extent on Monday after the numbers.

AUD/USD weakened a little but the market is probably looking inward to that RBA decision. The Official Cash Rate is expected to be cut this week to a new record low of 0.75%. This expectation is probably pretty well baked-in to pricing now, with the Aussie still close to eleven-year lows against its US cousin. 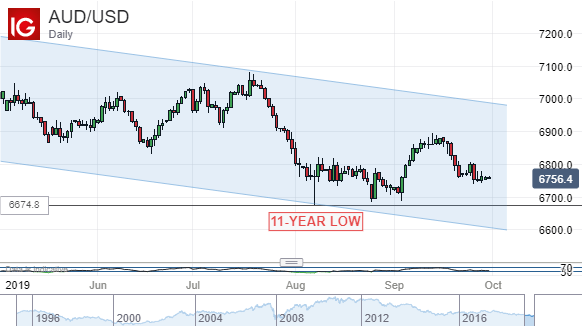 Assuming the RBA delivers, markets will want to know how likely it is that more stimulus is coming. At present the futures market is tipping another reduction next year, but the RBA may well be very leery of stoking further borrowing, keeping in mind Australian consumers’ already vast debts.

While the RBA is unlikely to take any option of the table, there is some chance that it may be less dovish in tone than markets expect. This could in turn see AUD/USD make gains, even if they are unlikely to be large or long-lived.