Bitcoin prices cratered over 10% on Tuesday as an area of longstanding support around $9,545 was breached. The initial break was gradual but bears quickly took control and pressured prices comfortably beneath the area of technical support – resulting in the subsequent bloodbath. Falling from $9,300 to $8,600 in just 15 minutes, the afternoon price action was enough to put BTCUSD on pace for its worst daily performance since July 16 when the coin dropped more than 13%.

Suffering a bearish break, the coin will now look for subsequent support in an attempt to stem further losses. An immediate level of note is the 200-day moving average which currently resides around $8,300. A break below this level could see losses accelerate as bearish momentum builds. If pierced, Fibonacci support around $7,100 may look to provide secondary support. BTC still enjoys a year-to-date return of 126% but Tuesday’s breakdown is a worrisome development for cryptocurrency believers. 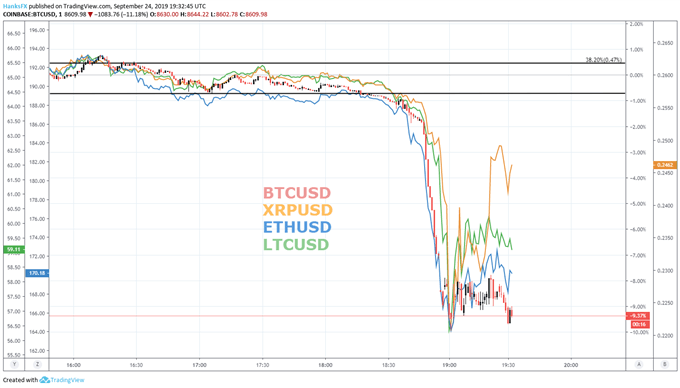 To that end, Ethereum, XRP and Litecoin suffered similar losses as the cryptocurrency market endures another rout – akin to the crypto selloff in late August.While Bitcoin and the various altcoins – apart from XRPUSD – have enjoyed positive returns in the year-to-date, the recent string of losses will likely work to further undermine market sentiment and could bring about a continuation lower barring a fundamentally bullish development to shift the tide.

While the abrupt declines are undoubtedly concerning, the quick recovery effort from XRPUSD could suggest some factions of the crypto market believe the selloff is overdone – creating potential for a period of consolidation before continuing lower. As Bitcoin looks to regain its footing, follow @PeterHanksFX on Twitter for further updates and analysis.