The US Dollar is headed into Friday’s trading session on its front foot. The DXY Index – a commonly referenced benchmark for tracking the greenback’s performance – recorded its highest close since May 11, 2017 in an extension of healthy gains recorded Wednesday. We noted in yesterday’s US Dollar price volatility report that there was potential for trend continuation higher, which indeed materialized. Aside from an upbeat technical backdrop, the latest Fed official commentary hinted at possible apprehensiveness to providing further monetary policy accommodation at upcoming Fed meetings.

USD price action is a little more ambiguous over the short-term, however, with high-impact event risk noted on the Economic Calendar that has potential to strongarm the greenback’s next direction. Although, the overarching technical framework the US Dollar has been operating within remains unchanged – the 23.6% Fibonacci retracement level and 20-day simple moving average will likely serve as an area of confluent support while the September 3 intraday swing high could keep a lid on sustained upside progression.

US Dollar implied volatility is back on the rise as the world reserve currency rips higher while uncertainty surrounding Friday’s data dump – specifically how it might impact future FOMC rate decisions – looms. Relatively speaking, USDCHF and USDCNH are expected to be two of the most volatile USD currency pairs during Friday trade judging by the 12-month percentile rank column, which makes sense seeing that USDCHF is particularly interest rate sensitive currency pair and USDCNH remains in traders’ purview with ongoing US-China trade war uncertainty. 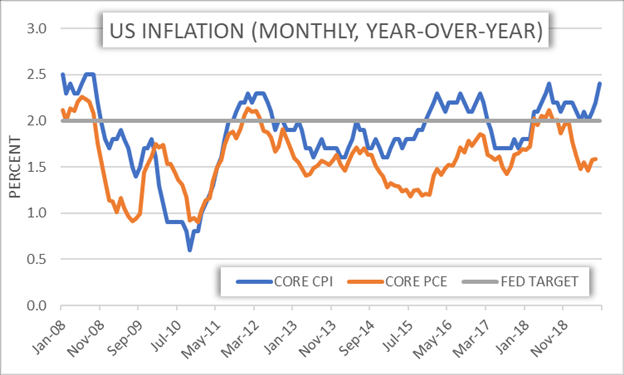 US inflation figures will likely take the spotlight Friday with the release of August Core PCE data seeing that it is the Fed’s preferred inflation measure and price stability close to the central bank’s symmetric 2% target covers one of its two governing mandates. I previously highlighted how US inflation is inching closer to the Federal Reserve’s target with core PCE likely to be dragged higher by core CPI, which just touched an expansion high reading of 2.4%. Also, there is still a material possibility that the lagged effect from US-China tariffs, in addition to recent FOMC rate cuts, have yet to fully trickle their way into headline inflation indicators.

That said, if August US Core PCE comes in hotter than 1.8% year-over-year reading expected, the US Dollar rally could push toward fresh 2019 highs as markets react to the reduced likelihood of further FOMC rate cuts. Conversely, another muted US inflation report could weigh on the greenback if it drives traders to bid up the probability that the Fed will provide more monetary stimulus. 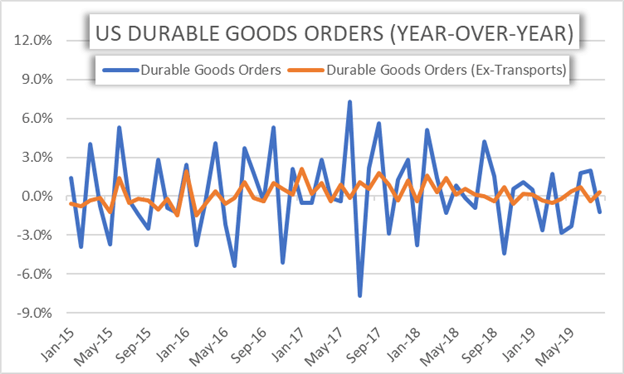 Also slated for release Friday at 12:30 GMT is US Durable Goods Orders data – a major contributor to US GDP growth. The headline August durable goods orders figure is expected to drop to 1.2% from 2.0% the month prior, but excluding transports, is expected to rebound to 0.3% from -0.4% in July. Another sluggish reading on US Durable Goods Orders could provide markets with additional evidence that economic activity continues to slump, which could reignite recession fears and send the 2s10s Treasury yield curve plunging back into inversion territory. Though the initial reaction to weak data could be bearish for the US Dollar, it may end up reversing back higher if safe-haven demand keeps the greenback afloat. 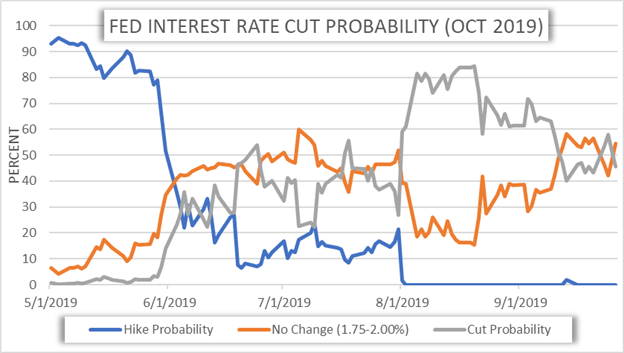 According to the latest overnight swaps data pulled from Bloomberg, traders are pricing an October rate cut as a coin toss in a close 50-50 split with the probability that the Fed opts in favor of staying sidelined at its next FOMC meeting.