Revisions within updated second-quarter US GDP data appeared to spook markets initially. While the headline annualized growth rate was confirmed at 2 percent, the pace of private consumption growth was downgraded while the core PCE gauge printed at a higher-than-expected 1.9 percent on-year.

Taken together, this warns the pillar of US economic resilience – the consumer – may be on shakier ground than markets appreciate, even as the Fed is led away from further rate cuts by nearly on-target price growth. Nevertheless, traders were unwilling to commit with gusto to a risk-off push.

From here, a timelier version of the Fed’s favored PCE inflation measure covering August is in focus. It is expected at 1.8 percent on-year, marking the third consecutive month of gains. If it tops forecasts like the quarterly reading published yesterday, investors’ mood might sour as rate cut hopes dwindle.

Crude oil prices seem likely to face selling pressure alongside other cycle-sensitive assets in this scenario. Gold might have been expected to capitalize on de-risking but scope for that seems limited when worries about higher-than-desired interest rates are the inspiration for divestment.

Get our free guide to help build confidence in your gold and crude oil trading strategy!

Crude oil prices are marking time atop support defining the rise since early August. A daily close below this barrier opens the door for a test of support clustered around the $50/bbl figure. Alternatively, a rebound above resistance levels at 58.76 and 60.84 exposes September’s swing high at 63.38. 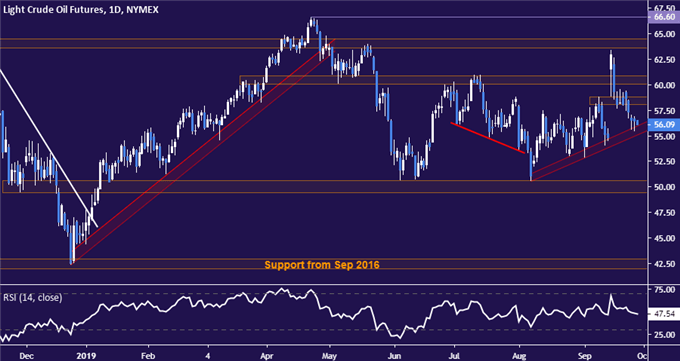