EURUSD is trading back below 1.1000 and at its weakest reading since the September ECB meeting after the latest Eurozone PMI report reignited Euro selling pressure. The flash Eurozone PMI composite output index plunged to a 75-month low in September according to IHS Markit driven by a deepening contraction in the manufacturing industry and is showing signs of spreading to the services sector. The DailyFX Economic Calendar summarizes the data readings and consensus estimates. 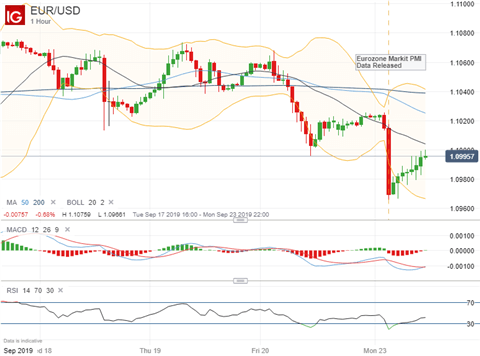 EURUSD took a nosedive below the 1.1000 handle immediately after the Eurozone PMI data figures crossed the wire, which followed Germany’s “simply awful” manufacturing PMI prints. EUR weakness owing to the disappointing datapoints was broad as EURGBP, EURJPY, EURAUD and EURCAD sank similarly, but the Euro has since attempted to rebound from intraday lows while ECB President Mario Draghi’s testimony to the European Parliament’s Committee on Economic and Monetary Affairs unfolds.

ECB’s Draghi is under fire at the European Parliament in Brussels today as the Eurozone’s head central banker discusses its recent monetary policy decisions and outlook on the economy. Here are some highlights from his key comments:

Mario Draghi is not the only central banker in the spotlight Monday as the US comes online. Outgoing Chief of the IMF Christine Lagarde, who will replace Draghi at the ECB’s helm on November 1, just stated in an interview on CNBC that tariffs stemming from the ongoing US-China trade war stand to shave a near full percentage point off global GDP growth next year. Lagarde’s comments follow the recent slash to the OECD’s global GDP growth forecast from 3.2% to 2.9% for 2019 and from 3.4% to 3.0% for 2020 respectively, with the organization’s chief economist underscoring how “growth is taking a dangerous downward turn.”

While EURUSD whipsawed back higher after details out of the September ECB meeting revealed that French, German and Dutch ECB Governors opposed the resumption of quantitative easing, a looming economic recession hinted at by today’s PMI data – coupled with pessimistic comments from Lagarde – may warrant further dovish action from the ECB down the road, which may serve as a daunting headwind for the Euro over the near term.