EUR: The Euro has gotten off to a soft start to begin the week following a raft of weak PMI figures. Germany’s manufacturing recession has continued to worsen with concerns mounting that the slowdown could become more broadbased as the services sector had also slowed to a 9-month low. As such, it is likely that the German economy slipped into a technical recession in Q3, which in turn is likely to see the calls for Germany to release the fiscal taps grow louder. While the Euro tripped through 1.1000 on the release, hitting a low 1.0967, the currency has grinded back towards 1.1000. As a reminder, there is a sizeable $5.3bln vanilla option expiring at 1.1000 on Thursday, particularly acting as a magnetic draw in the meantime. Elsewhere, support is seen at 1.0927 (post ECB low).

CAD: With little on the domestic agenda, the Canadian Dollar is taking its cue from oil prices. Initial weakness in the Loonie as crude oil edged to session lows on the back of source reports highlighting that Saudi Arabia’s oil facilities would fully restore oil production by the beginning of next week. However, yet again bids in USD/CAD had been capped at the 1.3300-10 area, which coincides with the 200DMA (1.3305). 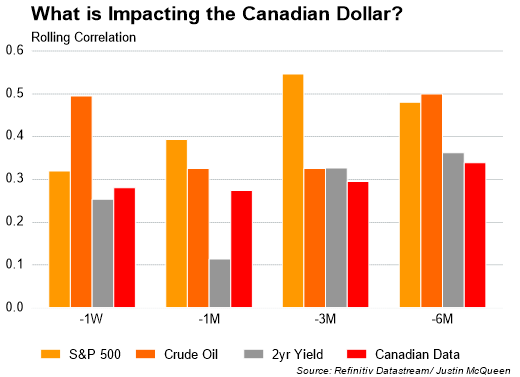 GBP: The Pound trades at session lows of 1.2415 at the time of writing as EU’s Barnier dampens expectations of a Brexit referendum. The EU’s Chief Negotiator highlighted that there is currently no basis for reaching a deal, given that the UK’s proposals on alternative arrangements to the backstop are insufficient in fulfilling its objectives.