Through most of this year, General Motors (GM) shares have been trading neutral. Over the past 3 years, the stock has meandered up and down, though it’s managed an 18% gain through the period. YTD 2019, GM shares are up ~10%.

Meanwhile, the current dividend yield is over 4%. The payout appears safe.

While I’m not advocating investors load up on shares today, I remain constructive on the company and the stock. I plan to hold my position through the cycle on the expectation that this automaker will do well during the next early-phase economic expansion. 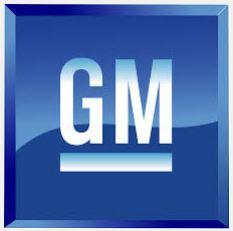 General Motors is a best-of-breed, global automobile company. Currently, I premise we are in a late-cycle economic expansion. Therefore, now isn’t the time for automobile stocks to shine. The business is cyclical, riding the waves of economic expansion and contraction. However, trying to time the end of the expansion cycle can be very difficult.

Given the financial strength of the GM enterprise, its good management, strong franchise, and generous dividend, I am content to hold my shares through the entire cycle.

If the price falls below $30, I am likely to accumulate more, in addition to ongoing dividend reinvestment. I plan to begin to distribute part of my position if the price increases above $43.

Is The Company Well-Managed?

I contend CEO Mary Barra and her staff are doing a very good job. Dan Ammann, who served previously as the President of General Motors, recently moved into the Cruise CEO role. He is widely considered one of the best in the business. More on that later.

Management performance may be evaluated via several metrics and observations.

General Motors emphasizes shareholder returns. RoIC figures are presented quarterly. The stated target is 20% or greater. Below is a graph of General Motors’ return on invested capital from FY 2014 to date – 2014 marking the beginning of Mary Barra’s term as CEO.

Note to readers: Data for the following charts was taken from company reports and accepting company calculation methodology, unless otherwise noted; data points are for the full year, except for 2019, whereby half-year information is presented. 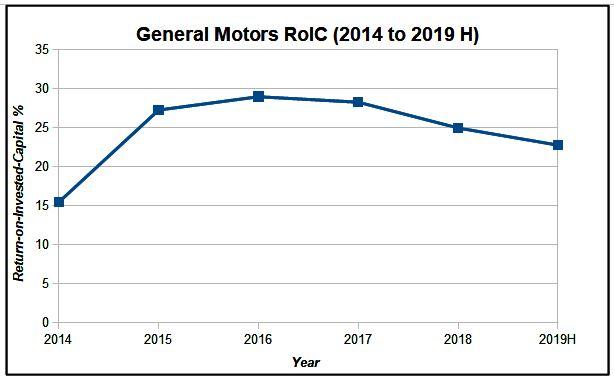 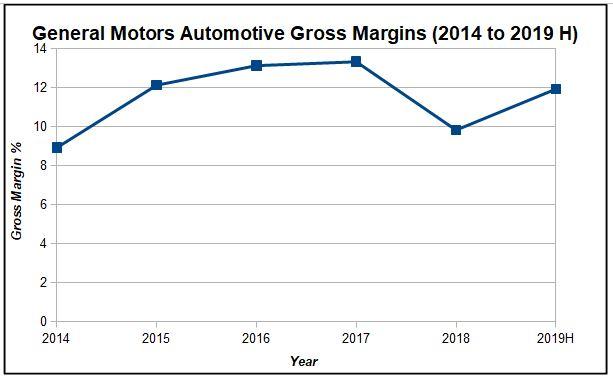 Gross margins have remained solid throughout her tenure, generally trending above 11 percent. For comparison, GM recorded 9.8% gross margin in FY 2018, while Ford Motor Company recorded a 9.3% margin. Through the first half of this year, automotive margins bumped up to 11.9%.

Prior to Mary Barra’s tenure, General Motors’ reputation included top heavy management and an inefficient steward of SG&A expenses. In conjunction with 2014 change management, this became a focus. The results are found below. 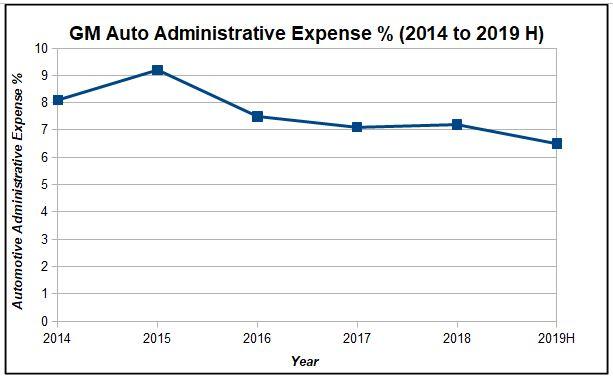 The company’s automobile administrative expense as a function of automotive revenue has been trending down. Through the first half of 2019, General Motors’ administrative costs were 6.5% of revenue; Ford recorded a 10.2% marker.

Primarily, General Motors measures profitability by focusing upon EBIT (Earnings Before Interest and Taxes) and EBIT margins. EBIT (also known as operating income) is a good measure to evaluate how the underlying core business is functioning. 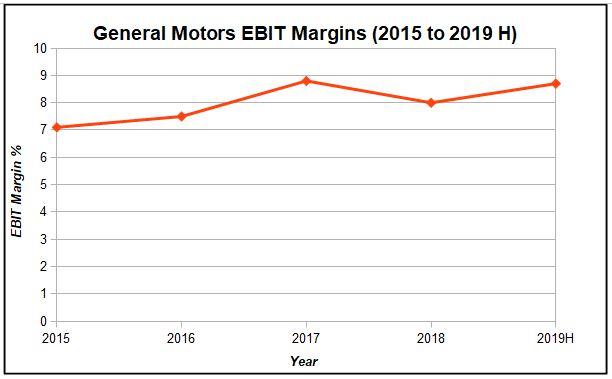 An attribute of a good management team is the ability to manage earnings expectations, and then meet or beat the Street. Indeed, GM is quite good at this.

Since 2016, General Motors management registered positive earnings surprises nearly every quarter. The ability to “beat-and-raise” earnings expectations is a signal that the senior leadership team understands and can forecast near-term results accurately.

In order to handicap GM’s financial strength, I highlighted several measures; some include balance sheet data, and others do not. 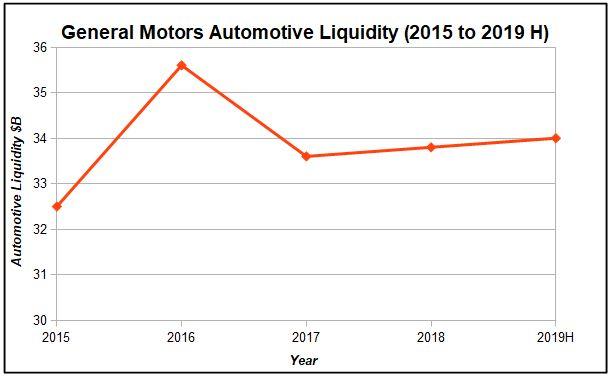 Mary Barra instituted this goal early in her tenure. The target has been met throughout the period.

The Interest Coverage Ratio is calculated by dividing EBIT by interest expense. The metric offers a view towards how well a business can service its debt. For industrial concerns, an ICR above 3x is reasonable.

By contrast, Ford Motor Company did not produce positive free cash flow in 2018, nor through the first 6 months of 2019.

The F.A.S.T. Graph below highlights General Motors’ book value per share for the period 2014 through 2018.

General Motors’ total shareholder equity rose 10% since the beginning of this year.

Is There A Compelling Corporate Narrative?

As the old saying goes, “The numbers tell a story, but the number aren’t THE story.”

Given that backdrop, what’s the overarching GM corporate narrative? What major management decisions and developments are affecting the business?

It’s said Waymo is outstanding at developing an autonomous vehicle. However, General Motors has the inside track when it comes to the competencies required to manufacture, market, distribute, and sell such vehicles.

If you care to read more about Cruise, its investors, and its associated value, please see the links here and here and here.

In addition, under CEO Barra and the board of directors, General Motors has repurchased common and preferred shares consistently. The following F.A.S.T. Graph illustrates common shares outstanding from 2014 through 2018. The repurchase programs have reduced total shares materially.

I expect 2019 will continue to show another net decline in total common shares outstanding.

General Motors exhibits the attributes I seek in a long-term investment:

However, as we are most likely into a late-cycle phase economic expansion, I cannot recommend wholesale share accumulation. Indeed, in the event of a recession, automakers are some of the earliest casualties.

Nonetheless, trying to time cyclical stocks is dicey. A late-cycle phase can last a long time. Recessions can be short and shallow. Therefore, I have decided to retain my GM shares (largely accumulated in 2013 and 2014 at materially lower prices than today) and ride the cycle. The generous dividend yield helps the wait. I believe management’s strategies will insulate the payout during recessionary times.

Meanwhile, I contend GM stock valuation is relatively inexpensive. New investors might decide to pick at a few shares to “get in the game.” However, such investors may need to hold through the cycle, perhaps building a position upon weakness. 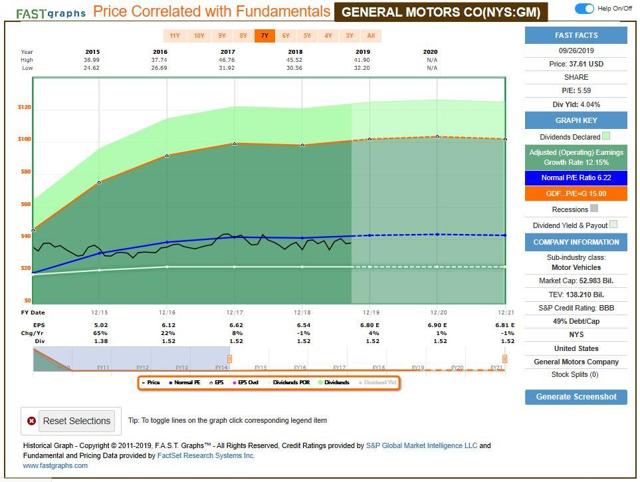 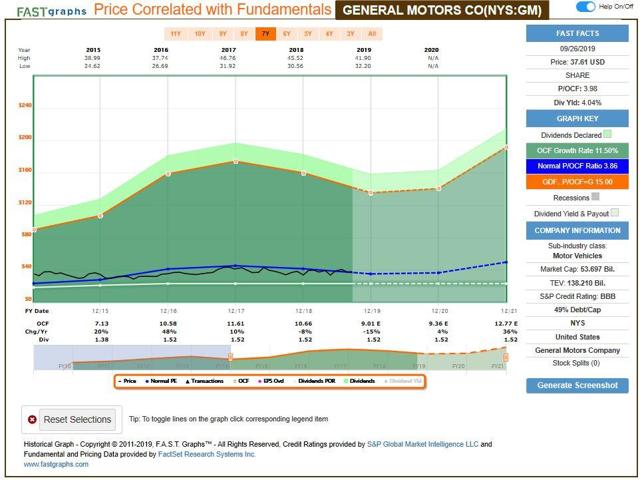 Taken together, I suggest GM stock may be currently valued in the mid-$40s range. Of course, a full-on economic contraction is likely to further compress valuation multiples, while continued late-phase economic expansion could see multiples improve a turn or so. GM now has an operating P/E below 6x.

For my personal account, I plan to accumulate additional shares if the stock falls below $30. That defends my current basis. On the other hand, I am likely to distribute some (but not all) of my stock if prices reach $43.

Please do your own careful due diligence before making any investment decision. This article is not a recommendation to buy or sell any stock. Good luck with all your 2019 investments.

Disclosure: I am/we are long GM. I wrote this article myself, and it expresses my own opinions. I am not receiving compensation for it (other than from Seeking Alpha). I have no business relationship with any company whose stock is mentioned in this article.