The New Zealand Dollar made sharp gains Wednesday after the Reserve Bank of New Zealand left interest rates on hold, as had been widely expected.

The central bank shocked markets in August with a surprise, half-percentage-point hack at the Official Cash Rate which took it down to a new record low of 1%. Although the markets have always doubted that this would mark the end of the rate cutting cycle, they did suspect that the central bank would wait a while to assess its effects on economic activity and pricing power before considering another move.

This proved to be broadly the case. The Monetary Policy Committee agreed that new information since August didn’t warrant any change to the outlook. However, it did note that global trade and other political tensions remained elevated and said that there remains scope for more fiscal and monetary stimulus if necessary. Rates can be expected to remain lower for longer, the Committee said.

It also noted the easing of the New Zealand Dollar exchange rate, with implicit approval.

All up, this statement was not obviously more dovish than those of the recent past, which probably accounts for NZD/USD’s gains in the aftermath.

The New Zealand Dollar has fallen this month to lows not seen since September 2015 and, for as long as it clearly lacks any prospect of interest rate support, it seems unlikely to stage a meaningful recovery. 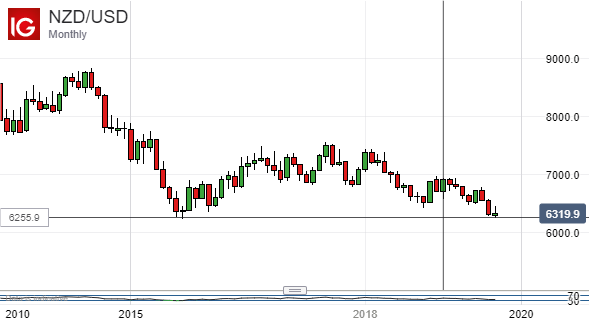 Like its Australian cousin the New Zealand Dollar still offers interest rates below those of the US Dollar, a fact which is likely to keep both under pressure for as long as it lasts.