Welcome to Orchid’s Platinum Weekly report, in which we discuss platinum prices through the lenses of the GraniteShares Platinum Trust (NYSEARCA:PLTM).

PLTM has rebounded well since we published our previous weekly update, reflecting positive tailwinds from broad-based upward pressure across the precious metals complex and supply tightness fears in South Africa.

We see further upward pressure in PLTM for the rest of the month because the macro backdrop favours the precious metals space, thereby resulting in strong investment demand for platinum, while the micro backdrop is conducive to a firmer platinum price due to a rising probability of supply disruptions in the world’s largest platinum-producing country.

Our September high forecast is at $10.00 per share, representing roughly a 6% upside from its current level.

PLTM, which was created in January 2018, is directly impacted by the fluctuations of platinum spot prices because the fund physically holds platinum bars in a London vault and custodied by ICBC Standard Bank.

The investment objective of the GraniteShares Platinum Trust is to replicate the performance of the price of platinum, less trust expenses (0.50%), according to the official Graniteshares’ website.

The physically-backed methodology prevents investors from getting hurt by the contango structure of the platinum market, contrary to ETFs using futures contracts.

Also, the structure of a grantor trust protects investors since trustees cannot lend the platinum bars.

PPLT is the lowest-cost ETF on the market, with an expense ratio of 0.50%. PPLT competes with the Aberdeen Standard Physical Platinum Shares ETF (PPLT), which was created in October 2010, which is however more expensive considering that its expense ratio is at 0.60%.

Taking into account the total cost, however, PLTM is more costly than PLTM due to the higher spread (0.10% for PPLT vs. 1.08% for PLTM over the past 60 days.

That said, we expect the total cost for PLTM to eventually move below than for PPLT as more liquidity flows into PLTM. 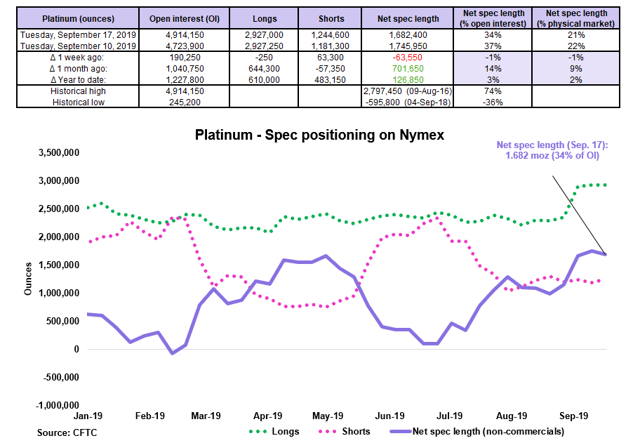 Speculators cut slightly their net long exposure to Nymex platinum in the week to September 17, for the first time in four weeks.

Still, the net spec length has increased markedly by 701,650 tonnes over the past month, representing around 14% of open interest.

At 34% of OI, however, the net spec length is far below its historical high of 74% of OI, suggesting that there remains plenty of dry powder among speculative funds to deploy on the long side.

Implications for PLTM: Given the large room for further speculative buying in Nymex platinum in the months ahead, platinum prices could appreciate strongly from current levels, which in turn would lift the performance of PLTM. 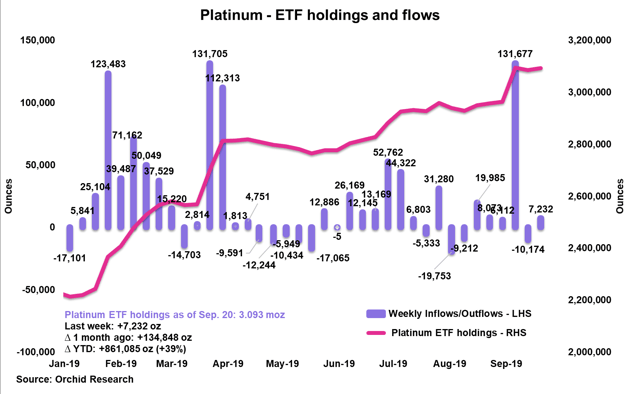 ETF investors resumed their buying for platinum in the week to September 20 (+7koz), after liquidating roughly 10koz in the prior week.

The bullish bias adopted by the ETF community prevails. The ETF buying is driven by both momentum-driven strategies (most technical indicators are positive, stimulating ETF buying) and discretionary strategies (supply uncertainty continues to grow in South Africa, eliciting ETF purchases on expectations for a tighter market in case of supply disruptions).

ETF investors have bought nearly 900koz since the start of the year, representing an increase of 39% in total platinum holdings and 11% of global consumption.

Implications for PLTM: The significant increase in investment demand for platinum so far this year has more than offset the weakness in demand from the auto sector, resulting on net in tighter market conditions. This should continue to push platinum spot prices higher, benefiting PLTM.

Platinum investors are closely monitoring the supply developments in South Africa (73% of global platinum output) due to heightened uncertainty surrounding the supply outlook caused by the dispute between the talks between the Association of Mineworkers and Construction Union (Amcu) and Anglo American Platinum (OTCPK:AGPPF) and Sibanye (NYSE:SBGL).

The leader of the Association of Mineworkers and Construction Union (Amcu), which is more militant than the National Union of Mineworkers (NUM) has been re-elected, suggesting that the tough stance adopted against Anglo Platinum and Sibanye will remain in place.

While the Amcu declared a dispute earlier this month, it has also accused Sibanye to encourage workers to join other unions to weaken Amcu’s negotiating position.

Although the process will take time before an actual strike occurs, the risk of supply disruption is elevated in our view.

As a reminder, the union led the longest-ever platinum strike in the country in 2014 (~five months), resulting in a drop of 16% in domestic platinum production.

Implications for PLTM: This uncertain situation should continue to stimulate monetary demand for platinum on anticipation of possible meaningful supply disruptions in South Africa. This is therefore bullish for platinum spot prices and thus PLTM.

We expect PLTM to move further higher into the end of the month, mainly because the macro backdrop is overall friendly for the precious metals space and supply uncertainty in South Africa is likely to stimulate monetary demand for platinum. The light spec positioning in Nymex platinum suggests plenty of dry powder to deploy on the long side of the market, which is bullish for platinum spot prices and thus PLTM.

Our September high forecast is at $10.00 per share for PLTM, representing a nearly 6% upside from its current level.