This article was selected to be shared with PRO+ Income subscribers – find out more here.

I like Singapore-listed industrial REIT Sabana Shari’ah Compliant Industrial Real Estate Investment Trust (OTCPK:SBBSF) [SSREIT:SP], or Sabana REIT, for its upside potential as both a turnaround and event-driven play. Sabana’s valuation is undemanding at 0.79 times P/B and a forward FY2019 5.9% distribution yield.

But Sabana REIT’s turnaround plans will take time, with a major asset enhancement initiative for its New Tech Park property to be only fully completed by 4Q2020. In the interim, the REIT’s portfolio occupancy and rental rates could face downward pressure from weak economic conditions in Singapore. Acquisitions of other properties will only take place in 2020 at the earliest; while there is no certainty that Sabana REIT will be a takeover target anytime soon.

Taking the above into consideration, I suggest investors capitalize on any share price weakness associated with poorer-than-expected results for the REIT to enter at a lower price of S$0.405 pegged to a 6.5% forward FY2019 distribution yield.

Listed on the Singapore Stock Exchange in November 2010, Sabana REIT was established with the purpose of investing in income producing real estate used for industrial purposes in line with Shari’ah investment principles. Sabana REIT has a diversified portfolio of 18 industrial properties in Singapore with a total gross floor area or GFA of 4.1 million square feet.

Sabana REIT’s unit price has been on a downwards trend since April 2013 when it hit its peak of S$1.20. This is aligned with the significant decline in the REIT’s quarterly distribution per unit from above S$0.02 prior to 2014 to below S$0.01 since 2017. 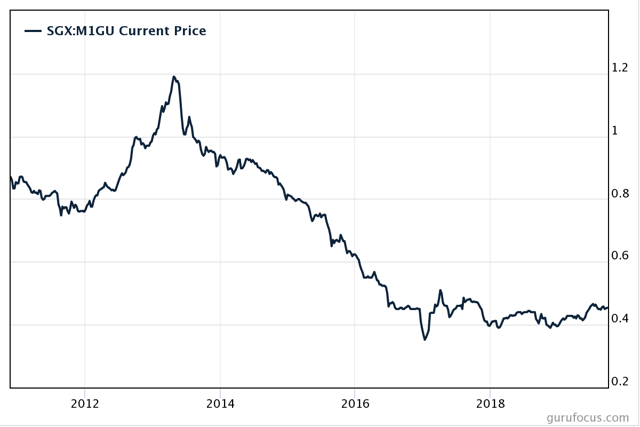 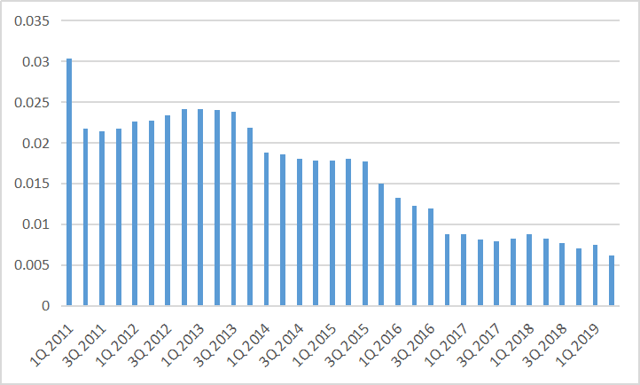 In January 2018, Mr Donald Han was appointed as the new CEO of Sabana REIT. Donald brought with him three decades of real estate experience, having served as Vice Chairman of Cushman & Wakefield (CWK) Singapore. Donald and his team were tasked with “driving changes at Sabana REIT to improve DPU (Distribution Per Unit)” as per the REIT’s press release.

Since Donald came on board, there has been some positive changes at Sabana REIT. Sabana REIT’s gearing (debt-to-assets) has declined from 38.2% in 4Q2017 to 30.9% in 2Q2019, which is now comfortably below the statutory gearing limit of 45% for Singapore-listed REITs. The REIT’s Net Asset Value or NAV per unit has also grown from S$0.5427 as of end-December 2017 to S$0.56 as of end-June 2019. However, Sabana REIT still has not managed to improve its distributions to unit holders, with quarterly DPU still in the S$0.006-S$0.008 range for the first two quarters of 2019. Also, Sabana REIT’s overall portfolio occupancy has remained low in the low-to-mid 80s range; the REIT’s target portfolio occupancy is 90%. Nevertheless, Sabana REIT continues to work hard at executing on its multi-year turnaround plans, which will be discussed in the sections below.

In the past one and a half years, Sabana REIT has been optimizing its property portfolio by divesting mature or non-performing assets and attracting new tenants.

9 Tai Seng Drive was a 218,905 sq ft six-story industrial building located within Tai Seng Industrial Estate in the north-eastern part of Singapore, and Sabana REIT managed to sell this property at 2.5 times book value. The S$99.6 million divestment proceeds from 9 Tai Seng Drive were primarily used to repay SS$100.0 million in debt in April 2019 which helped to reduce the REIT’s gearing significantly. Both disposals were also aligned with the REIT’s strategy of retaining prime properties located in the central region of Singapore which are relatively more resilient.

Sabana REIT is also well-positioned to capitalize on demand from tenants seeking office space outside the Central Business District or CBD where rents have been on the rise since 2017 as per the chart below. The REIT’s high-tech business parks such as New Tech Park, 23 Serangoon North Ave 5 and 8 Commonwealth Lane are among the properties that could be attractive to companies which wish to relocate part of their operations outside the CBD to save on occupancy costs. 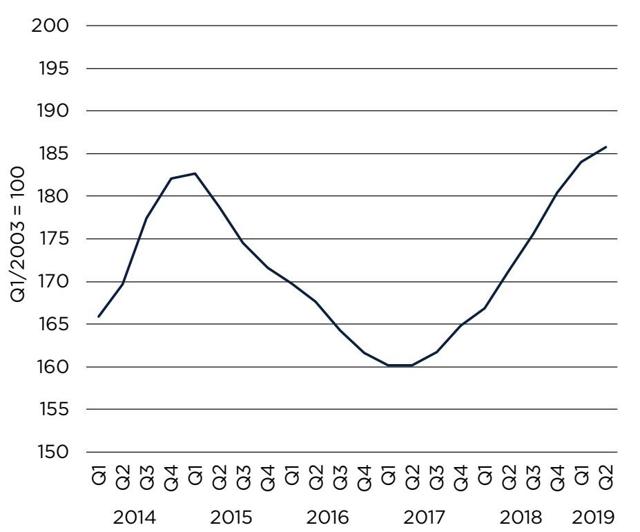 Apart from optimizing its portfolio via asset disposals and attracting new tenants, Sabana REIT has a major asset enhancement initiative, or AEI, in the pipeline. The REIT recently received approval from the Urban Redevelopment Authority in July 2019 for alterations and additions works for the first stage of AEI at New Tech Park, 151 Lorong Chuan; the entire AEI is expected to be completed in 4Q2020.

New Tech Park is a 30-year old, 810,710 sq ft six-story industrial building which is a major asset for Sabana REIT accounting for approximately a third of its portfolio value. New Tech Park serves as a regional or global headquarters for many multi-national companies such as Fuji Electric (OTCPK:FELTF) (OTCPK:FELTY), Kodak (KODK), HBO and Nickelodeon among others. The REIT saw an opportunity to unlock the value of the property, as New Tech Park’s existing plot ratio was 1.89 compared with the permissible plot ratio of 2.5, implying a potential additional 240,000 sq ft of GFA that could be added.

Sabana REIT plans to add an auditorium, a gym, and other new food & beverage and retail shops with a GFA of 42,800 sq ft as part of its AEI. The first phase of the AEI involving the first floor of New Tech Park will be completed by 2Q2020; while the second phase of AEI pertaining to renovation works for the canteen on the second floor of the building is expected to be completed by 4Q2020. I estimate that Sabana REIT could potentially double New Tech Park’s gross rental income in 2021.

The REIT’s AEI plans have helped it secure new tenants. In 2Q2019, it disclosed that it has secured two new leases for New Tech Park which will start contributing to its rental income starting 4Q2019. The two new tenants are a financial media & technology company and food & beverage company respectively.

Looking ahead, Sabana REIT also has other properties where existing plot ratios are below permissible levels, which could serve as future potential AEI projects for the REIT.

In the near-term, Sabana REIT’s turnaround plans are challenged by weak economic conditions in Singapore which have in turn adversely impacted the industrial property sector and the REIT itself.

Singapore’s GDP growth was +0.1% in 2Q2019, compared with +1.1% in 1Q2019, and the Ministry of Trade and Industry of Singapore has guided for a full-year 2019 GDP growth of 0.0%-1.0%, which was revised downwards from the prior forecast of 1.5%-2.5%. As an illustration of how the weak Singapore economy has affected the Singapore industrial property sector, see International Business Park. 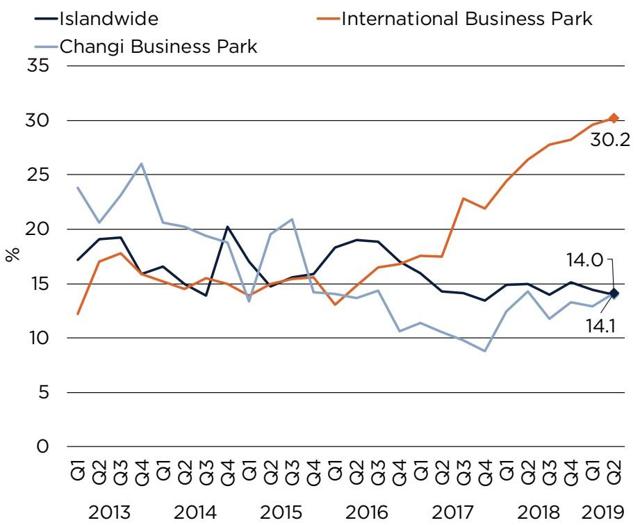 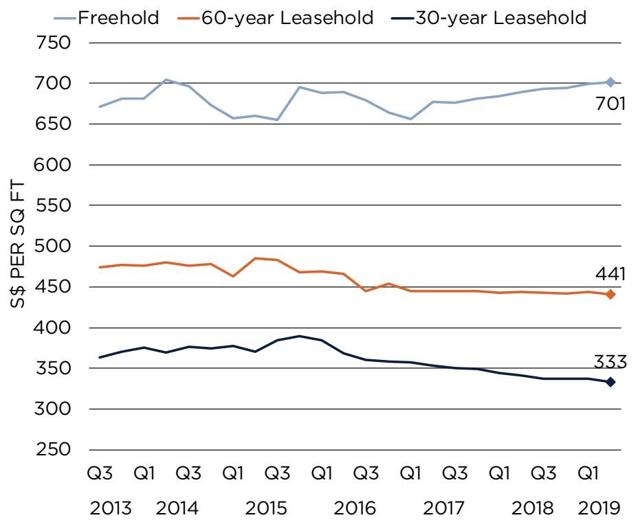 Sabana REIT’s revenue and net property income were down -9.3% and -4.2% YoY respectively for 2Q2019, as its overall portfolio occupancy fell from 84.5% in 2Q2018 to 83.2% in 2Q2019. Looking ahead, with a relatively short average portfolio lease term to expiry of 2.4 years and multi-tenanted properties (as opposed to master leases) accounting for two-thirds of its net lettable area or NLA, Sabana REIT’s overall portfolio occupancy rate and rental rates are subject to downward pressure. The REIT has 21.7% and 38.3% of its leases (in terms of NLA) expiring in 2019 and 2020 respectively, of which approximately half are multi-tenanted properties.

Given the murky outlook for the Singapore economy and the industrial property sector, organic growth is challenging and Sabana REIT might have to turn to inorganic growth drivers such as mergers or acquisitions or M&A.

Sabana REIT has guided that it will only consider acquisitions in 2020 and beyond. This makes sense as the REIT currently trades at a relatively high trailing distribution yield of 6.4%, which makes it difficult to acquire new assets at a sufficiently low price (and high yield) to make the acquisitions yield-accretive. If Sabana REIT’s portfolio optimization and asset enhancement initiatives work well in the next one to two years, the REIT’s valuation should be positively re-rated. With the REIT’s yield compressed, it will make Sabana REIT’s job to find yield-accretive acquisition targets much easier. Also, Sabana REIT’s current low 30.9% gearing as of end-2Q2019, significantly below the statutory gearing limit of 45% for Singapore-listed REITs, gives it sufficient debt headroom to pursue further acquisitions.

Another potential avenue of value creation for Sabana REIT’s unit holders is for it to be acquired by or merged with another REIT.

Logistics real estate developer ESR Cayman increased its equity interest in Sabana REIT to 21.4% following a series of transactions announced in May 2019. ESR Cayman is now Sabana REIT’s largest unit holder, and it also owns a 8.3% stake in another Singapore-listed industrial REIT, ESR-REIT [EREIT:SP]. Another common shareholder of both Sabana REIT and ESR-REIT is Chinese billionaire Mr Tong Jinquan; Mr Tong Jinquan has a 6.5% equity interest in Sabana REIT and he is ESR-REIT’s largest unit holder with a 33.9% deemed interest.

ESR-REIT has previously merged with another industrial REIT, Viva Industrial Trust in 2018. At a panel discussion as part of a REIT forum organized by media publication The Edge on August 26, 2019, the CEO of ESR-REIT’s manager, Mr Adrian Chui, did not rule out an acquisition or merger with Sabana REIT. But Mr Chui emphasized that he will assess Sabana REIT’s assets in the same way as any other assets, and he will only proceed if the transaction is accretive to ESR-REIT’s unit holders.

I will highlight in the next section how Sabana REIT trades at a discount to ESR-REIT and other industrial REITs, which suggests upside for current unit holders, if Sabana REIT were to be acquired by ESR-REIT at a premium in line with industry peer valuations.

Sabana REIT trades at 0.79 times P/B based on its net asset value per share of S$0.56 and its share price of S$0.445 as of September 27, 2019. This represents a discount to the REIT’s historical seven-year mid-point P/B ratio of approximately 0.90 times.

As per the peer comparison table, Sabana REIT has the second lowest P/B ratio and the fourth highest distribution yield among peers.

Editor’s Note: This article covers one or more microcap stocks. Please be aware of the risks associated with these stocks.