The limited trade agreement between the US and Japan boosted trade optimism that a similar deal could be struck between the US and China. Both sides continue to send mixed messages, but so far, the balance has been on the more positive side with a tentative meeting date set for October 10 to take the trade talks to another level.

The US dollar is mixed against major pairs at the end of the week, with the biggest losers being the GBP and the EUR. Stocks did not cross into positive territory despite the trade boost given the high levels of political uncertainty in Washington.

Safe havens were on the back foot as the dollar rose, but traders could turn to them once again if the price is right given the geopolitical uncertainty, in particular, the impeachment of US president Donald Trump.

The EUR/USD rose on Friday, but it was too little too late for the single currency that accrued a 0.68 percent drop in the last five trading sessions. Soft data and rising recession fears in Europe keep piling downward pressure on the euro. The economic calendar is taking a step back from the spotlight with all traders focusing on geopolitical events. The biggest economic indicator in the market will be released on Friday as the US non-farm payrolls (NFP) report shows a solid employment data point.

The dollar will trade between the tariff dispute with China and impeachment talk. For the time being, the dollar remains strong as European and Chinese data have put more pressure elsewhere and the unlikely event that President Trump is forced to step down at the time of writing. The Republican held Senate marks a dead end for the process, but that could change with the US-China trade deal unraveling yet again.

Bitcoin seems to be finding some support as investors are reminded that the lackluster debut of Bakkt should have been expected since this futures product launch is not providing any major advantages to institutional trade flows. The majority of the retail market already has the best liquidity, so this makes Bakkt look a little less appealing on the onset. Bakkt will likely be adopted by institutional platforms over time, but for now there is no urgency for the big boys to take advantage of this liquidity. 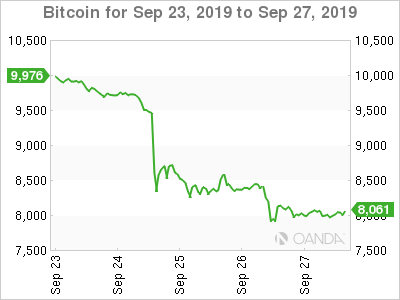 Oil West Texas Intermediate crude has now wiped away all the gains that stemmed from the Saudi oil field attacks. This key oil price gap has now been filled within two weeks and it seems price is tentatively finding support. The recent leg lower with crude prices occurred after Saudi Arabia agreed to a partial cease-fire in Yemen. This four-year war is unlikely to be ending soon and the risk premium is likely to return to crude prices. 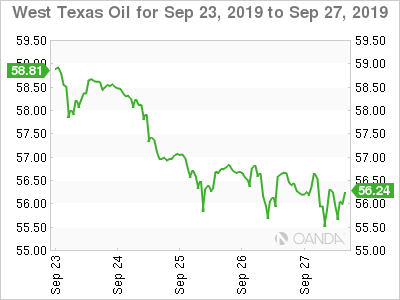 Gold prices slumped in early European trade after risk appetite drove all the major bourses higher. Gold has been stuck in a tight range as a strong dollar has minimized this week’s geopolitical risk driven safe-haven demand. Gold could breakout higher as we could see strong demand from India stem from the October 27th Diwali holiday. With August Indian imports seeming to be lackluster, we could see strong demand leading up to the holiday. 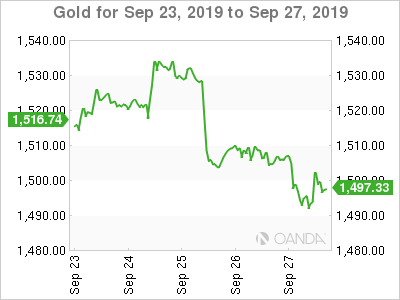 Parliament is back in session after the Supreme Court ruled the decision to prorogue Parliament unlawful. It’s not clear whether it changes much as far as Brexit is concerned, but the temperature in Westminster has certainly risen a few degrees. 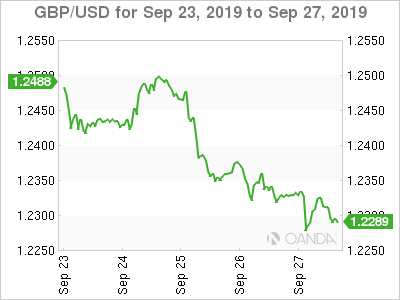 The Conservatives are still planning to push ahead with their party conference despite having no luck suspending Parliament for it. As this week has shown, there’s always heightened risk where Brexit is concerned, and with five weeks to go until the country may leave, this will continue to be the case.

Former Prime Minister Matteo Renzi has split from the Democratic Party to form a new group – Italy Alive – that will continue to support the coalition.
There are a number of lawmakers loyal to Renzi that could also break away, but exact numbers are hard to find. Minimal risk. Italian political instability is common and there’s little movement in Italian bonds to suggest this has bothered investors as the government remains stable. EUR unresponsive.

Snap elections scheduled for 10 November after the Socialist Party failed to form a coalition government, five months after winning the election. Minimal risk. EUR not responsive to Spanish politics, election will be fourth in four years.

Next Tuesday, October 1, remains a key date, China’s National Day, and Beijing will want nothing to detract from the pomp, ceremony and parades that are scheduled.

Local rumor mills suggest a big protest is planned and, as ever, the major risk will be a heavy-handed “clampdown”.

The Hang Seng is facing its second down week in a row, and the longer the protests drag on, the downside is seen as vulnerable. The risk of “crackdown” on October 1 celebrations is at its highest in a while. Nervousness at the start of next week will be paramount.

Pressure on China/HK shares may be unleashed, while USD/HKD is trading close to the upper limit of its permitted trading band. Asia risks being caught up in contagion risk.

The next phase of face-to-face trade negotiations is scheduled for the next couple of weeks. Now we are back to high-level talks and Trump’s comments that a deal could be “sooner than you think” is buoying risk appetite.

Market risk is that all the latest positive comments in front of the UN are just tactics to deflect attention from the impeachment proceedings.

It’s been quiet on the Korean peninsula this week, but there will always be the risk of further missile tests. More tests are possible, especially around China’s October 1 celebrations, as a headline grabber. It’s still regarded as an attention-grabber, but could escalate quickly.

There hasn’t been much news about the deteriorating bilateral relations on the India-Pakistan border at Kashmir this week.

It still remains a powder keg that could escalate very quickly. While not a global game-changer at the moment, a war between the two neighbours could hit risk appetite in the region and force superpowers from both East and West to be dragged into the skirmish and forced to choose sides. That would be a huge negative for risk appetite.

A relatively weak jobs report has seen local banks bringing forward their RBA rate cut expectations. Market pricing now suggests a 78% chance of a 25-bps cut at Tuesday’s meeting. A cut combined with a dovish outlook will put downward pressure on the Aussie.

The Banxico cut rates by 25 basis points as expected. The biggest shock came from the statement where it was clear the vote was not unanimous, but it was in fact because the majority of the council (3) voted for a 25 basis points cut, while 2 members dissented, voting for a 50 basis point cut. 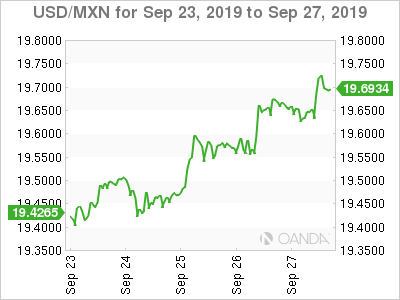 Inflation remains tame, and with the benchmark rate at 7.75%, there will be more rate cuts coming.

Central bank not seen as likely to jump to the peso’s defense despite depreciation but could change if geopolitical headwinds increase.

Presidential candidate Alberto Fernandez has tried to calm markets by promising if elected not to reduce the amount of debt that needs to be repaid. The IMF has not released the latest tranche of the line of credit fearing a default as Fernandez is the favourite to win the elections in October.

The central bank and the government have instituted mechanisms to stabilize the currency, but it still weakens as outside investors fear a default is coming despite some reassurances from the opposition.

The IMF is unlikely to release the next tranche of its loan until a new government is in place and can get some guarantees.

Market events to watch this week: