How to Trade Oil: Crude Oil Trading Strategies and Tips

Crude oil continues to weaken in the face of ongoing global economic growth worries, a build in inventories, Saudi Arabia’s plans to impose a partial cease-fire in Yemen and rumors just crossing the wires that the US is said to be willing to remove all sanctions on Iran in exchange for talks, although so far there has been no official confirmation or denial of these rumors. While taken together these reasons make a strong case for a bearish outlook for next week, the recent price slump nudges my outlook to neutral for the week ahead.

Ongoing global growth concerns are one of the principal drivers of a lower oil price and in particular China. While growth has already been trimmed lower, due in part to the ongoing US-China trade dispute, Chinese industrial output for August fell to 4.4% compared to a year earlier, the slowest rate of economic expansion in over 17 years. Chinese GDP fell to 6.2% in Q2 from 6.4% in Q1 and some analysts now expect to see a further decline when Q3 data are released.

Oil inventories continue to build, with DOE US crude oil inventories building by 2412k barrels, against expectations of 276k drawdown and a prior build of 1058k.

In a surprise move early Friday, Saudi Arabia is said to have offered Yemen a partial cease-fire to help defuse political tensions in the region, according to a report in the Wall Street Journal, citing unnamed sources. In addition, Saudi Arabia is said to have, or be nearing to, restored oil production in the region after drone attacks nearly two weeks ago shut down half its oil production in the area.

Crude oil has given back most its recent sharp gains, made on the back of the Saudi drone attacks and is nearing the recent uptrend off the August 7 $50.50/bbl low. Oil will need to respect this supportive trend line if it is to push higher in the days to come. 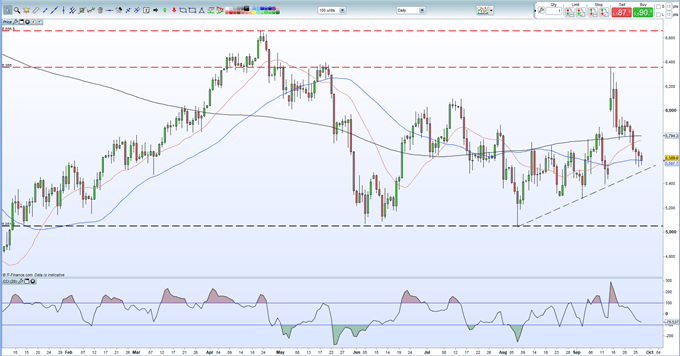 Traders may be interested in two of our trading guides – Traits of Successful Traders and Top Trading Lessons – while technical analysts are likely to be interested in our latest Elliott Wave Guide.

What is your view on Crude Oil – bullish or bearish?? You can let us know via the form at the end of this piece or you can contact the author at nicholas.cawley@ig.comor via Twitter @nickcawley1.