USD price action is starting the week on its front foot with the DXY Index – a popular basket of US Dollar currency pairs – edging roughly 0.2% higher to trade above the 98.50 level. Today’s upside in the US Dollar can be attributed predominantly to EURUSD wilting below 1.1000 in response to woeful PMI data released earlier in the session. The US Dollar initially jumped to its strongest level since September 12, but gave back nearly half of its gains after similarly disappointing PMI readings on the US services sector crossed the wires, which is the cornerstone of America’s economic engine and likely to grab the Federal Reserve’s attention if weakness is sustained.

The sharp jump in the greenback on Monday morning lost altitude after the DXY Index touched its short-term downtrend line I highlighted in my previous US Dollar price volatility report, but still trades comfortably above its 20-DMA and has now eclipsed the 23.6% Fibonacci retracement level of its bullish leg since late June. With the US Dollar facing a measured breakout from its symmetrical triangle, forex traders could shift focus from the charts to the September US Consumer Confidence report scheduled for release Tuesday at 14:00 GMT.

In Chair Powell’s press conference following the September FOMC rate cut, he stated that the central bank has “a very powerful tool” that can be used to counteract economic weakness “by reducing interest burden and encouraging consumer purchases of durables, of homes and other interest sensitive items, by creating broadly more accommodative financial conditions, which supports spending.” As such, worrisome declines in US consumer confidence data could serve as a precursor to even looser Fed monetary policy down the road. If materialized, this would likely bode ill for the US Dollar. 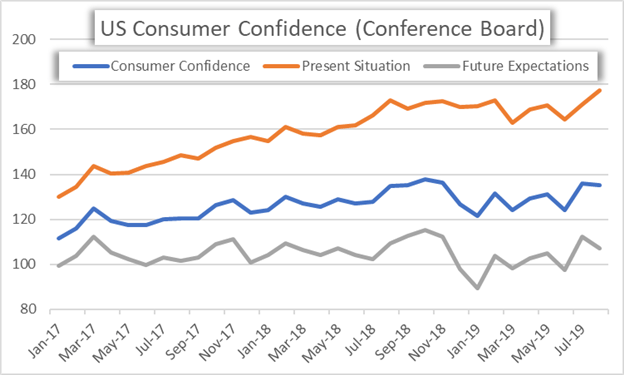 Despite lingering US-China trade war uncertainty and its domineering impact on slowing global GDP growth, US consumer confidence has remained quite resilient. In fact, the Citi US Economic Surprise Index has climbed to its strongest reading in over a year after a string of better-than-expected reports on the US economy, which has driven the Conference Board’s Present Situation Index to a business cycle high. Nevertheless, tariff whiplash between the US and China last month could have a lagged effect and drag the headline September consumer confidence report figure lower in addition to the present situation and future expectations components. At the same time, the Fed’s increasingly dovish tilt and willingness to insulate the US economy from trade war headwinds could keep consumer confidence bolstered. 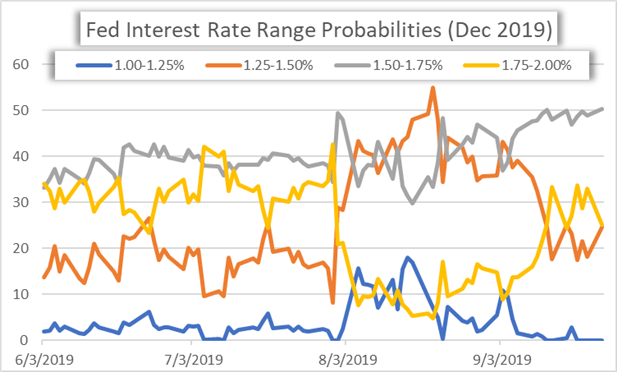 Although Tuesday’s consumer confidence report won’t single-handedly sway Chair Powell and the Fed to cut rates for a third time this year, it certainly will be taken into consideration when weighing monetary policy decisions down the road. Correspondingly, a solid reading on US consumer confidence could cause traders to modestly unwind Fed rate cut bets whereas a disappointing report might lead to a more aggressive response and call for further dovish action. According to the latest overnight swaps data pulled from Bloomberg, markets are currently pricing a 75% probability that another Fed rate cut is in the cards by year-end.

US Dollar currency volatility has drifted lower since spiking in the runup to last week’s FOMC rate decision, but appears to be back on the rise with high-impact economic data readings and event risk on deck. Check out the DailyFX Economic Calendar for a comprehensive list of potential catalysts that could spark volatility across global markets in the days ahead.