Looking for longer-term forecasts on the US Dollar? Check out the DailyFX Trading Guides.

The week after the September Fed meeting initially produced great volatility, but not much direction, for the US Dollar. But as Fed rate cut expectations pullback amid the truce in the US-China trade war, the DXY Index has been able to unshackle itself from the “race to the bottom” among the G10 currencies’ central banks. Now that the end of the month and quarter is upon us, and the September US nonfarm payroll report coming into focus next Friday, traders should be anticipating more volatility across USD-pairs.

With the US-China trade war ina short-term truce, US Treasury yields have been able to recover ground in recent weeks. In fact, the scope and scale of the US Treasury yield rally since the start of September has seen the US yield curve move out of inversion territory at key points; it would stand to reason that near-term US recession odds are dropping as well.

Parallel shifts in short-end and long-end rates suggest that investors’ expectations for the Fed’s rate cut cycle haven’t changed significantly over the past week. Moreover, the shifts in the US Treasury yield curve in recent weeks not only suggests that the Fed rate cycle won’t be as deep as previously envisioned, but that concerns over an immediate US recession are fading too. 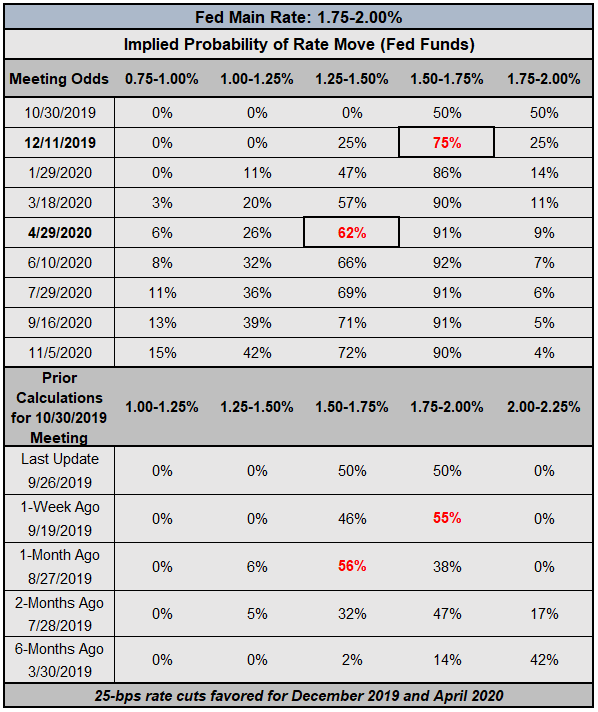 Rate cut odds have faded in the week following the September Fed meeting. One week ago, there was a 55% chance of a 25-bps rate cut in October; one month ago, there was a 56% chance. It would appear the next Fed rate cut is a question of “when,” not “if” – a rate cut will come in one of the last two meetings of 2019.

We can measure whether a rate cut is being priced-in using Eurodollar contracts by examining the difference in borrowing costs for commercial banks over a specific time horizon in the future. Eurodollar contracts continue to be closely aligned with Fed funds regarding the scope and scale of the Fed rate cut cycle. 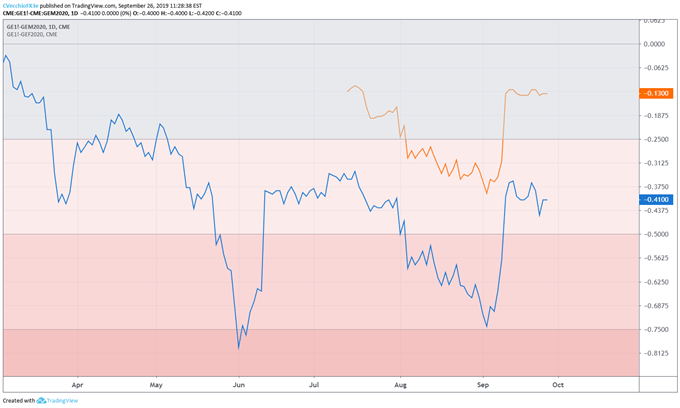 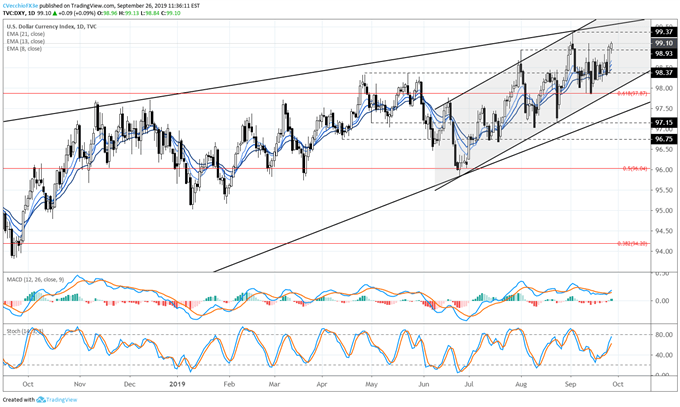 There’s no other way to describe the situation at hand: the DXY Index has proven incredibly resilient in recent days. The return to the 61.8% retracement of the 2017 high/2018 low range at 97.87 proved to be a minor setback, and the ascending channel in place since June remains intact.

To this end, the DXY Index’s bullish momentum profile has strengthened in recent days. Price is firmly above the daily 8-, 13-, and 21-EMA envelope, which is in bullish sequential order. Daily MACD continues to has issued a buy signal in bullish territory, while Slow Stochastics are quickly advancing to overbought territory. Above 99.04, there will be a fresh closing high in place for the DXY Index with little standing in the way of a run to the yearly high at 99.37. 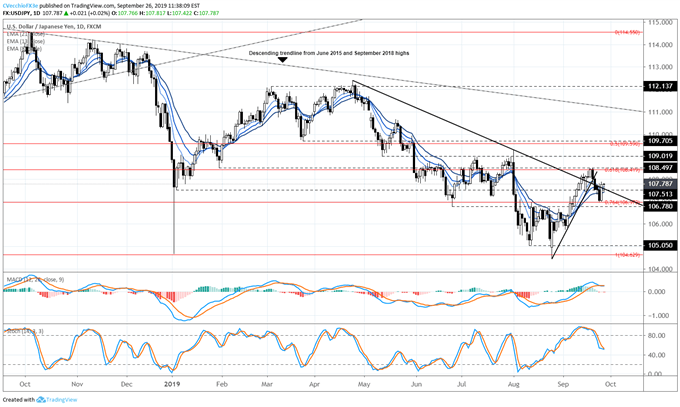 USDJPY has not made much progress after achieving several significant technical progressions to the topside in early-September: breaking above the June low and 76.4% retracement of the 2018 to 2019 high/low range near 106.78/97; and the descending trendline from the April 24 and July 10 swing highs. 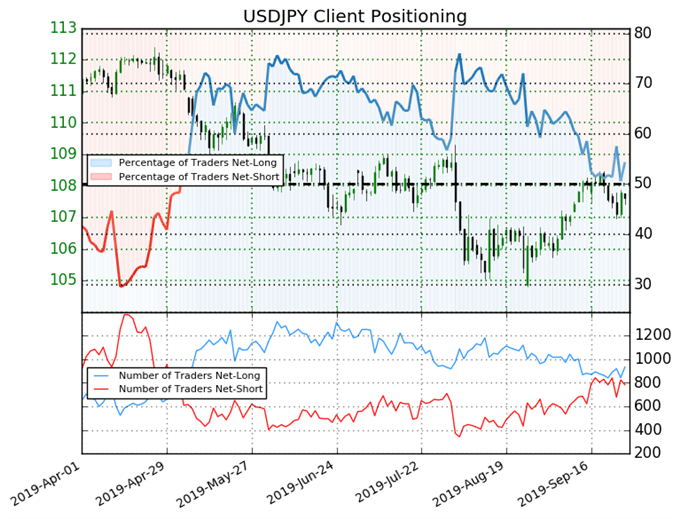 We typically take a contrarian view to crowd sentiment, and the fact traders are net-long suggests USDJPY prices may continue to fall. Traders are further net-long than yesterday and last week, and the combination of current sentiment and recent changes gives us a stronger USDJPY-bearish contrarian trading bias.

View our long-term forecasts with the DailyFX Trading Guides