Costco Wholesale (NASDAQ:COST) has seen its shares rise significantly in 2019 so far. Those that have bought along the way have been rewarded with further gains. Recently, however, the stock has pulled off the highs somewhat, creating the potential for a buying opportunity. In this article, I go over the performance so far this year, a discussion of relative valuation, and I identify two spots at trendline support one may want to consider buying.

Costco is a business firing on all cylinders. The company has seen its stock price increase over 40% year-to-date, while the S&P 500 ETF, SPY, has increased just 2%. The retail ETF, XRT, has put up a respectable 19% gain.

Investors in Costco have been rewarded for buying the dip this year as the stock has virtually gone straight up. Earnings and revenue forecasts have increased, and the company continues to expand internationally.

The launch of Costco’s first store in China was a huge success. So, successful in fact, it had to shut down on the first day due to overcrowding. China is a huge opportunity for Costco, as the population could allow for Costco to open hundreds of more stores just in that country alone. The growth runway for Costco remains very very long. Investors should look to enter this stock on pullbacks.

If you haven’t pulled the trigger yet on Costco shares, here I present two spots that could be solid entries. I always like to buy great stocks on pullbacks rather than breakouts, and that is exactly what’s happening here.

The stock has pulled back to the 4-month trendline. This trendline could act as support before the stock makes another move higher, thus aggressive buyers should look to start a position here. Long-term investors could use this as an opportunity to begin allocating capital that has been stagnant on the sidelines. However, they may be even better served looking at a longer term chart. 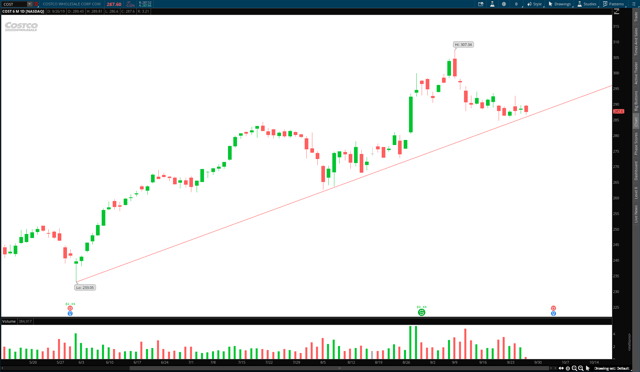 Zooming out to a 1-year chart shows yet another trendline. This one is longer-term and is a less aggressive spot to look for an entry. This is the one I am personally watching for a place to buy shares. 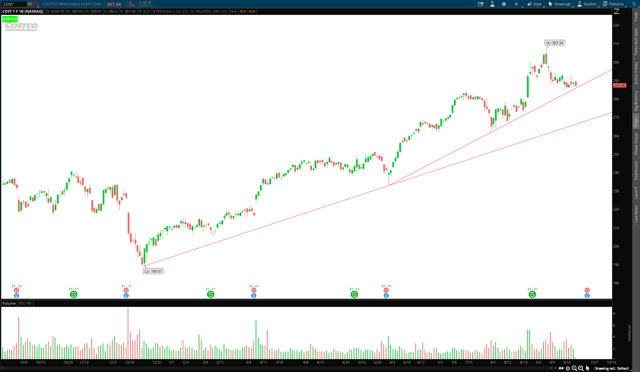 A pullback to this 1-year trendline would put shares around $270 – a pullback of around 12% from the highs. Rarely does Costco decline more than 20%. Just look at a 20-year chart. The stock holds up through anything short of a financial crisis.

For those concerned about valuation here, I would value Costco relative to subscription companies rather than most other retailers. I would argue companies like Amazon (AMZN) make a better comparison than one like Walmart (NYSE:WMT).

Rarely do I see analysts comparing Amazon and Costco. One is an online retailer with a multitude of other businesses, and the other is a brick and mortar retailer. However, the similarities are more than one might initially think. Both require memberships to take full advantage of product offerings. Both are continually investing at high rates of return on invested capital. Both have plenty of expansion left. Both have similar competitive advantages in being low-cost retailers, just though two separate mediums.

Despite these similarities, Costco still trades well under Amazon’s valuation, yet only slightly above the valuation of Walmart. Costco’s competitive advantage is applicable worldwide, whereas I believe Walmart’s is not. This is evidenced by Walmart’s failures to expand internationally, and Costco’s unrivaled success internationally.

Costco’s valuation here is not as unreasonable as one might think when comparing the P/E ratio to that of other retailers. The EV/EBITDA ratio is a very reasonable 18. While Costco is not the cheapest stock on the board, it certainly isn’t the most expensive either. Costco remains one of the best businesses in the world, and those who have bought it have been rewarded. With future catalysts like further expansion in China and an increasing mix to online sales, Costco still has plenty of room to grow.

Great businesses often trade at a premium. Rarely do they give opportunities to get in at lower prices. Costco is doing exactly that right now, and the valuation, while some may consider high, is actually quite reasonable. The stock is pulling back to trendline support and has the potential to set up for another leg up. Investors that use this opportunity to buy or add to their Costco position at these two trendlines should do well long term.

Disclosure: I/we have no positions in any stocks mentioned, but may initiate a long position in COST over the next 72 hours. I wrote this article myself, and it expresses my own opinions. I am not receiving compensation for it (other than from Seeking Alpha). I have no business relationship with any company whose stock is mentioned in this article.