The Boeing Company (BA) will be publishing its third quarter on the 23rd of October before the opening bell. In this report, we will have a look at analyst expectations, earnings as projected by our model and what risks there are surrounding Boeing’s share price, if any.

We’d like to emphasize that these earnings estimates are in no way intended to shock or take a contrary stance as some readers seem to be expecting each quarter. Sometimes when the EPS indications are in line with what analysts expect, we’re being asked why we even bothered writing a report with our expectations. The reason is that most of you will go and look at analyst estimates and say “Hey, this is the consensus.”

In this report, we’re showing you our assumptions and calculations and that’s where the AeroAnalysis International report differs from just looking up the consensus. Sometimes our findings match the consensus, but that does not mean we should not write about that. There are a lot of elements that affect the reported figures, and in these reports, we’re showing how certain moving elements affect estimated earnings.

This piece does not constitute any buying or selling recommendation based on any differential between our estimate and realized figures. Far more importantly, we’d like our readers to see in detail how we got to the core earnings figures as an informational piece.

With the Boeing Global Services unit being added in 2017, the number of possible combinations of margins and revenues adds up significantly. So, while we do like to provide several scenarios, we will limit ourselves here to nine at most and that already represent a lot of combinations. What you should pay special attention to is the impact that a 0.5-point margin difference has on the earnings per share. This is partly caused by the revenue streams multiplied by a margin that already cause quite a big difference, and this is further amplified by the share count coming down. Over the past four years, the share count has come down by more than 20%. This obviously drives value to shareholders, but it also means that any earnings beat or miss looks much larger than it previously would have.

One thing investors should be aware of is that the revenue recognition for services and military aircraft derived from commercial aircraft is hard to predict as revenues from services occur as these services activities are performed. For Services there should be a nice layering of revenues. However, for military aircraft the costs are being recognized during the production process it seems, and at this stage we don’t know a single thing about revenue distribution for military deliveries.

In 2019, Boeing started attributing costs and revenues from military aircraft such as the Boeing KC-46A and Boeing P-8A that are derived from commercial base models to the military segment. Results from 2018 have been restated accordingly but still do provide a renewed challenge for us to estimate performance across all core businesses of the company, since Boeing Global Services reported figures now also include revenues from the KLX Aerospace Solutions Group that Boeing acquired last year.

If these changes did not provide for a big enough challenge to estimate the revenues and earnings, the current problems with the Boeing 737 MAX do provide a lot of uncertainty with respect to earnings. If our assumptions drastically differ from Boeing’s execution during the quarter, our estimates might significantly differ from realized results and we urge readers to take this into account when reading the report.

Revenues are quite difficult to pin down. Theoretically, for the Defense & Space unit, we can look at sales contracts to determine the values. The unknown, however, is when deliveries occur and how much of the revenue is being recognized upon delivery. So, while the contracts and values are available, it’s hard – and we think almost undoable – to connect the deliveries occurring in a certain quarter to specific contracts, values and revenues. To come up with revenues for the Defense, Space & Security unit, a quarterly distribution of the segment revenue is used.

For commercial aircraft, a similar thing holds. Contracts for commercial aircraft are not publicly available and the pricing varies from customer to customer. With more than 75 deliveries targeted per month on average when delivery profiles aren’t pressured, it’s also difficult to treat each delivery as a delivery with unique pricing and discounts. Instead, average pricing is used to estimate revenues of the Boeing Commercial Airplanes unit.

At the start of the second half of 2017, Boeing elevated its services unit to operate on the same level as the Defense and Commercial Airplanes units. Decoupling this services unit from BCA and BDS emphasizes the importance and growth prospect of the Global Services unit and also should allow the business to operate more efficiently. What we like about this newly formed unit is that its revenues are more or less constant throughout the year with solid margins. With Boeing’s renewed focus in the after sales market, there’s a lot of room for growth in this particular area.

For the Commercial Airplanes department, deliveries have decreased sharply year-over-year, driven by the delivery stop for the Boeing 737 MAX. As a result, based on our internal modeling, we’re expecting revenues of roughly $7.47B, signaling a 52% decline compared to Boeing’s restated revenues for the third quarter of 2018. This reduction in revenues really shows the importance of Boeing’s single aisle aircraft business.

Revenues from the Defense, Space & Security and Global Services segment have proven to be more difficult to estimate since it’s somewhat harder to estimate the revenues for the Network, Space & Systems and the Global Services & Support segment. Using the distribution of revenues throughout the year, we’re expecting revenues between $7B and $7.3B.

We expect revenues to come in between $19.3B-$19.7B. From previous quarters, we do know that there have been times that we have been too conservative in our estimates. We could try and factor this in, but it would defeat the purpose of the calculation models. Therefore, we’ve chosen to present the numbers as is without correctors. Correctors are nice, but with a business such as Boeing’s even the correctors do not remain stable, so the implementation of a corrector would require a corrector-predictor and we think that’s something where we shouldn’t go. Our estimate is $800 million lower than the consensus.

Estimating revenues already is quite difficult. Estimating earnings is even more challenging. In the case of charges, the earnings figures will be far off in comparison to the estimates if they aren’t accounted for beforehand. For the second quarter, we do expect no cost growth other than the $4.9B after tax charge that already has been announced. 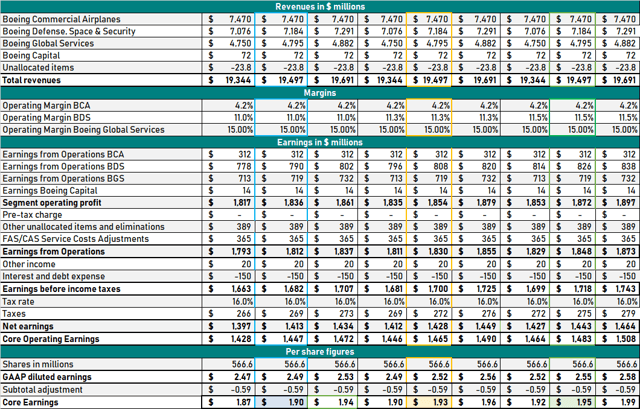 What you see is quite a range of core earnings estimates and that requires some explanation. First of all, the reason to supply a range rather than one revenue figure or margins is to show what a half percent here or there does to earnings, and that’s quite sensitive since a .5 point difference in margins in Boeing Commercial Airplanes leads to a $0.11 change in core earnings per share and ~$0.20 per share if there’s a change of 0.5 points on all segments. Secondly, it might give an idea on how other analysts came to their core earnings estimates.

With Boeing consisting of three main segments, the number of possible margin and revenue couples increases as well. We are certainly not looking at all combinations, since there are many and too many to analyze in a useful way. We have three revenue estimates and each of these is coupled to three margin groups, so we end up with nine ways to drill down to core earnings per share.

Possibly, we will see Boeing “benefiting” from a lower effective tax rate which could increase earnings by $0.06 per share, and there are some other items such as FAS/CAS adjustments, unallocated items and interest payments that can skew the EPS. So, I wouldn’t say with certainty that current analyst estimates for the third quarter are too high.

Important for Boeing shareholders will be the cash flow profile, which is even harder to estimate than earnings and revenues. At this point, we’re expecting a dent in Boeing’s free cash flow profile due to the delivery stop on the Boeing 737 MAX program. The stop could shave off $2B-$3B in cash flows, but it remains to be seen whether Boeing has been able to quickly adapt its receipts and expenditures profile to minimize the in-quarter impact. 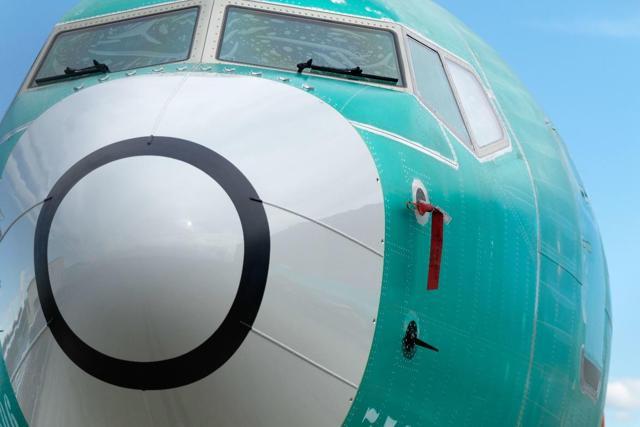 A year ago, nobody would have expected that the Boeing 737 MAX would be considered a risk, but the truth is that going from Q3 2018 to Q3 2019 the world looks a whole lot different to Boeing, airlines and the traveling public. Days after Boeing reported Q3 2018 results, the first crash with the Boeing 737 MAX occurred. It would be the start of a revelation of what went wrong in the design and certification process of the Boeing 737 MAX. At this stage the Boeing 737 MAX is a risk to Boeing’s financial performance. As long as the delivery stop lasts and the aircraft remains grounded, Boeing is facing possible compensation requests from customers as well as lower revenues that stretch beyond the charge Boeing has recognized during its second quarter. It will be interesting to see whether Boeing will update its estimates for a return-to-service during in the third quarter earnings report, any change will likely also have financial consequences and might impact the program production rate.

We’re expecting a challenging quarter with significant pressure on Boeing’s earnings. We’re hoping to see earnings between $1.85 and $2.00 per share (possibly even $2.10 per share).

One thing that should be noted is that if Boeing recognizes charges during the quarter in excess to what has been estimated, it’s highly likely it will not reach estimated EPS numbers. We do think in that case you should still be looking at the margins excluding one-off items and the cash flow to assess the in-quarter performance. Investors also should be aware that in upcoming quarters there might be further cost growth if schedules slip or estimates change.

With the announcement of the charge to be recognizing in the second quarter results, Boeing has provided some clarity, but the road ahead remains an uncertain one. The third quarter likely won’t be a nice quarter for Boeing. In absence of charges I do not expect the company to be loss-making, but we will see Boeing’s performance without a single aisle product to lift earnings.

Normally our “sentiment table” has rows for good and strong EPS ranges, but I think at this point you can’t speak of good or strong earnings. Earnings could possibly surprise but they won’t be good or strong.

Our sentiment table for upcoming earnings:

What’s going to be interesting to see in Boeing’s earnings report is whether they will be reporting any tax benefit. Any tax benefit report could significantly improve the reported EPS.

Let me know in the comment section what you think about Boeing’s upcoming quarter results. Will it beat, miss or match the consensus?

If you like our regular coverage, please consider joining The Aerospace Forum which gives you more indepth tools to understand the industry, access to over 750+ previously published reports and ways (Live chat with the group and one-on-one conversations) to discuss the aerospace industry.

Disclosure: I am/we are long BA, EADSF. I wrote this article myself, and it expresses my own opinions. I am not receiving compensation for it (other than from Seeking Alpha). I have no business relationship with any company whose stock is mentioned in this article.