Occasionally, I spot a good name that I believe has been passed on or has fallen by the wayside. At a gross margin of 89%, TTM FCF % of revenue of 56%, and EV/EBITDA of 16.7, the slumping growth narrative (FY’19 target of 4%) has kept investors on the sideline. However, given Check Point’s (CHKP) solid financials and management’s ability to generate strong return on investment capital, Check Point is a must add to your portfolio.

The market today is after names that can deliver a FAAMG-like growth. I’m referring to the growth that the likes of Facebook (FB), Apple (AAPL), Amazon (AMZN), Microsoft (MSFT), and Google (NASDAQ:GOOG) (NASDAQ:GOOGL) have produced. These giants have raised the bar for the type of growth expected of tech companies.

Therefore, when you see a name like Check Point struggling to deliver 5% y/y revenue growth, it’s easy to overlook every other good thing about the company. This is where the underpricing occurs as the lack of growth has led a lot of investors to ignore the inherent value and potential of this stock.

Check Point is one of the healthiest names in the cybersecurity industry. Its gross margin, profit margin, and FCF margin dwarfs most of its competitors.

Where the valuation decoupling is coming from is the shift to cloud security, the cybersecurity industry is witnessing. Check Point is primarily an appliance-based vendor. Though in recent years, it has made acquisitions to beef up its capabilities in cloud security and AI-driven solutions. Nevertheless, it has been unable to catch up with the momentum of high flyers like Fortinet (FTNT) and Palo Alto Networks (PANW).

Management has longed favored the strategy of preserving margins; however, it looks like investors will rather sacrifice all that margin for growth. This makes logical sense, given that plays like Palo Alto continuously talk about their success replacing competitors like Check Point during RFPs and refresh cycles.

Preserving customers is cheaper than winning them back from competitors. This is the best time to make the market share preservation sacrifice as the cost of acquiring new customers will continue to rise as the low hanging fruit gets picked.

If the present is any indicator, we are yet to scratch the surface of what the cybersecurity market will sprout into. It’s a market that will continue to thrive on the proliferation of internet-enabled devices, fast internet speed, and the declining cost of data. Therefore, the best operating strategy for Check Point is to sacrifice some of its profit margins for market share acquisition. If management continues to overlook growth in favor of margin preservation, Check Point will begin to trade on hopes for multiple expansion. This is dangerous, given that Palo Alto spent a decent part of its last earnings call marketing its next-generation of cybersecurity solutions and how it intends to displace weaker competitors.

Check Point is releasing new products. However, management isn’t as excited about them as much as competitors tout their offerings. This is not helping sentiments towards the stock with Bank of America analyst Tal Liani, downgrading the stock from Buy to Underperform while citing “competitive pressure with CHKP consistently losing share over the last 4-5 years to firewall peers.” 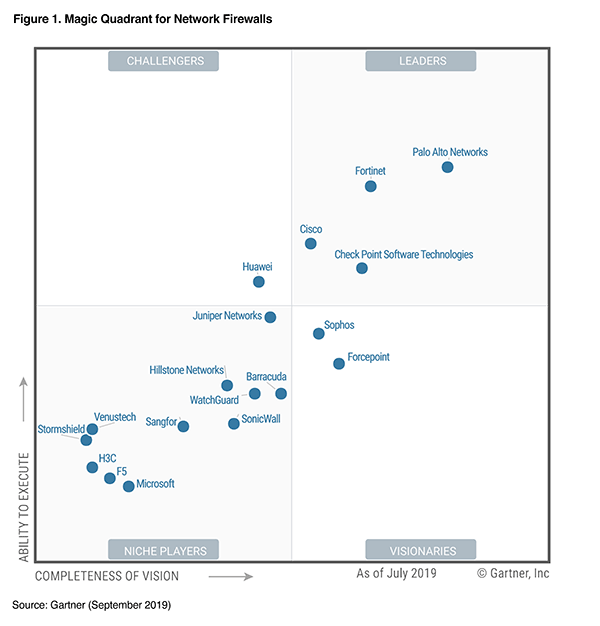 Regardless, Check Point remains a leader in the network firewall space, though it is conceding its podium spot to the trio of Fortinet, Cisco (NASDAQ:CSCO), and Palo Alto Networks.

The revenue estimate for 2019 currently stands at $1.99 billion, second only to Palo Alto amongst pure-play network security vendors. Its 2020 growth estimate of 4% isn’t too encouraging. Though operating expense growth has now accelerated from 4.5% in 2017 to 14% TTM. The fact that revenue growth isn’t picking up as expected is a harbinger that the cost of capital required to pick the low hanging fruit is increasing. On a brighter note, interest and investment income have been growing in the mid-teens, though I’ll have preferred that the growth is from revenue. This has helped net income margin remain at 38%, a steep deceleration from the 45% peak in Q4’18. Though the company has instituted a share buyback program, it hasn’t been enough to cushion the effect of the operating expense growth, which led to the EPS fall of 3% last quarter.

Check Point has a healthy balance sheet with cash and short-term investments of $1.6 billion (28% of assets), a slight decline from the all-time high due to its recent acquisitions. Accounts receivables have declined, which is a good sign. Long-term investments stand at 43% of assets. Lastly, the company has zero debt on its balance sheet. 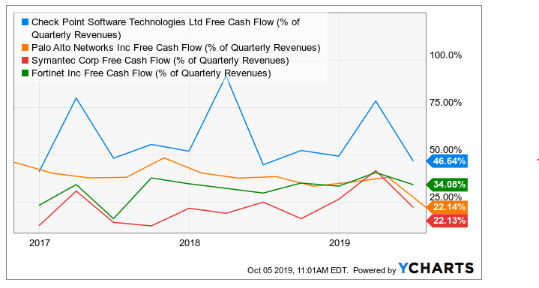 Check Point’s earnings (71%) drive the bulk of its operating cash flow. Unlike most competitors, whose cash flow are driven by stock-based compensation; this is healthier. Check Point isn’t aggressively spending on CAPEX, which means free cash flow can be moderately modeled to be inline or continue to grow in the coming quarters. FCF % of revenue currently stands at 56%, which is the best amongst its peers.

The near-term worries are the sluggish product growth, which has been neutralized by strong subscription growth, and the flat billings growth, though deferred revenue grew at 11% in the most recent quarter.

Overall, Check Point’s financials are attractive. The main concern will be the declining revenue growth rate and the shrinking operating margin as management bumps up spend to re-accelerate growth.

Check Point has a P/S of 8.7. This is within the valuation range of its high-growth counterparts. It trades at an EV/EBITDA of 16.7 and a market cap of $16.9 billion. Unlike its unprofitable peers, Check Point has a positive ROA (9.9%) and ROE (22%). The average analysts’ price target is $121, which means the stock is currently trading at a discount to analysts’ consensus.

Though the company has suffered downgrades in the past few weeks, coupled with Palo Alto reporting its usual quarterly displacement of competitors, which, as expected, includes Check Point, Check Point remains a force to be reckoned with in the network and cloud security space. The company has introduced new cloud solutions strengthened by the acquisition of Dome9 and Forcenock, coupled with the recent release of some high-performance firewalls. There is strong demand for the SandBlast Zero-day threat prevention solution, and management is also recording growing demand for the Infinity platform. These offerings have the potential of driving revenue in the short term as Check Point’s solutions are highly ranked according to third party testing sites.

Check Point won’t witness any margin expansion unless management communicates the desire to accelerate growth. Like a startup trying to raise funds, the narrative is back in the hands of management, and they have it in their power to decide if they will be willing to sacrifice more portion of the company’s profit margin to seek growth. The near-term tailwinds from investments in cloud security is a good sign. For investors seeking a stock with solid intrinsic value with the optionality of the growth that most safe-haven assets don’t posses, this is the right stock for you. Downsides are capped due to its superior margins and healthy balance sheet, and the risk/reward is clearly tilted towards more upside in the long term.

I will be reiterating a BUY rating with a PT of $134, which gives a market cap of $17.3 billion using shares outstanding of 160 million, driven by its superior FCF margin which stands at 56% of revenue.