In our previous article on Chinese FinTech sector earlier this year, we concluded that the outlook on the market was still not clear that time. Recent regulatory changes and Q2 earnings results from the companies lead us to believe that the industry is heading to a stabilized stage, which presents good opportunity for long-term investors. Companies that are delivering great growth numbers and are valued at discount should be on the radar of investors.

An Update on Regulatory Changes

The FinTech industry has been one of the most intensively regulated sectors in China. The sector, which contributed the largest number of IPOs in US market in the past two years, has gone through barbaric growth since 2015. The explosion of market size brought a lot of chaos into the sector, which eventually led to the regulatory intervention.

Earlier this year, when we published our last article on the sector, we still felt that the regulatory impact was somewhat “unclear”. At that time, the focus of regulation seem to be implementing compliance inspection, both internally and externally, to make sure that the lenders have the required risk management capabilities and meet the compliance requirements. However, there is no evidence at that time as who would pass the inspection and what will happen if they failed. According to Mr. Yihan Fang (the CEO of Yirendai, NYSE:YRD) in Q4 2018 earnings call, the company’s P2P compliance and inspection process was still going on:

In July, China’s regulatory agency for Online Lenders, known as the Specialized Regulatory Group for Online Lending, stated that they have completed the inspection on about 430 institutions. As the inspection goes on, the overall number of online lenders has been declining (from thousands to around 700), showing the remediation of industry-wise systematic risk. The focus of next phase (second half of 2019), according to the agency, is to continue the effort in the industry-wise inspections, with the goal of further reducing the number of qualified players in the market. We think the increasing scrutiny from the supply side will have a positive impact on the sector in the long run.

On the demand side, starting September, the regulatory agency required Peer-to-Peer online lenders to report the information regarding lost trustees to the centralized credit system. Previously, China’s centralized credit system (managed by the Central Bank) only covers about 150 MM people, leaving almost 90% of the nation’s population not traceable in regard of credit history. This led to the situation where a single borrower could be funded by multiple lenders who have no idea about the real debt level of this person. We think the enforcement on credit information reporting is another big step in the standardization of the industry.

Overall, we think the regulation on China’s FinTech sector has become much clearer and more transparent. This is a great plus for the long-term growth of the industry and especially positive for leading players in the market.

As we described in our previous article, there are three major business models deployed by the listed companies in this sector: marketplace model, service provider, and consumption related lending.

When we look back on the market movements in the past few months, there has been apparently some separation regarding share price movements: 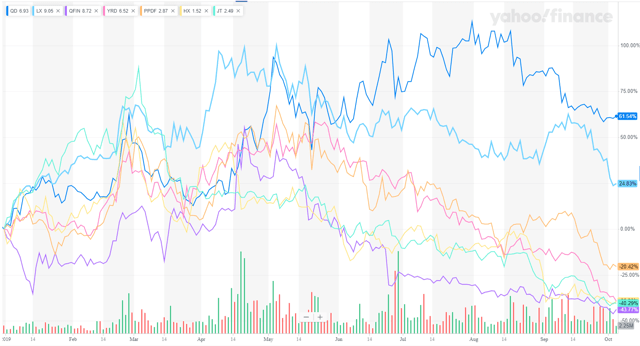 As the leading players in the consumption related lending segment, Qudian (NASDAQ: QD) and Lexin Fintech (NASDAQ: LX) are the only gainers on a YTD basis. QD’s posted more than 60% price appreciation during 2019, and LX achieved about 25%. Others see share price down from 20% to over 40% during the same period. The divergence regarding share price performance was driven primarily by the overall regulatory tune, that online lending with specific consumption demand is encouraged by the government, while pure generic unsecured lending is facing more scrutiny due to the high risk and economy slowdown.

Well aware of that, traditional lenders started to adapt their business strategies to the market environment. Yirendai, as the very first FinTech company listed in the US, reported to switch from a P2P lender into a “Digital Personal Financial Service” company. They will have to go through the transition pain moving out of their comfort zone where they built up their business in the first place.

Currently, our basic take on the sector is that the environment is stabilizing, and key players are trying to find their own competitive advantages across the market. With that in mind, we suggest investors to watch out for some good targets at this stage. There are companies that delivered great growth results such as Paipaidai (NASDAQ: PPDF), whose operating revenue achieved a 47% year-over-year in Q2 2019, but the valuation remains surprisingly cheap both at absolute level and relatively:

So overall, we suggest the investors to put certain companies at their radar, including QD, PPDF, LX, who have been delivering good growth results but are largely undervalued by the market.