Crude oil prices are on pace to finish the week on an upbeat tone and put an end to the commodity’s 10-day straight losing streak. Since last month’s supply shock owing to the Saudi Arabia pipeline attack, the price of crude oil has edged roughly 15% lower amid resurfacing recession fears driven by disappointing PMI data releases. Crude oil prices are beginning to show signs of rebounding, however, as the commodity finds buoyancy around a major technical level.

Meanwhile, the market’s expectations for front-loaded FOMC rate cuts have spiked, which boosts prospects for future economic growth and crude oil demand in turn. At the same time, an overall healthy nonfarm payrolls report suggests that the US labor market – the cornerstone of America’s economy – remains on solid footing and has caused traders to reassess the overdone selloff in risk assets earlier this week.

Filtering out the daily noise by taking a look at the weekly chart, we see the overarching pennant pattern formation as prices coil between higher lows and lower highs over the last year. Recent downside in the price of crude oil has pushed the RSI back below 50 while the MACD crossed into negative territory, which suggests selling pressure might persist.

That said, the selloff over the last two weeks could reaccelerate if technical support provided by the August 2019 swing low and the mid-point retracement of crude oil’s bullish leg from February 2016 to October 2018 fails to keep prices afloat. 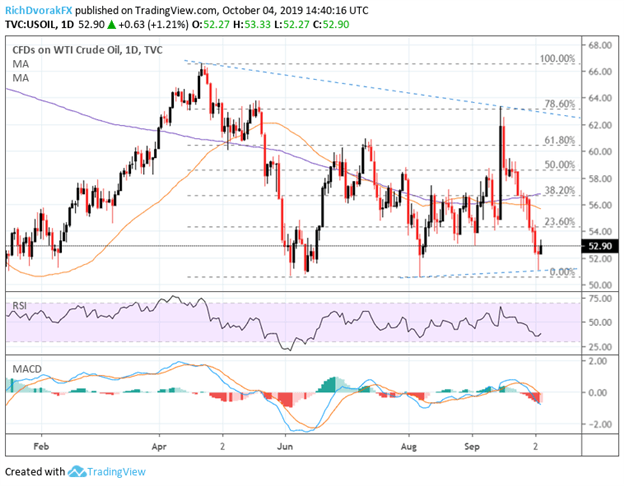 Turning to the daily chart, bearish crude oil price action subsided after the commodity touched confluent support at the 51.00 handle – a major technical level that has previously propelled the commodity back higher several times this year. From a bullish perspective, Thursday’s higher low relative to the August 7th swing low is a constructive technical development.

On a similar note, the RSI could be rebounding from deep “oversold” territory with the MACD pointing to fading selling pressure, which contrasts the longer-term weekly time frame. Although, support-turned-resistance around the 53.00 price level could prevent a sustained rebound. 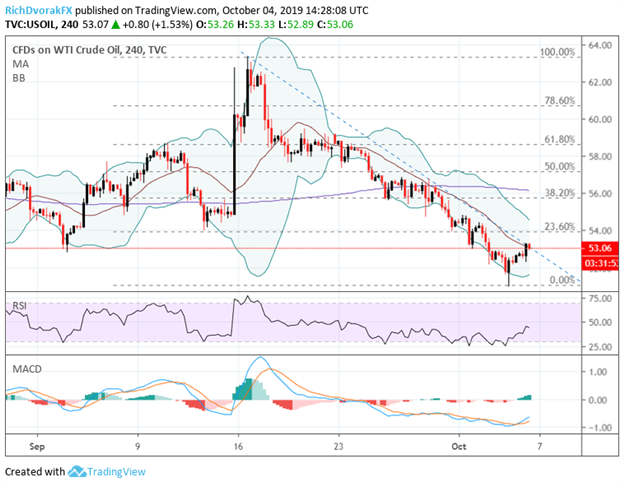 Zooming in on the 4-hour time frame, we see further evidence of crude oil’s short-term rebound under development. Topping the bearish trendline extended from the September 16 swing high could open the door to test the 54.00 handle, which is underscored by the 23.6% Fibonacci retracement of crude oil’s steep slide over the last 3 weeks.

The next level of technical resistance that could be eyed as another potential upside objective for crude oil price bulls brings the 56.00 handle into focus, which is highlighted by the commodity’s 38.2% Fib of the aforementioned bearish leg and 200-SMA. 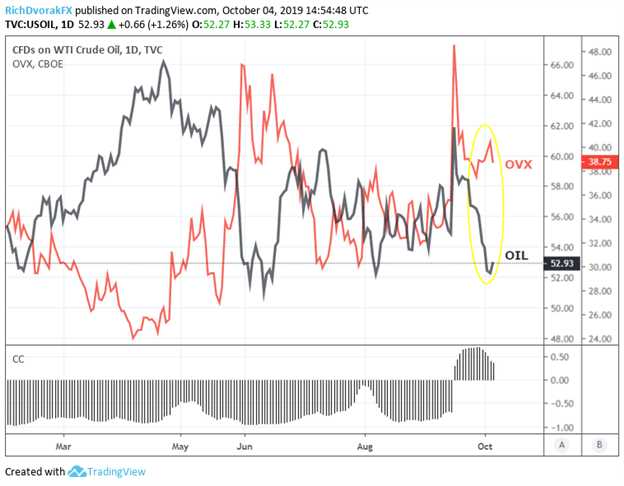 I noted in my most recent crude oil price technical forecast that expected oil price volatility – measured through the Cboe crude oil volatility index (OVX) – was turning back higher and reflected deteriorating risk appetite. I also noted that the typically inverse correlation between the two is presently positive, but appears to be drifting back to its typical relationship.

While the latter still seems to hold, OVX seems to be turning back lower as the weekend approaches, which could bolster risk appetite and crude oil prices in the days ahead. Nevertheless, markets will be forced to digest upcoming economic data releases that could further sway Fed rate cut expectations in addition to the latest US-China trade war headlines set to cross the wires with talks between the two economic powerhouses scheduled to resume next week.