Q2 2019 was an outstanding quarter for DKS, achieving the strongest quarterly comp sales gain since 2016. Key highlights of Q2 2019 earnings include, among others:

Our key strategies and investments are working, our major headwinds are behind us and we’ve bent the curve on sales. We are very enthusiastic about our business and are pleased to increase our full year sales and earnings outlook

Substantial long-term progress for the period 2009-2018

Compared to 2009, DKS has been firing on all cylinders:

During the fiscal period 2009-2018, Gross Profit, Net Income, EBITDA and diluted EPS all more than doubled (i.e. all up more than 100% or more than 12.5% annualized rate). Also, operating cash flow increased by almost 80% and the share count fell by ~16%. Note until 2013/2014 the Company was a net issuer of shares, as show in the graph below. Buybacks aggressively commenced in 2015 and, since then, the Company has been a buyback machine (more on this below). 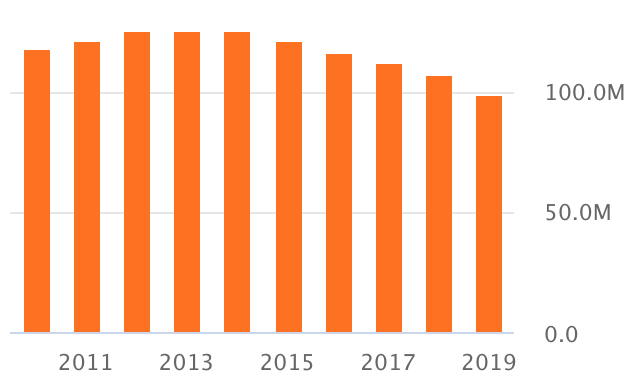 We established that over the period 2009-2018, DKS was firing on all cylinders, with rapid growth on all fronts. Zooming into the period 2014-2018, DKS arguably still made progress on most fronts, albeit at a slower pace, especially in terms of EPS growth, as illustrated in the highlighted sections below: 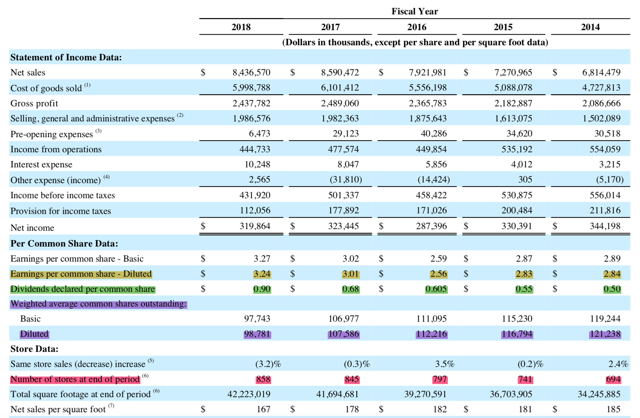 How do we explain the underperformance since 2014?

It mostly has to do with the rapid slowdown in EPS growth, greatly attributed to negative same-store sales in 2017 and 2018. In other words, even though the Company has been opening stores on a net basis as well as aggressively repurchasing shares, diluted EPS was up only ~14%, or ~3% per annum. To compensate for this slowdown, the Company has embarked upon an aggressive progressive dividend policy, growing the dividend substantially since 2014 (~80% increase). In other words, DKS has experienced substantial multiple contraction despite still growing EPS. Herein lies the opportunity.

Going forward, I expect significant increases in EPS, supported by same-store sales growth, on the back of the strongest quarterly comp sales gain since 2016, as well as continued aggressive share repurchases. Regarding buybacks, it is important to note that during Q2 2019, DKS repurchased ~4.5M common shares at an average cost of $35.52 per share, for a total consideration of ~$159.3M. In total, under the $1bn 5-year share repurchase program authorized in March 2016, DKS has repurchased $833M common shares and has approximately $167M remaining. What’s more, in June 2019, the Company authorized an additional 5-year share repurchase program of up to $1 bn. The Company plans to continue to purchase under the 2016 program until it is exhausted or expired, and then move on to the new program. To put things into perspective, DKS’s current market cap is ~3.7bn, versus the new buyback program of up to $1bn, in addition to the March 2016 program of $1bn which has almost been completed. That is substantial and long term investors stand to benefit.

If the Company delivers on accelerating EPS growth, the share price will eventually follow and we will finally experience multiple expansion. I built my position in the mid-$30s and may add more, depending marketing conditions (most likely during substantial dips). At the mid-point of FY 2019 diluted EPS guidance ($3.375) DKS is trading at less than 12 times multiple, which is cheap for a company poised for rapid EPS growth. Long DKS.

Disclosure: I am/we are long DKS. I wrote this article myself, and it expresses my own opinions. I am not receiving compensation for it (other than from Seeking Alpha). I have no business relationship with any company whose stock is mentioned in this article.