Endeavour Silver (EXK) experienced a pretty turbulent summer. Its share price was moving around the $1.8 level in early June. Later, it found strong support in the growing silver price, and the share price increased to $3. But in early September, silver price peaked at $19/toz and started declining to its current level of $17.5/toz. Endeavour Silver’s share price started declining as well. And after the Q3 production results, which were weaker than expected, it declined back to $2.

Q3 production results were announced on October 9. Although it was expected that H2 2019 production should be higher compared to H1 2019, Q3 results indicate that not everything is going as planned. Silver production experienced a major decline. While Endeavour produced more than 1.059 million toz silver in Q2, it produced only 948,547 toz silver in Q3. It means a 10.5% decline. The decline is much bigger when compared to Q3 2018. This huge difference is caused especially by the El Cubo mine that is nearing the end of its mine life. 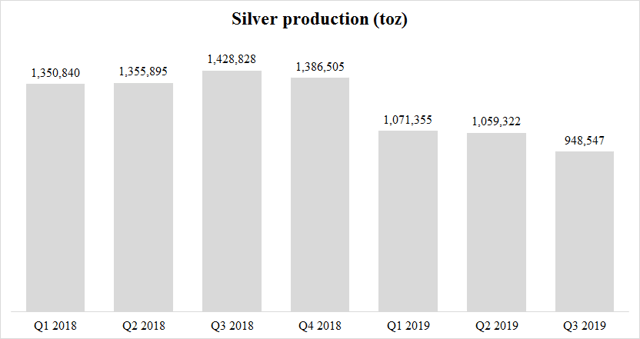 Gold production increased slightly, from 9,558 toz to 9,716 toz. It represents a 1.7% increase quarter-over-quarter. However, it is not enough to compensate for the huge decline in silver production. 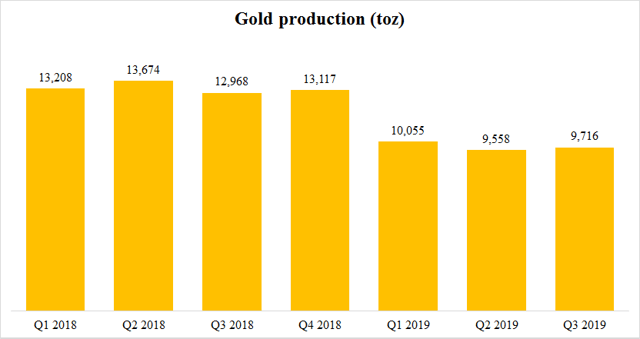 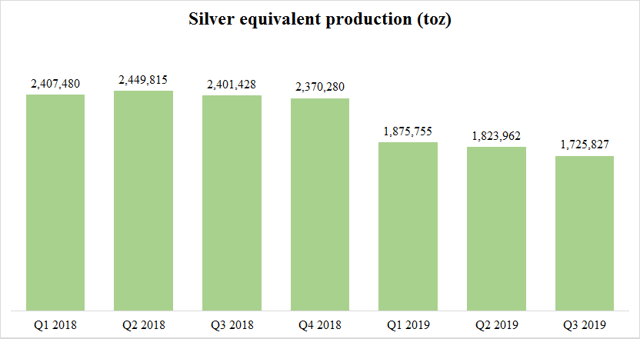 As can be seen in the chart below, the silver production decline is attributable especially to the El Cubo mine that produced 102,546 toz of silver less in Q3 than in Q2. The main issue was that the veins were narrower and ore dilution was higher than expected. As a result, the silver grades declined from 178 g/t silver to 128 g/t silver.

Although the Bolanitos mine still suffers due to the mine plan re-sequencing, it experienced a production decline of only 25,000 toz silver. This decline was nearly compensated by a significantly increased El Compas mine production. The Guanacevi mine silver production remained stable. 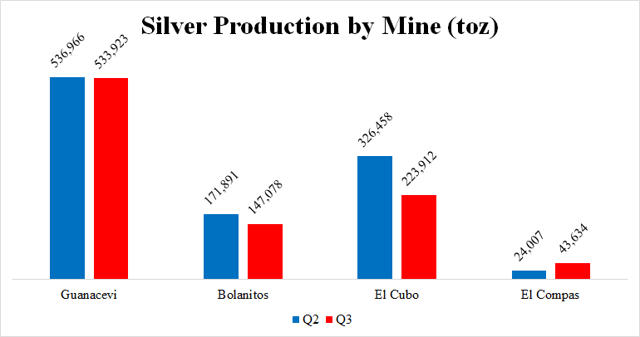 The good news is that things should improve in Q4. The situation should stabilize at El Cubo and El Compas and the volume of processed ore as well as the gold and silver grades should increase at Guanacevi and Bolanitos. According to Bradford Cooke, Endeavour Silver’s CEO:

Our production in the Third Quarter 2019 was down year-on-year but we are seeing positive traction from all the operational changes made in the past two quarters. We expect lower operating costs in Q3 and further improvements of Guanacevi and Bolanitos tonnes and grades in Q4, 2019 which should have a positive impact on costs and production.

Another negative news is that the Terronera project seems to be facing some delays. The final PFS was expected to be completed by the end of Q3. However, in the last news release, the company states:

We continued to advance our Terronera and Parral projects with engineering trade off studies during the quarter. The mining and processing of bulk samples from each project are planned this quarter in order to complete a final PFS for Terronera and an initial PEA for Parral.

It seems like the bulk samples will be mined and processed first. It will take some time, and it is possible that the PFS won’t be completed this quarter. Given that Terronera should become Endeavour’s new cornerstone asset, with an average annual production expected at 2.9 million toz silver and 28,000 toz gold (5.1 million toz of silver equivalent) at an AISC of only $1.36/toz silver or $8.35/toz of silver equivalent, the delay is not good news. 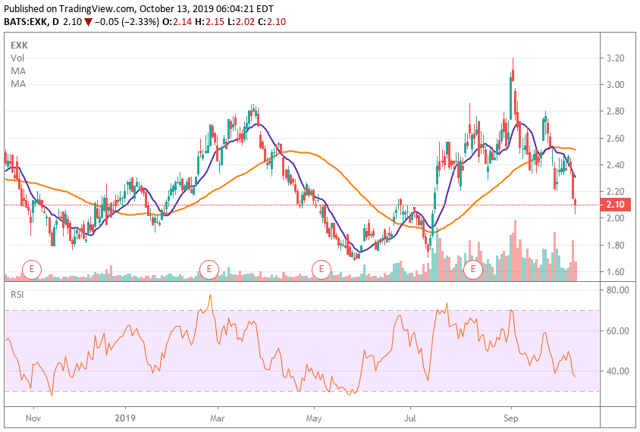 Endeavour Silver’s share price stands back at $2.1 right now. Back in my early July article, I concluded that the company is like a call option on silver, with good upside potential and limited downside risk, especially due to the Terronera project. Three months have passed and several things have changed. Some developments were positive and some of them were negative. A major positive is that the silver and gold prices moved notably higher. Although Endeavour Silver’s Q3 operating results were worse than expected, there is a good chance for the financial results to be better compared to Q2, due to higher metals prices.

On the other hand, production declined again, and it is hard to say whether Q4 will be good enough for Endeavour to meet the 2019 production guidance. Another negative is the delay of the Terronera project’s final PFS that may lead to delays in financing and subsequently also to delays in construction and production startup. Another negative is the current technical picture which indicates that the share price weakness should last in the near term. Probably at least until November 5, when Q3 financial results should be released.

I still like the upside potential of Endeavour Silver; however, in the near term, investors should be cautious. If the $2 level is broken, another major support is around $1.8. This should be a great price to initiate a new position in Endeavour Silver or to add to the old one.