For the Lipper fund-flows week ended Wednesday, October 9, 2019, equity funds and equity ETFs posted returns on the plus-side, returning 0.91% and 0.76%, respectively. However, both investment types witnessed net redemptions for the week, handing back some $3.9 billion (for their 34th consecutive week of net redemptions) and $175 million (third week in a row). Despite posting year-to-date average returns of 12.90% and 9.79%, respectively, they have witnessed net redemptions of $172.4 billion and net inflows of just $31.7 billion for the year thus far. Meanwhile, their taxable fixed income mutual fund and ETF counterparts took in $121.8 billion and $90.1 billion over the same period, returning 7.43% and 7.17%, respectively.

Nonetheless, market volatility caused by global growth uncertainties, trade disagreements, and other geopolitical concerns (Brexit, North Korea, Iran, and the like) have many investors sitting on the sidelines. Year to date, money market funds have been the largest attractor of U.S. investors’ money, taking in a net $365.8 billion, the largest sum of any of the four broad investment categories. One would have to go back to 2008 (+$687.8 billion) to find a full year that saw larger net inflows, and there are still a little more than two-and-a-half months left in 2019. As one might expect, the average money market fund return (+1.38%) year to date has been very low – lagging the inflation rate – but still protecting investors from the vagaries of the market and providing a slight yield. 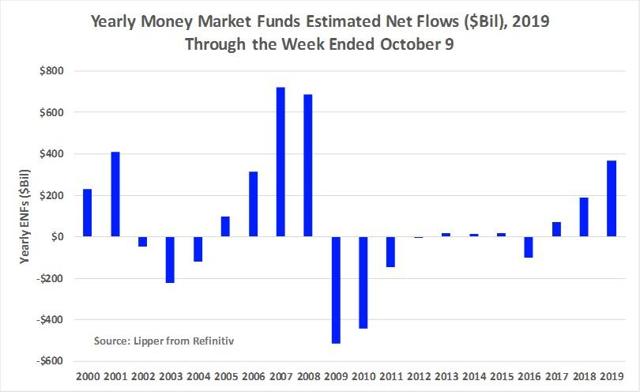 For the 40th consecutive week, municipal bonds funds (including ETFs) have attracted net new money – taking in $70.9 billion year to date – the largest net inflows for the year going back to 2009’s full-year net inflows of $81.1 billion. The average municipal bond fund returned 6.75% year to date. 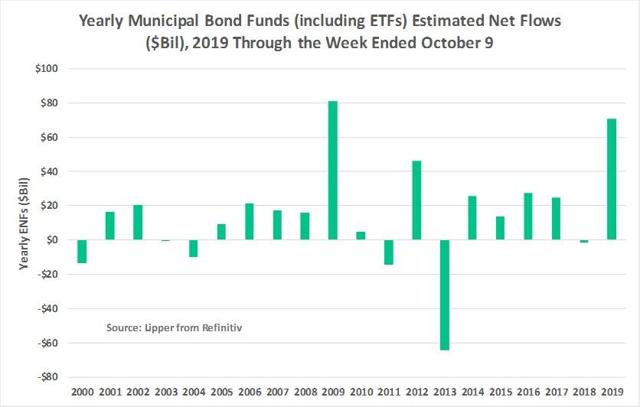