U.S. auto manufacturers have struggled over the last couple of years even though the economy has been doing well. Ford (F) saw its stock price fall from the $12 range to a low of $7.06 last December. The stock did rally back and recently hit a high of $10.40 before turning lower again. The company is set to release earnings before the open on October 23 and investors are hoping the company can deliver a positive surprise.

Ford has seen its earnings decline at a rate of 14% per year over the last three years. Earnings are expected to decline by 3% for 2019 as a whole and earnings were up 4% in the second quarter. For the third quarter, the consensus estimate is for EPS of $0.26. The company earned $0.29 in the third quarter of 2018, meaning expectations are for a decline of 10.3% on a year-over-year basis.

Revenue is expected to decline by 1.6% for the quarter and by 1.9% for the year. Revenue was down marginally in the second quarter. Over the last three years, revenue has increased at a rate of 2% per year.

Ford’s management efficiency measurements are mixed. The return on equity is average at 14.5% while the profit margin is below average at 3.6%. The operating margin is only 2.43%.

The Stock Has Several Potential Layers Of Resistance Looming

Looking at the weekly chart, we see the different cycles I mentioned early on. The stock hit a peak in early 2018 and has been trending lower since. There have been different cycles within the overall downward trend with pretty sizable moves in both directions.

The weekly stochastic readings hit oversold territory in August and then moved up slightly before falling back down again. The indicators made a bullish crossover last week and look to be heading higher again.

My biggest concern for Ford is the different layers of potential resistance. We see the $9.50 area acted as support back in 2016, again in 2017, and once again in early 2018. The stock moved below that level in mid-2018 and then attempted to move back above it several times in the second half of the year. The big rally in the first half of this year moved the stock back above that level, but the rally in September stalled in that area.

In addition to that potential resistance layer, there is the downward sloped trend line that is currently in the $10-$10.25 range.

If we move to a monthly chart, the trend line looks to be more of an upper rail for a downward-sloped trend channel. 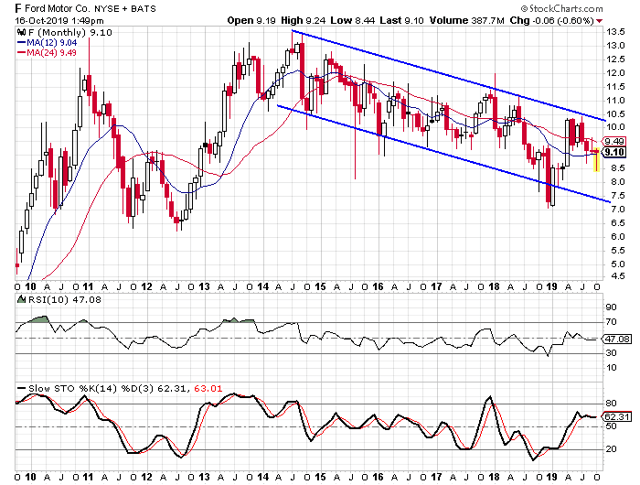 The monthly overbought/oversold indicators are in the middle of their ranges and don’t really give us much aid in determining the stock’s direction. I did take note of how the stochastic readings were in overbought territory in late 2017 before the stock rolled over and they were in oversold territory at the end of 2018 before the big rally.

Sentiment Toward Ford Is Leaning To The Pessimistic Side

The sentiment indicators for Ford are mostly pointed toward the pessimistic side, but given how the stock and company have been performing that is to be expected. There are 18 analysts covering the stock at this time with seven “buy” ratings, 10 “hold” ratings, and one “sell” rating. This puts the buy percentage at 38.9% and that is well below the average buy percentage in the 65% to 75% range. 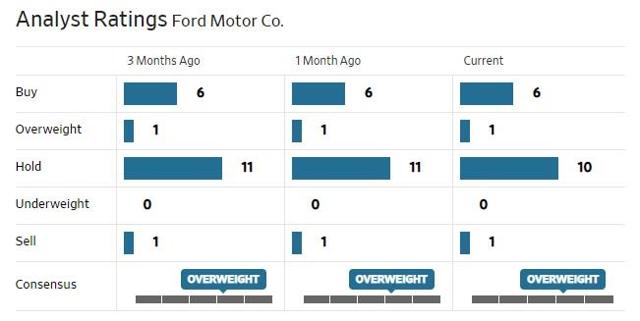 The short interest ratio is at 3.5 currently and that is slightly above average. The number of shares sold short went up in the second half of September, jumping from 125.4 million shares to 128.1 million shares. This suggests that the bearish sentiment is increasing as we head toward the earnings report.

The put/call ratio is at 1.01 presently with 665,606 puts open at this time and 657,269 calls open. This falls in the average range compared to other stocks and it is down a smidge from the 1.06 reading on July 24 when the company reported second quarter earnings.

My Overall Take On Ford

Evaluating Ford as an investment really depends on your investment objectives, risk tolerance, and patience. If you are seeking income from your investments, the 6.6% yield the stock offers is certainly enticing, but that is assuming the company can keep the dividend where it is currently or increasing it slightly.

If your main objective is capital appreciation, I don’t think Ford is a very good investment at this time. The fact that the company has seen its earnings and sales decline as the economy has been expanding is concerning. What happens if the global economy starts to contract? Then there is all the technical resistance that isn’t too far above the current stock price.

Ford’s P/E ratio is at 16.45 which isn’t terrible, but the forward P/E is at 6.62 currently and that has to be attractive to value investors. If you have the patience and ability to wait, the stock could generate a decent return in the next five to six years, but I think there are better opportunities out there.

Personally, I am not a fan of Ford. My main investment objective is capital appreciation and I am not a very patient investor. As I expressed before, the fact that the company is seeing earnings and revenues decline as the global economy has been expanding is a major concern. If the global economy goes into a recession in the next few years as many are predicting, Ford has very little chance of growing earnings and revenue.

The earnings report itself looks like a coin toss to me – the stock could gap higher just as easily as it could gap lower, but the upside appears to be more limited by the layers of resistance the stock will have to fight through. The downside support is 20% to 30% below the current stock price, but the first resistance level is only 4.4% above the current price and the second resistance point is only 12.6% above the current price. That is not a scenario I want to get involved in given my investing style.

If you would like to learn more about protecting and growing your portfolio in all market environments, please consider joining The Hedged Alpha Strategy.

One new intermediate to long-term stock or ETF recommendation per week.

One or two option recommendations per month.

A weekly update with my views on the market, events to keep an eye on, and updates on active recommendations.