Indicatively, the U.S. oil rig count continued to decline in the last week by three in the week to Oct. 4, bringing the total count down to 710, the lowest since May 2017. Reuters noted:

The oil rig count, an early indicator of future output, has declined over a record 10 months as independent exploration and production companies cut spending on new drilling as they focus more on earnings growth instead of increased output.

In other words, Domestic Production may have peaked, at least for now.

The following graph presents the Crude Oil Input to Refineries in the last year:

As I have pointed out in previous articles throughout 2019, this figure has been declining year-over-year for some time, and no one seems to be able to explain the reasons while expecting it to turn up.

One reason could be that the U.S. gasoline consumption is accelerating downward, as Mason Hamilton, the U.S. EIA Senior Petroleum Markets Analyst, illustrates: 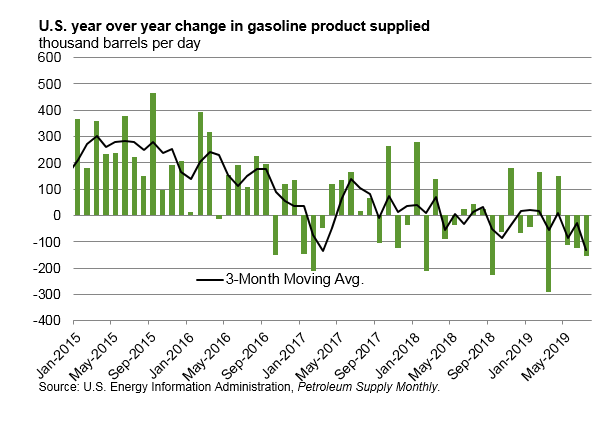 The consistency of the downward trend of the three-month moving average is striking, and for those who believe that this is due to the slowing domestic GDP growth, the following graph presents the U.S. GDP growth since 2014:

The U.S. Real GDP Growth rate has been relatively consistent in recent years with only small variations around the 2 percent level, so an imaginary slow down in the domestic growth rate is not the explanation for declining gasoline demand in the United States.

Further, the U.S. Monthly Total Vehicle Miles Traveled have been increasing, so the reason is not that Americans are driving less either:

What really is causing the accelerating decline in domestic gasoline demand?

The above discussion leaves one possible answer: Electric vehicles.

I estimate that electric vehicles could be more than offsetting gasoline demand increase from the growing U.S. vehicle fleet, and therefore, explain the 100,000 to 150,000 barrels per day year-over-year declines in domestic demand for gasoline. I expect this trend to grow in 2020 and beyond.

Energy investors should not underestimate the impact of growing electric vehicle sales on gasoline demand, especially in advanced economies.

If you’re interested in my investment methodology and other holdings, join Value Portfolio. I’m confident that you will find my fundamental research to be insightful, and I look forward to discussing ideas with you.