GBPUSD remains near its best levels of the day, despite worse-than-expected UK employment data. The standout figure was the employment change 3m/3m release which showed a 56k contraction compared to expectations of a 23k increase and a prior release of 31k. Average earnings-ex bonus of 3.8% were a touch better than expected while average earnings including bonus were slightly lower at 3.8% compared to expectations of 4.0%.

Sterling is getting a decent nudge higher today after EU negotiator Michel Barnier said that a new deal is possible this week and that he is currently involved in ‘intense’ discussions with the UK. Barnier added that it is ‘high time to turn good intentions into a legal text’ ahead of the European Council meeting on October 17-18, adding to growing belief that recent tunnel discussions between the UK and EU may well have borne fruit. Even if a deal is agreed between the two parties, it will still need to be voted through in Parliament on Saturday. This may well prove to be difficult as UK PM Boris Johnson does not command a majority in the House, and he will need the DUP and Labour Brexiteer votes if he is to have any chance of passing the new bill.

GBPUSD is trading around the 50% Fibonacci retracement level at 1.2670 and is eyeing the 1.2708 multi-month high made last Friday with a view to pushing higher. The pair trade above the 200-day moving average – just – and a close above this long-term indicator would give GBPUSD a further bullish push. The next upside target is 1.2784 to 1.2815. The first level of support is made up from a cluster of highs and lows around 1.2582 before stronger support is seen around 1.2500. 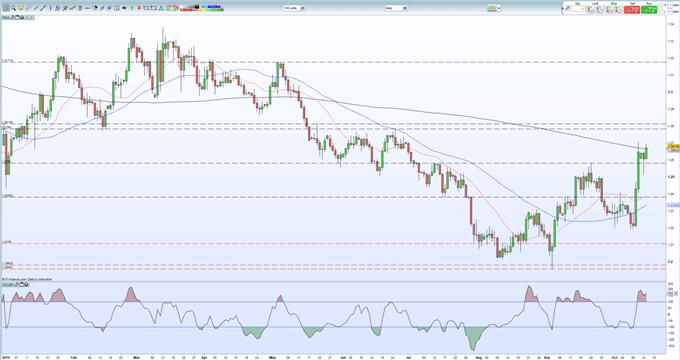 IG Client Sentiment shows that retail traders are 57% net-long GBP/USD, giving us a bearish contrarian bias. However, recent daily and weekly positional changes give us a mixed outlook.

Traders may be interested in two of our trading guides – Traits of Successful Traders and Top Trading Lessons – while technical analysts are likely to be interested in our latest Elliott Wave Guide.

What is your view on Sterling and Brexit – bullish or bearish?? You can let us know via the form at the end of this piece or you can contact the author at nicholas.cawley@ig.comor via Twitter @nickcawley1.