Heritage Commerce Corp. (HTBK), the bank holding company for San Francisco business bank Heritage Commerce Bank, closed the stock acquisition of Presidio Bank (OTCPK:PDOB), formerly a public company on Oct. 11, 2019. I estimate HTBK stock is cheap on a synergy adjusted and run-rate based analysis. At 11-12x earnings, with a 4.2% dividend yield and 1.7x adjusted tangible book value, HTBK stock is worth 32% more, at $15.17 per share. Subscribers to my new Total Yield Value Guide have access to my spreadsheet model on HTBK stock.

This is the fourth acquisition by Heritage Bank in the past several years.

Going forward, there are very few business banks for it to acquire in the Bay area. It’s not clear if they will continue doing acquisitions. In 2018, Heritage bought United American Bank and Tri-Valley Bank – two banks in one quarter. In 2014, Heritage bought Bay View Funding, a factoring company.

Presidio Bank, formerly a public company, was paid for using Heritage Commerce Corp. stock. The ratio used was 2.47 Heritage shares for every Presidio share outstanding. I estimate that there were 6.331 million PDOB shares outstanding. So, that means Heritage issued 15.638 million shares to acquire Presidio.

The table above shows that HTBK shareholders will control 74% of the company.

So, at today’s Heritage price of $11.52 per share, the acquisition cost $180.1 million. Now, Presidio earned $2.7 million in its latest quarter, Q2 2019. But that included $726K in acquisition-related costs. So, on a run-rate basis, after adjusting for acquisition costs, Heritage paid $180 million for earnings of $12.9 million after-tax or about 14x adjusted earnings.

Presidio reported tangible book value of $96 million in Q2. So, the $180 million acquisition price was 1.88x tangible book value. These are reasonable prices given Presidio’s 4.61% net income margin and its 14.3 return on tangible equity going forward. 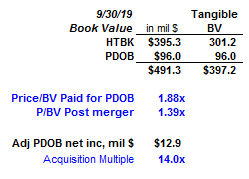 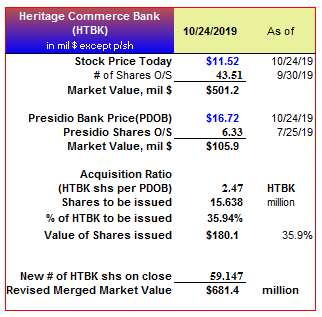 Ben Graham taught in his book The Intelligent Investor a favorite book of Warren Buffett, that you should always try to determine the earnings power of a company. With the Presidio acquisition, we can do this for Heritage Commerce Corp. To do this, we combine the two companies’ earnings, add-back adjustments, and then account for the synergies that the company has identified.

These tables above show that the combined company will have a stated combined net income of $55.93 million. However, that does not include the merger-related costs that both companies have spent. By adding back those costs, and deducting taxes, we can estimate the pre-synergy earnings power of HTBK:

This shows that there are almost $2 million in merger-related costs that both companies identified in their latest financial statements (i.e. Q3 for HTBK, and Q2 for PDOB).

Next, we add these back to the combined earnings after tax: 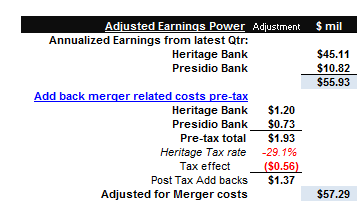 This shows that the adjusted add-backs were $1.37 million. This brings the total combined net income earnings power of the two companies to $57.3 million.

Next, we add back the synergies.

The combined company will now have 17 offices throughout the Bay area. 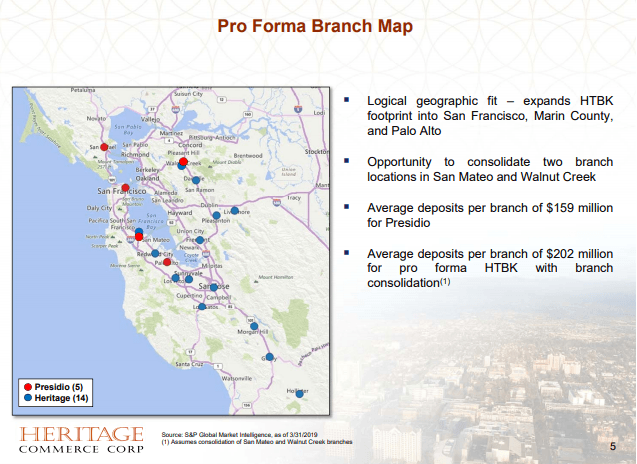 This picture shows that the combined company will eliminate 2 branch offices.

More importantly, the combined bank will have higher earnings, after shedding acquisition-related costs and accruing at least $12.1 million in earnings synergies. 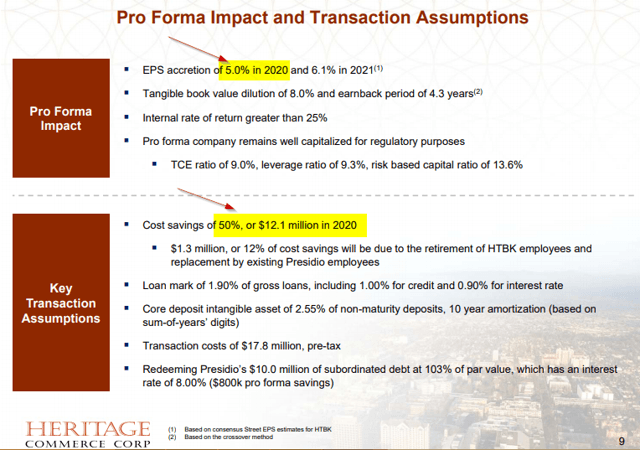 As a result, the combined company will have $12.1 million more in pre-tax income. Here are the after-tax synergies: 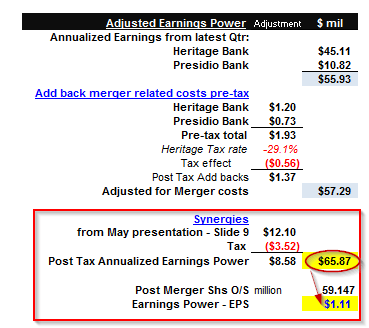 This shows that the extra $12.1 million in synergies will translate into $8.6 million in post-tax earnings. That brings the total earnings power of the combined companies to $66 million or $1.11 per share.

This is significantly higher than Heritage’s most recent reported earnings. HTBK reported its Q3 earnings as $11.3 million or $0.26 per share. So annualized that is $45.2 million or $1.04 per share.

So, the new earnings power of the company will be 45.7% higher and on a per-share basis will be 6.7% higher. Obviously, by issuing shares to complete the merger, the per-share synergies are lower.

I talked to Mr. Larry McGovern, CFO of Heritage Commerce Bank, on the phone. I asked him about the slide (number 9 – see above) which shows there will be $12.1 million in synergies. He said that these synergies would come from a combination of reduced branch costs, both in terms of leases and personnel, plus a reduction in force at Presidio. Also, he indicated that it would take until the end of the second quarter of next year before all the synergies would begin to take effect.

So, I would expect the higher earnings power of the company to begin to slowly show up in early 2020. On a combined basis, the earnings power P/E will be as low as 10.3x:

Dividends Estimate of the Combined Company

The good news is that the combined company will have plenty of money to pay its generous dividend of $0.12 per quarter. This presently gives HTBK stock a 4.2% dividend yield. I estimate that EPS will be between $1.03 and $1.11 per share on a run-rate going-forward basis.

This shows that after adding in one year of earning power and deducting a dividend cost @ $0.14 per quarter at the higher number of shares outstanding after the merger. It also assumes a 2.0x price-to-tangible book value for the revised $7.27 per share tangible book value. The resulting valuation at $14.54 is 26% higher than today’s price.

Another way to value HTBK would be to take the average of a number of small bank stock P/E ratios. Below is a list of over 240 regional banks’ P/E ratios 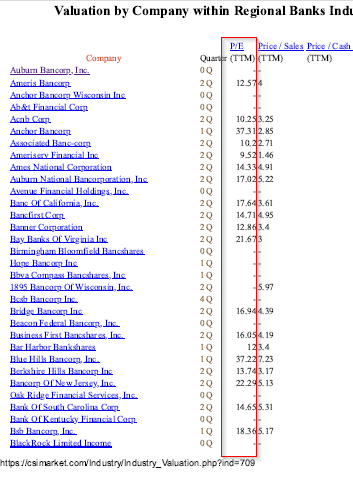 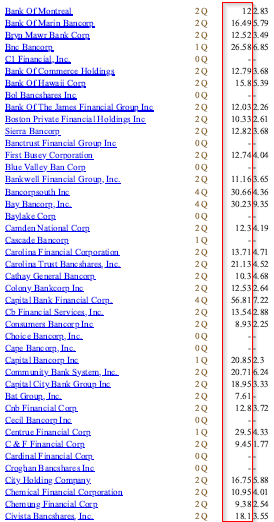 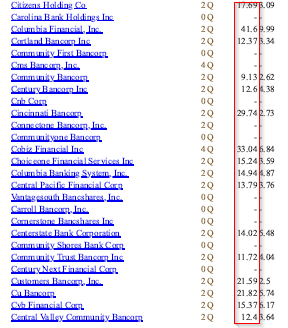 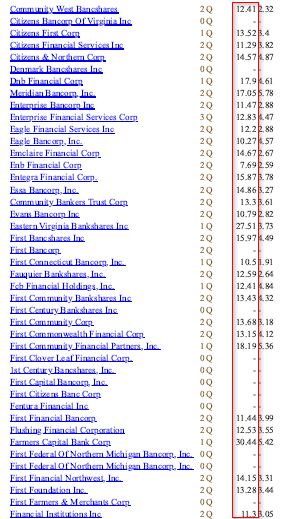 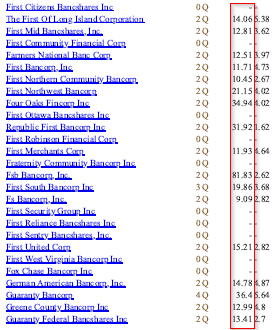 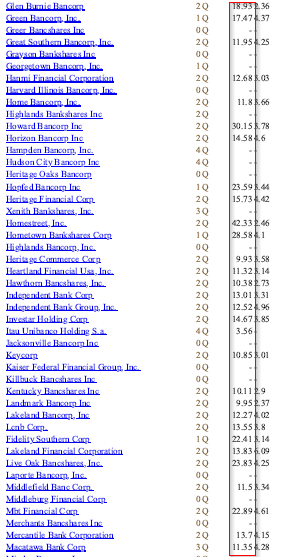 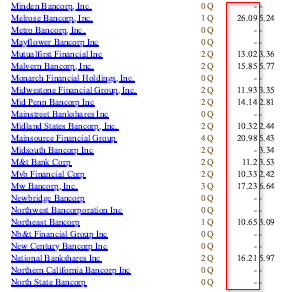 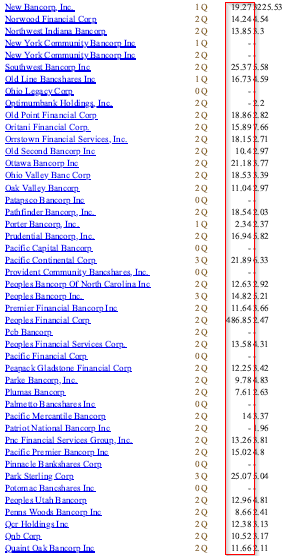 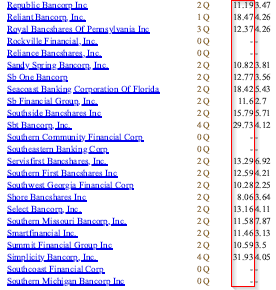 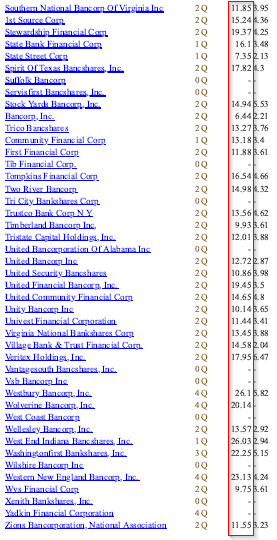 After some work, I calculated the averages of the P/E ratios for this list:

So, the average of these three valuations metrics for HTBK is as follows:

I have shown that the acquisition of Presidio Bank, previously listed as PDOB, will be quite accretive to Heritage Commerce Corp. HTBK is a business based bank in the San Francisco Bay area which has been growing through acquisitions. I estimate the combined companies’ earnings power to be $1.11 per share. Using three different measures of value, I estimate HTBK stock is worth $15.17 per share or over 31% higher than today.

In addition, it is possible the dividend could increase as a result of this merger. All in all, expect good things to accrue to shareholders of this fast-growing bank.

Subscribers receive exclusive articles, model spreadsheets on stocks published both here and on other sites, access to my historical articles and a chat room.