Intel (INTC) is expected to perform quite well in 2019, and the market estimates it will be performing better than average in the following years.

Investing in the company presents a secure risk-reward proposition with quite a low downside and quite favorable upside potential. As for its price, it is reasonably priced with small dividends.

While its market dominance might be over, the company will shine again, and soon might be the time to get in.

Intel and the end of Moore’s Law

Intel has lost its position as the market leader and admits it could take up to 2021 to catch up with AMD (AMD), but someday it will catch up. Fortunately for Intel, the market cycle is long, and it should limit the market share that Intel can lose.

Authors, like Kwan-Chen Ma, point out that even Lisa Su (AMD’s CEO) admits that it will take generations to take the data servers market share away from Intel.

Moore’s Law will be over soon, and the market will shift from racing to shrink transistor size to shrink the price of the final products. Here intel has an edge. By having its factories, Intel will be able to maintain a high gross margin even if it drops its price.

As the valuation below will show, at a very reasonable price and with a reliable business, investing in Intel might provide an excellent opportunity to get a blue-chip company at a reasonable price.

These approximations are in line with the market expectations for Intel in the next couple of years, as the image below shows.

I like to use Peter Lynch’s ratio when valuing a stock. This method uses the ratio between the expected earnings growth plus dividends and the P/E of the stock to determine its fair value. A stock that has a 1:1 ratio is reasonably priced. The higher the number, the more underpriced the stock is.

The risk profile shows there is a 54.84% probability that Intel will trade at a lower price than it is today. Considering the potential downside, upside and the likelihood of each, the statistical value of the opportunity of investing now is -0.9%.

The risk profile shows there is an 8.57% probability that Intel will ever trade at a lower price than it is today. Considering the potential downside, upside, and the likelihood of each, the statistical value of the opportunity of investing now is 7.2%.

When we add to the estimate the dividends that Intel will give the next few years, the proposition becomes more attractive. 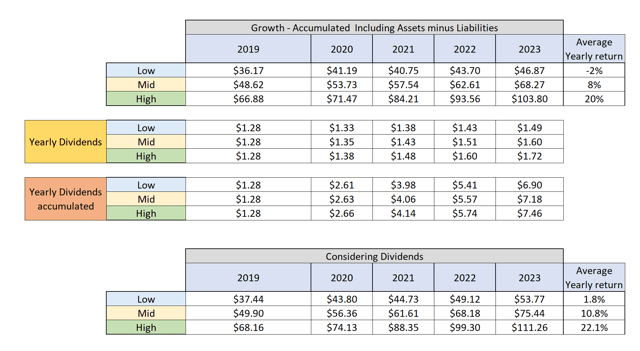 The average annual expected return for Intel is 10.8%. A performance of this magnitude is significant, especially considering the small downside potential that the stock gives.

Given the satisfying growth in revenue that the company has shown in the past, the quite solid financials, and the low level of debt that the company has, it might be a good time to get a good and safe position at a reasonable price. It might not be a record-breaking performer, but it has solid chances of overperforming the market for the foreseeable future.

Intel’s recent issues might be clouding its future, and while a winner takes it all story might be more epic, the most likely scenario is that both AMD and Intel will have a sizable portion of the market in the future. The current price of Intel already reflects part of AMD’s expected market share gain, which puts its value close to the fair price. At this time, betting on both horses might be the wisest strategy.

The processor’s market is considered a zero-sum game, but investing in the stock market does not necessarily play out that way. While it is logical that if Intel loses CPU market share, other companies will grab it, both companies might grow in price. Intel’s price is quite compelling, and it might be a good time for new investors to get in or for investors of other companies to hedge their bets.

If there is anything in this article, you agree or disagree with or would like me to expand further on; I would sincerely appreciate you leaving a comment. I will address it as soon as possible.

Disclosure: I am/we are long AMD. I wrote this article myself, and it expresses my own opinions. I am not receiving compensation for it (other than from Seeking Alpha). I have no business relationship with any company whose stock is mentioned in this article.