Lundin Mining (OTCPK:LUNMF) remains one of the better managed base metal companies as it’s heavily focusing on free cash flow while maintaining a strong balance sheet. The net cash position is subsequently often used to make opportunistic acquisitions when other companies need to sell off assets. And that’s what Lundin did in July as well. It used the $600M+ net cash position to purchase a low-cost mine from Yamana Gold.

Lundin Mining’s OTC listing is relatively liquid (it’s not great, but doable for retail investors), but you also have the option to trade in the company’s shares through the facilities of the Toronto Stock Exchange, where Lundin Mining is trading with LUN as its ticker symbol. The average daily volume in Toronto is 2 million shares. Lundin Mining reports its financial results in US Dollar, and I will use that currency throughout this article.

Lundin Mining’s focus is on the base metals with copper, zinc and nickel as its main products. There’s also a decent amount of precious metals production, but those are generally accounted for as a by-product credit to the operating expenses for the base metals. 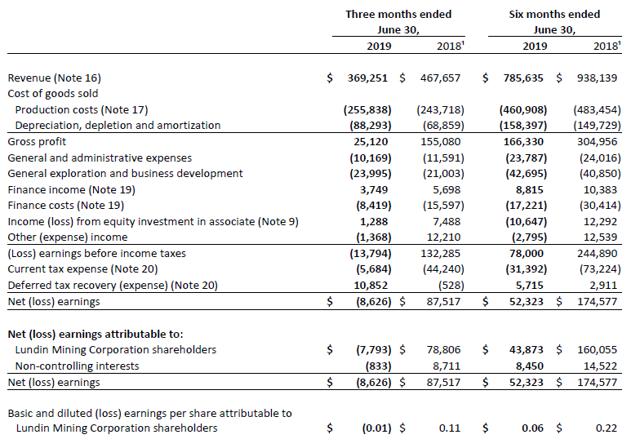 The total revenue in the first half of the year was $786M, a substantial decrease compared to the $938M in H1 2018 due to the lower metal prices. Unfortunately the production expenses are relatively ‘fixed’, and that’s why the gross profit decreased by 45% to $166M. And not only the production expenses are relatively fixed, so are the normal overhead expenses, causing the pre-tax income to drop from almost $245M to $78M resulting in an attributable net income of $52M or $0.06/share.

Normally one would expect the free cash flow result to be much better, but unfortunately that’s not the case at Lundin Mining.

The operating cash flow was a very acceptable $267M, but this includes a $67M contribution from working capital and inventory changes, and excludes the $2.4M interest expenses. On an adjusted basis, the operating cash flow drops to $198M, which isn’t even close to covering the $361M in capital expenditures. 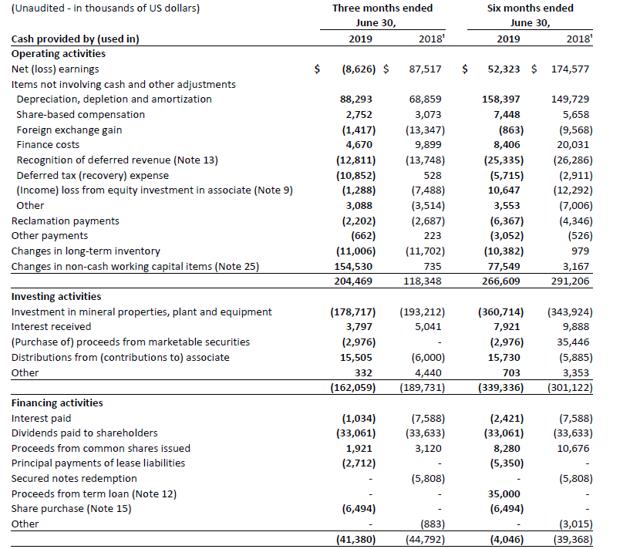 For the entire financial year, Lundin is expecting a total capex bill of $670M (pre-Chapada, see later), of which $170M is considered expansion capex. And based on the H1 performance, Lundin’s operating cash flow wouldn’t even be sufficient to cover the $500M in sustaining capital expenditures, which are quite a bit higher than the $300M in depreciation expenses that could be expected for the entire financial year.

Fortunately the balance sheet remained strong with in excess of $700M in cash and virtually no debt, and that allowed Lundin Mining to purchase a cash flowing asset.

The purchase of the Chapada mine should be easy to digest

After the end of the first semester, Lundin Mining announced it acquired the Chapada copper-gold mine from Yamana Gold (AUY) for $800M in cash. A good move for both parties as Yamana Gold finally gets a decent amount of cash inflow which will help it to restructure its balance sheet, while Lundin Mining will increase its annual copper production by around 120-130 million pounds and around 100,000 ounces of gold. Thanks to the gold as a by-product credit, the anticipated C1 cash cost will be just $1.10 per pound of copper.

Considering the H2 capex and capitalized exploration guidance totals $29M, it looks like the AISC production cost at Chapada will be around $2-2.10 per pound. This means that – should the sustaining capex indeed be $50M per year (it could be less than that in the next few years) – the Chapada mine will generate approximately $65M in free cash flow this year (on a pre-tax basis), but at $3 copper, the amount of pre-tax free cash flow increases to $120-130M per year, making an $800M price tag a bargain considering the mine life of the mine is expected to be 27 years. The resource will be updated later this quarter, and it will be interesting to see if Lundin Mining uses a different approach (and revises the mine plan) compared to Yamana Gold.

The $800M was paid by a mix of cash on hand as well as a $285M drawdown from the credit facility. The credit facility was recently upsized from $550M to $800M with an additional $200M accordion option. Not only was the credit facility upsized, it was also extended by 10 months while the borrowing costs were reduced by 0.125-0.25%. The cost of debt now ranges between LIBOR+1.75%/2.75% depending on the leverage, and that’s a cheap deal for a mining company.

A good deal, but let’s keep in mind Yamana Gold could be entitled to additional payouts to the tune of $225M depending on the gold price development and the construction of a pyrite roaster.

Even after completing the $800M purchase from Yamana Gold, I still expect Lundin Mining to have a marginally net debt position as the pre-acquisition cash buffer was very strong. Of course, the balance sheet still contains sizeable non-debt liabilities (with a net amount of $304M in deferred tax liabilities and $315M in reclamation provisions) but those elements are still much further down the road.

The problem Lundin Mining is facing is the lack of free cash flow. The expected production cost at Candelaria and Neves Corvo of $1.60-1.70 per pound of copper appears to be good, but once you add in the planned $440M in sustaining capex (boosted by the $130M capitalized stripping expenses at Candelaria), the all-in sustaining cost will increase by $1.05/pound which means that at the current copper price of $2.60 per pound Lundin will be able to cover all the operating and capital expenses, but won’t generate a positive free cash flow.

The 170 million pounds of zinc are being produced at a total cost of around $0.40/pound, but the $70M in operating expenses will have to be divided by the 145M payable pounds (increasing the production cost per payable pound to $0.47). The expected sustaining capex at Zinkgruvan will be $45M which will slap on an additional 31 cents to the production cost. This means the AISC per payable pound of zinc will be close to $0.80, and almost double the C1 cost per produced pound.

The Eagle nickel mine may actually save the day. The 27 million pounds will be produced at $2.60, but of the 27 million, only 20 million pounds in the concentrate will be payable, boosting the C1 cost per payable pound to $3.50. Most companies deduct the payable discount from the revenue (Lundin reported a nickel revenue of $48M from the sale of 12 million payable pounds, resulting in a sales price of $4/pound), but it’s easier to prove my point to show it as an expense, to show the market price needed by Lundin to break even. Fortunately the sustaining capex of $15M will result in an AISC of $4.25 per pound so Eagle should remain very profitable, but the cash flow will be reinvested into the project as Lundin Mining is planning a $30M expansion program.

Conclusion: Chapada and Eagle Nickel will generate a positive cash flow, but the other mines will be breaking even at best. Lundin remains a call option on the copper price as every 10 cents change in the copper price will have an impact of in excess of $40M on the cash flows.

Take advantage of the TWO WEEK FREE TRIAL PERIOD and kick the tires!