Netflix Shares Soar After Earnings Despite Tepid Subscriber Growth, but Will the Gains Last?

Netflix shares climbed 10% higher on Wednesday after the company revealed it surpassed analyst expectations in the most recent quarter. The company generated $5.42 billion in revenue, translating to $1.47 earnings per share, compared to the expected $5.25 billion and $1.05 EPS. Alongside financials, Netflix revealed it failed to meet subscriber growth expectations, adding only 6.7 million versus the 6.8 million that Wall Street analysts were looking for.

While strong revenue and earnings per share are encouraging, slowing subscriber growth is becoming a worrisome trend for Netflix as it fails to attract new users ahead of increased competition from Disney (DIS) and Apple (AAPL). Nevertheless, price action suggests the results were significantly better than many traders were expecting as shares traded to the top of the stock’s implied price range.

Recent weeks have seen Netflix, once the fastest growing stock on the Nasdaq, fall behind its more developed peers and direct competition. After Wednesday’s earnings reaction, the stock boasts a return of 17% in the year-to-date, compared to a 20% return for Disney, 48% return for Apple and 15% for Amazon (AMZN) but the stock’s reaction will have to be solidified before the drought is deemed over for Netflix and that may be difficult given the gritty details of the quarterly report. 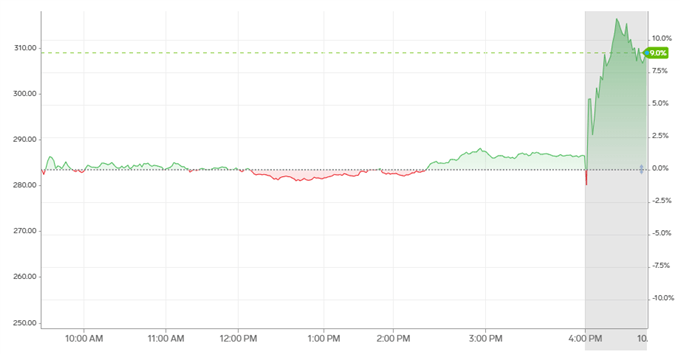 Although Netflix met third quarter expectations, by some metrics, the outlook for the future is concerning. Fourth quarter subscription growth is slated at 7.6 million additions, versus the 9.3 million expected by Wall Street analysts and the company continues to burn cash at an alarming rate. Therefore, while the initial reaction was overwhelmingly bullish, the stock could soon come back down to Earth as traders sift through the results and the market is opened to the rest of the public on Thursday morning.