OK, I was clearly early on this name when I wrote my first article on it a few years ago. I thought a low order book with declining deliveries combined with increased gasoline refining capacity in the middle east alone would skew the supply/demand imbalance in STNG‘s favor. In my defense, I don’t think that thesis was a ridiculous one particularly in light of STNG management’s confidence in the prospect of day rates at the time.

“I mean, our confidence level of this market getting much stronger than where it is right now in a one-year period is very high. We have a 75% probability as we cross one week plus or minus of Thanksgiving. It goes up to the 95% region once we get one year forward, simply because of the export capacity that is coming on, combined with the complete deceleration of new-building orderings and the aging of the fleet.”

One consistent knock on Bugbee among investors is that he can be promotional. Clearly, he was wrong about the turn in rates. It did not happen by Thanksgiving 2016 or Thanksgiving 2017 or 2018. Perhaps most frustrating to investors, there was never a clear answer as to why day rates were awful through 2018. OPEC production cuts, stubbornly high gasoline inventories world wide and longer than expected use of older ships were cited as reasons.

As a result, STNG found itself having to pull every lever in the book including raising equity at terrible levels (which mgmt participated in) to maintain liquidity. These offerings helped crush the stock as much as the low day rates. A 10:1 reverse split was another ugly feature of the stock getting crushed.

Whatever the reasons for low day rates, two things remained true that kept time on STNG’s side. First, the longer we went with low order books, the higher the probability the worldwide fleet growth would shrink from age.

Second, every day closer to January 2020 meant a day closer to a MASSIVE dislocation that rarely shocks an industry. For those that do not know shipping, that dislocation is implementation of new IMO (International Maritime Organization) rules requiring ships to reduce sulfur content of their fuel from 3.5% to 0.5%. This rule will require ships either install scrubbers in their ships if they want to continue burning bunker fuel aka HFSO (high sulfur fuel oil) or switch to diesel, which currently costs ~$3/gallon versus about $1.10/gallon in the US.

Owners of older ships will have to decide whether they want to incur the cost of installing scrubbers of ships near the end of their useful lives or run diesel. Scrap steel prices are relatively high, so they have a somewhat attractive option there.

If fewer owners make the investment that shrinks the fleet or means higher day rates. Either way, a company with a young fleet of modern eco design ships that have scrubbers stands to benefit. That company is STNG, whose time might finally be here. Day rates are already better this year and could inflect meaningfully higher. 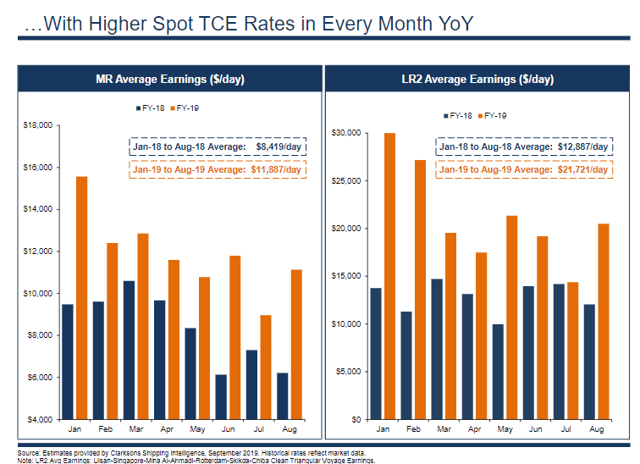 IMO 2020 will reverberate throughout shipping for a number of reasons that should impact supply and demand in product shipping’s favor.

As mentioned above, there is an unusual perfect storm hitting shipping with STNG positioned very well to take advantage of it.

1. 90% of STNG’s fleet have scrubbers. The rest will be over the next few quarters. It can run scrubber equipped ships with diesel/marine gasoil (MGO) or bunker fuel, taking advantage of any price discrepancies. They are also ECO-design boats, making them more fuel efficient to start with. 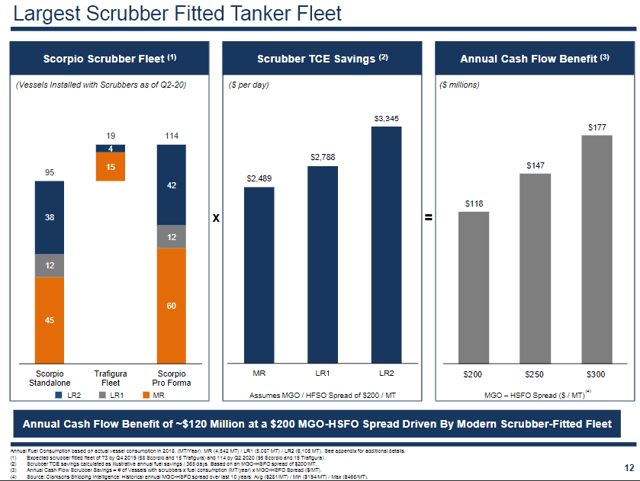 2. STNG’s fleet is young, much younger than the world wide fleet. Much of the worldwide fleet will age out of the next 5 years. None of STNG’s fleet will. They are far past their investment period and their boats should require minimal maintenance spend. They can generate enormous cash flow. 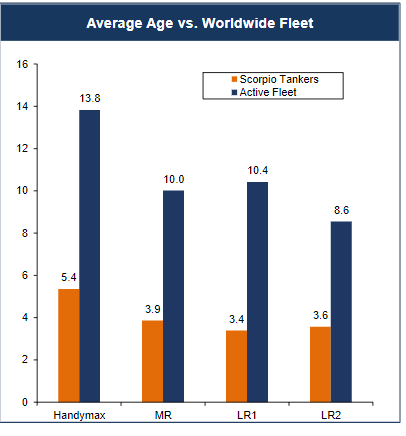 3. Even if rates spike very hard and order books all of the sudden filled up, it would take at least two years for any new boats to hit the water, by then the cash flows to STNG during 2020 and 2021 could be large enough to materially alter the company’s balance sheet.

A major negative over the past few years has been large share issuances to carry the company through the low day rate period of 2017-2018 and finance the purchase of Navig8 in summer 2017 (which might be paying off now, but has been awful to date).

Pro-forma for the Trifagura deal in September, which added 19 boats to the fleet, the company’s Enterprise Value should look like the following:

EBITDA is obviously a function of day rates and depends on the boat.

Here is what it looks like given four different day rates by boat type proforma including Trafigura. I will assume $240mm of combined SG&A and D&A and I will not assume any advantage to fuel costs. I also will assume 100% utilization. I believe the D&A number is conservative as a proxy to capex and paying down debt.

You would have to subtract ~$225mm from these numbers for interest expense to get a free cash flow number. Interest expense would obviously decrease as debt was paid down. But even assuming the highest finance cost, it is safe to assume the company could deleverage by ~30-60% over the next two years with most of that value accruing to shareholders. I do believe there is upside to these numbers.

If the company approaches $2bln of free cash over the next two years, I could see the stock 50-100% higher from here. I know that’s a big range, but there is a lot of leverage here as you can see.

Just about anyone who has touched anything in shipping over the past 10 years has lost money. This down cycle has been truly awful. A lot of management teams in the industry are totally self-serving and crush their shareholders on the regular. STNG management has certainly had their issues where they could be accused of doing things that were definitely great for them and maybe better for their shareholders if the cycle goes the right way. They have also been promotional and called the turn in the industry far too early. I certainly believed the thesis too early and have been really negative on this investment until very recently.

That said, I do believe the time is finally upon us where a lot of forces are combining to make at least the next two years great for the company. I caution that shipping is an enormously cyclical and volatile business, but I believe we are on the upswing part of that cyclicality and volatility. Bugbee recently spent over $750k buying January calls that do not pay off for him unless the stock is over $35. That is not a chump change investment in call options.

Disclosure: I am/we are long STNG. I wrote this article myself, and it expresses my own opinions. I am not receiving compensation for it (other than from Seeking Alpha). I have no business relationship with any company whose stock is mentioned in this article.