There is no way to know for certain what the stock market will do next. However, it makes a lot of sense to monitor certain key variables to measure risk appetite among investors and the overall economic environment. Variables such as credit spreads, shipping demand, and industrial metal prices have always been considered as potential leading indicators for the market.

There has been plenty of uncertainty on the economic front over recent months, with several economic indicators, especially those related to exports and manufacturing, showing reasons for concern. On the other hand, semiconductors remain a bright spot in the current market environment.

Quantifying The Signals From Semiconductors

The chart below shows the performance of the VanEck Vectors Semiconductor ETF (SMH) in comparison to the SPDR S&P 500 Trust ETF (SPY) over recent years. From a simple visual inspection, we can see that the semiconductor ETF many times works as a leading indicator for the market-tracking ETF.

However, it is important to quantify the relationship between the two ETFs in order to build an actionable strategy. We begin by creating a ratio that measures the relative performance of the VanEck Vectors Semiconductor ETF versus the SPDR S&P 500 Trust ETF. When this ratio is rising, it means that semiconductors are outperforming, which has bullish implications for stocks. 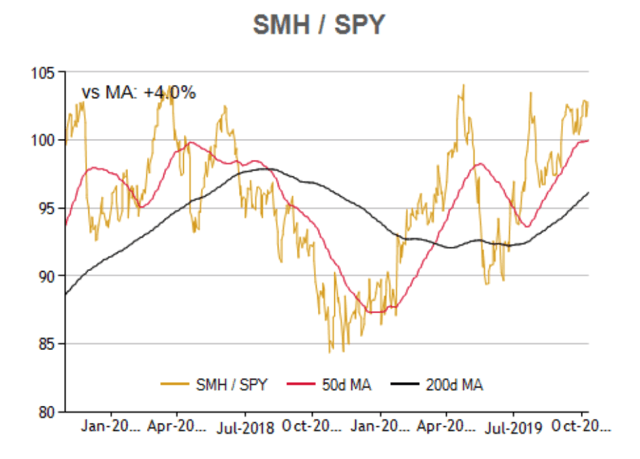 When the ratio is in an uptrend, the quantitative strategy is invested in the Invesco QQQ ETF (QQQ). Alternatively, when the ratio is below the 100-day moving average, the strategy goes for safety by investing in the iShares 20+ Year Treasury Bond ETF (TLT). 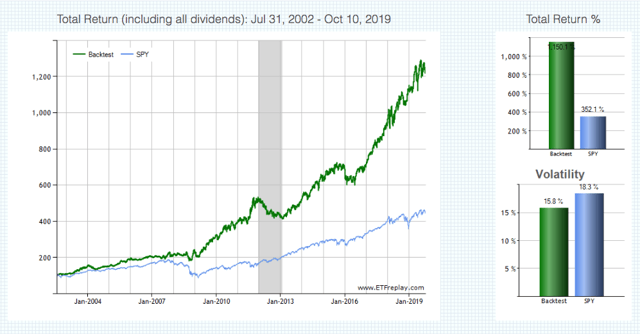 The maximum drawdown – meaning maximum capital loss from the peak – was 22.6% for the quantitative strategy versus a maximum drawdown of 55.2% for buy-and-hold investors in the SPDR S&P 500.

The long-term return numbers are clearly attractive, and looking at the big picture is always important. However, we also need to consider that a strategy such as this one can underperform considerably in some periods.

We can gain a deeper understanding of how the strategy works by looking at the annual return numbers since inception. 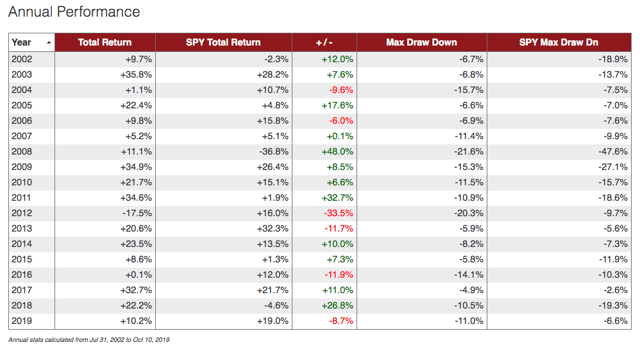 The strategy is based on trend following principles, so it generally does very well when the main trends in different assets are strong and well-defined. Conversely, when markets are moving sideways and trends are weak, the quantitative strategy can be expected to underperform.

For example, the year 2012 was the strategy’s worst year, losing -17.5%, while the SPY gained 16%. The year 2012 was a choppy period for the semiconductors ETF, showing considerable volatility and moving mostly sideways over that period. In this context, the strategy produced lots of false signals, and this had a negative impact on returns. 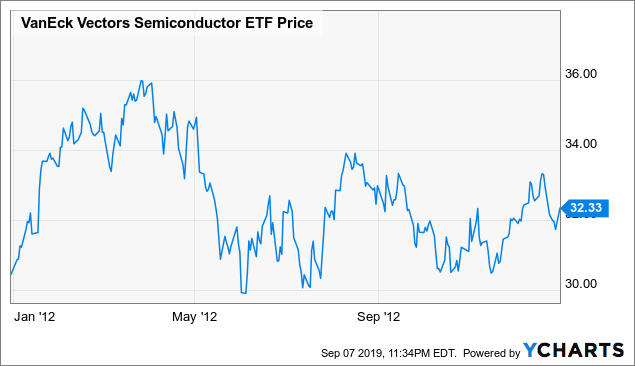 On the other hand, in a year such as 2008, when global stock markets collapsed and the S&P 500 had a maximum drawdown of 47.6%, the strategy gained 11.1% by investing mostly in treasuries.

Risky assets had a great year in 2017, and the strategy also outperformed the market by investing in the more growth-oriented QQQ, so the strategy gained 32.7% versus 21.7% for the SPDR S&P 500.

Listening To The Data

Markets have been under a lot of uncertainty over recent months, and there have been plenty of economic data points signaling reasons for concern, both in the US and abroad. However, semiconductors have been performing remarkably well, and the quantitative strategy has been in risk-on mode since March of 2019.

As of the time of this writing, the VanEck Vectors Semiconductor ETF is close to all-time highs, both when seen on a standalone basis and when compared versus the rest of the market on a relative basis. Not only is the sector performing well in terms of price returns, but the fundamentals are also evolving in the right direction.

According to data from MRB Research:

Having suffered a sharp downturn last year, the momentum of global semiconductor sales has now clearly bottomed out, and earnings are recovering in level terms along with sales.

The following charts tell the story quite well, and it has bullish implications for the semiconductor sector over the middle term. 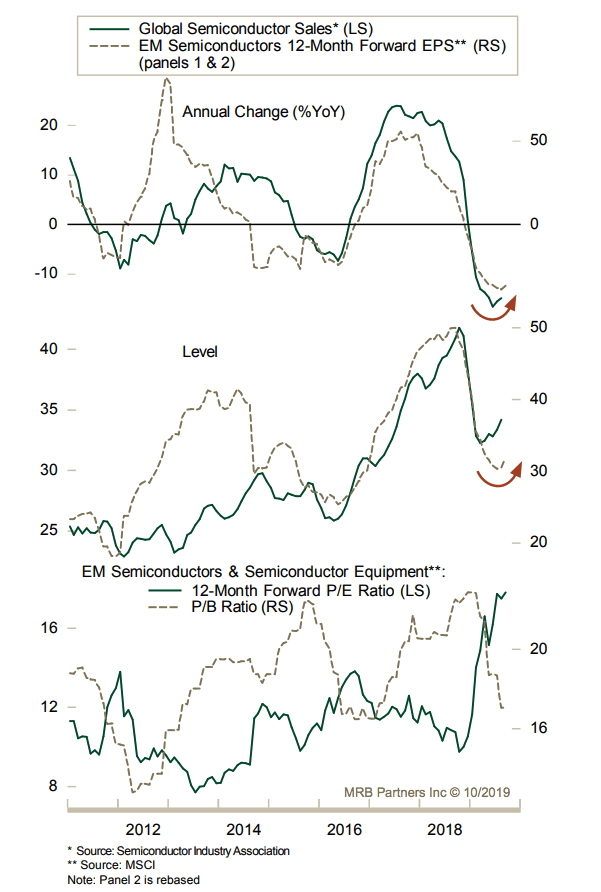 The stock market evolution will depend on a multiplicity of variables, many of them related not only to the fundamentals but also to investor sentiment and expectations. However, evaluating the hard evidence is a far sounder approach than relying solely on subjectivities and opinions when analyzing the market environment.

Intermarket relationships don’t always hold stable all the time, but the semiconductor sector is typically a key leading indicator for the market as a whole, and the current strength in semiconductors is a bullish piece of evidence for the stock market.

Statistical research has proven that stocks and ETFs showing certain quantitative attributes tend to outperform the market over the long term. A subscription to The Data Driven Investor provides you access to profitable screeners and live portfolios based on these effective and time-proven return drivers. Forget about opinions and speculation, investing decisions based on cold hard quantitative data can provide you superior returns with lower risk. Click here to get your free trial now.