The IOTA/BTC pair is starting to stage a recovery after a period of sustained downbeat prices. IOTA (MIOTA-USD) is now benefiting from what is colloquially known as the “altcoins season.” This is a time when many altcoins which are paired with bitcoin for trading start to experience price appreciation as a result of falling bitcoin prices.

With bitcoin now trading at just under $8,300 on the day after falling out of the descending triangle in its pairing with the US Dollar, several altcoins are gaining on BTC in their paired listings, while several cryptos that are tied to BTC in structure (such as LTC, BCH and ETH) are all posting losses.

So what does the future hold for IOTA/BTC? Here’s the analysis below.

The IOTA Foundation has signed a partnership agreement with the Linux Foundation to jointly develop the LF Edge network. Citing an official blog post, it is said that LF Edge would be an integrating organization that would foster “an open, interoperable framework for edge computing independent of hardware, silicon, cloud, or operating system.”

The development is being hailed as one which would bring the power of the blockchain closer to various cloud computing and open source communities, which would bring them together. This news is not expected to have short-term impact on IOTA/BTC. Short-term impact is being delivered by the situation with BTC, and the general crypto market is following.

The weekly chart below shows that the DeMarker oscillator started to turn upwards, after a prolonged period of time in the oversold region.

Consequently, IOTA/BTC’s downward price movement stalled as BTC found itself limited in its pairing with the US Dollar in a descending triangle. We can also see that price had started to turn upwards as BTC’s drop accelerated. 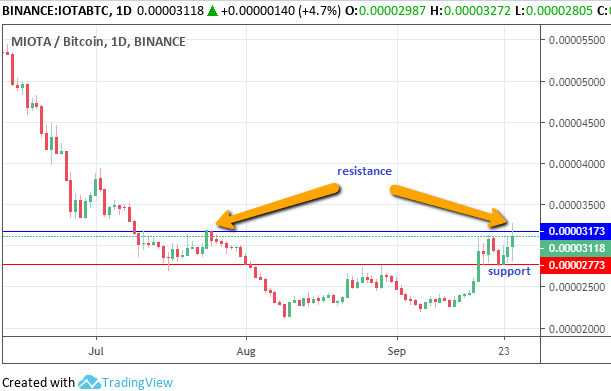 The daily chart shows a clearer picture, with price action that turned upwards and broke the initial resistance at 0.00002773 (July 16 low acting in role reversal and Aug 28 high). The breakout candle stopped just short of the 0.00003173 resistance (July 24/25 highs), and what followed in the last five days has been a succession of bearish and bullish candles whose highs and lows have defined a clear range.

The range has the present resistance at 0.00003173 as ceiling and the broken resistance (now support in role reversal) at 0.00002773 as price floor. So what is the outlook for IOTA/BTC in the light of the chart information?

The current price movement is inversely correlated with the movements of the BTCUSD pair. BTCUSD has stalled at 8,400 as the initial pitstop, although there is a support level lurking on that chart at $7,170. In other words, there is a high possibility of further downside on BTCUSD to complete the descending triangle’s measured move. Therefore, it is possible that IOTABTC could enjoy further upside movement.

For this to materialize, the ceiling has to be broken decisively with at least a 3% upside penetration or double candle close, accompanied by an increase in trading volume. If this occurs, price would target the next resistance, located at 0.00004027. This is the site of a previous high on July 1 and a previous low of May 11 acting in role reversal.

However, if BTC starts to strengthen, this could lead to a breakdown of the range and resumption of the downtrend. Such a move would target the lows at 0.00002227 (Sep 5 lows).

In essence, we can expect price action to trade in a range until a BTC-related factor pushes IOTABTC out of the range in any of the two directions.

The long-term and mid-term/short-term outlook of IOTA is:

Long-term, IOTABTC is still in a downtrend, even though the presence of progressively higher troughs on the daily chart (August and September) is an indication that the downtrend may have stalled for now. Indeed, those who are bearish on this pair would see this latest recovery as an opportunity to sell on rallies.

Medium-term/short-term market outlook is bullish. More price depression is predicted for BTC, which would extend the “altcoins season” and possibly lead to further upside in IOTABTC. However, BTC prices could be pushed up again and this constitutes a bearish influence on the pair. Therefore, IOTA fundamentals would have to pick up to continue supporting bullish sentiment into the long term.

Did you know the crypto market is up 140% since Jan 1st? Is the bear market over? Is bitcoin going to shoot up like it did in 2017?

We provide news, research, technical analysis and more at the Coin Agora on all things crypto!

Sign up now and get instant access to our 2019 Pick Portfolio – where three of our picks are up more than 80% since January!