The S&P 500, Dow Jones and Nasdaq 100 are poised for an above-average annual return in 2019, but time remains yet. As the Summer months fade and the calendar ticks into October, market participants will have to weather a month which has historically been the most volatile. Since 1990, October’s average VIX reading has been a lofty 21.7, high enough to beat out neighboring September and November which boast readings of 20.2 and 20.5 respectively. Therefore, if history is any indication, the market may be headed for another period wild price fluctuations.

Alongside heightened volatility, October enjoys the second-highest volume on average. Trailing January alone, an average of 816 million shares of the S&P 500 are exchanged each every day of October – compared to an average of 825 million in January. Despite the increased volatility, the S&P 500 has climbed 1.46% on average during October since 1990. While the longer-term view paints an encouraging picture, some investors may be wary of the month ahead after last year’s rout. 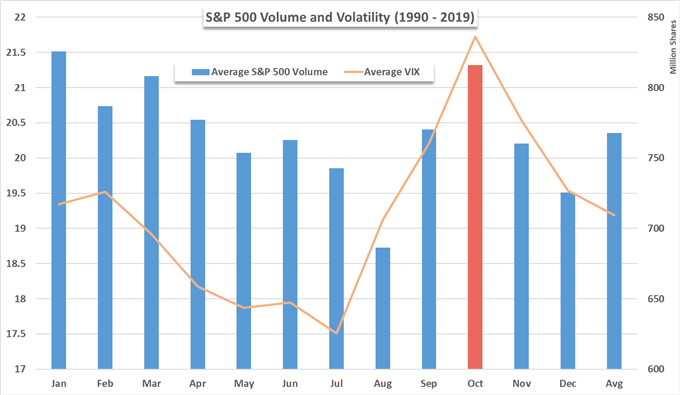 To that end, October 2018 saw the S&P 500 drop roughly -7.25% as trade wars and global growth concerns weighed on the outlook for equities. At the time, the Federal Reserve had not delivered its dovish pivot, so forecasts were becoming increasingly bearish as monetary policy looks to constrict further on tepid growth.

With that in mind, past performance is in no way a predictor of future results and both the fundamental and technical landscapes are vastly different than a year ago. Still, the first day of October saw an immediate uptick in the VIX after a contraction in manufacturing PMI data put investors on edge. Therefore, it may be prudent for investors to be appropriately positioned for October’s historical conditions – even if they fall short of last year’s rout. In the meantime, follow @PeterHanksFX on Twitter for further updates and analysis.