The OECD is proposing a broad and sweeping change to the international tax system. The current method of taxation is based on a system that traces back to the early 20th century and is based on the concept of “permanent establishment.” This is based on physical presence, which allows technological and intellectual property companies to shift income to low-tax jurisdictions. According to the FT, the new system would allow countries to tax profits based on a proportion of total profits. It would also grant developing economies broader taxing capabilities. The plan was just unveiled today and would take a very long time to implement since it would require a reworking of the cast network on international tax treaties currently in place. But it is the start of a potential new international taxing regime.

While I’m not the biggest fan of the JOLTs release, several of the people I follow on Twitter made a solid observation about today’s report: the pace of job openings is clearly declining.

The chart above shows that the number of openings — while high — is moving lower. Still, the Atlanta Fed’s Labor Market Spider Chart shows a healthy labor market: 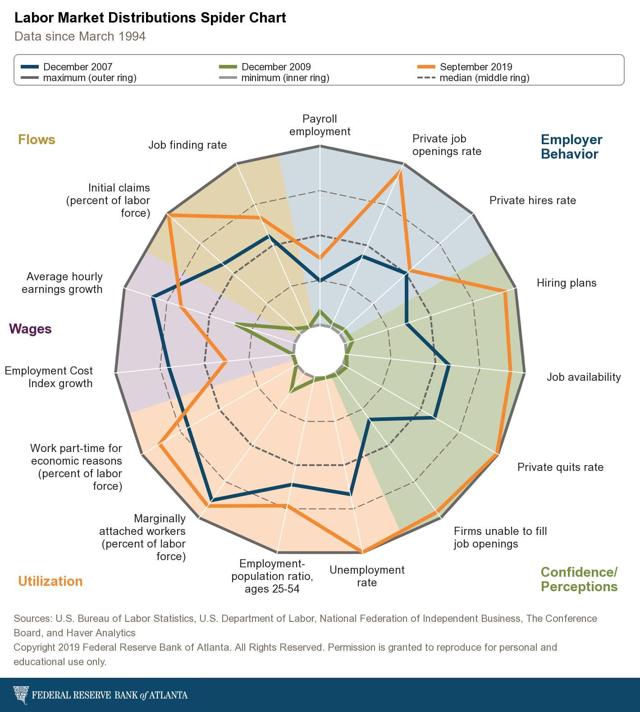 The gold line shows current levels while the teal line shows the highs from the previous expansion. With the exception of wages, the current labor market is in stronger shape.

Looking under the hood of the market, we see that charts for the major market sectors aren’t that inspiring:

Most of the conservative sectors have strong charts: real estate (top row, second from left), consumer staples, and utilities (middle row, last two) have solid charts with strong trends. Technology (middle row, second from the right) — the largest component of the SPY and QQQ — is moving sideways, as are most other charts. On the plus side, the only sector that is moving lower is energy (top row, far left).

In general, this is an “equities up, bonds down” table, which is what we’d like to see. Once again, however, large-caps are leading the way higher. The QQQ, SPY, and OEF were the top performers; while the IJH, IWM, and IWC gained, their respective gains were less than their large-cap brethren.

Today, I’ll be looking at the shorter time frame charts to see if there is any underlying trend implying an upward move in the near future (hint: there’s not).

The 5-day SPY chart isn’t that favorable. From October 3 to 7, there’s an upward arc followed by a gap lower. Prices have trended modestly higher since, but the rally isn’t that inspiring.

The 2-week charts aren’t that encouraging, either. 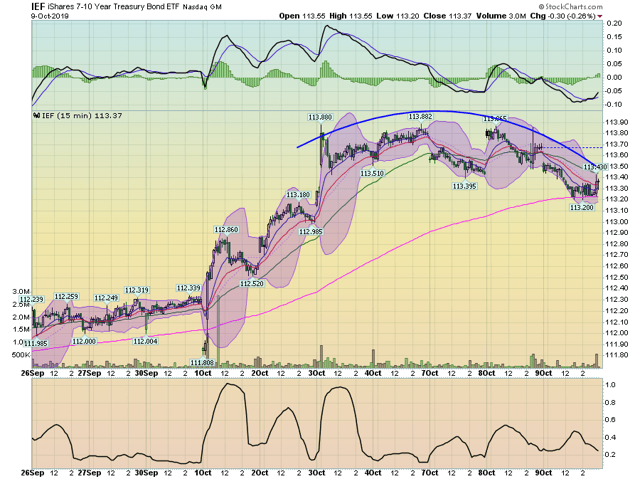 The IEF is trending modestly lower. You could argue the chart is forming a rounding top. But with prices finding strong support at the 200-minute EMA, there’s also a good argument to be made that prices are simply drifting lower. 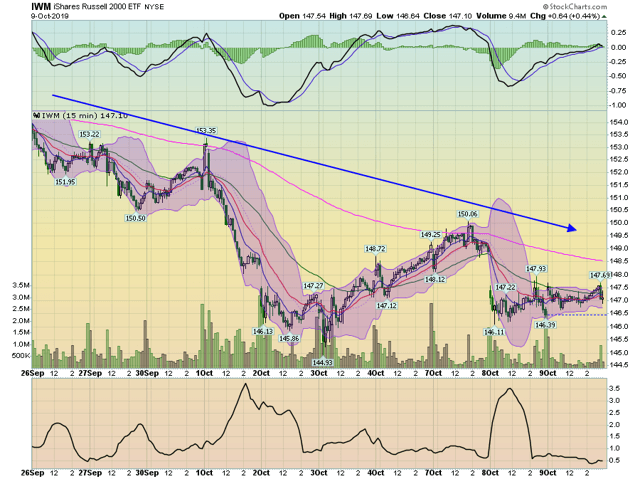 The IWM is in a strong downtrend; note the 200-minute EMA, which has been trending lower for a vast majority of the last two weeks 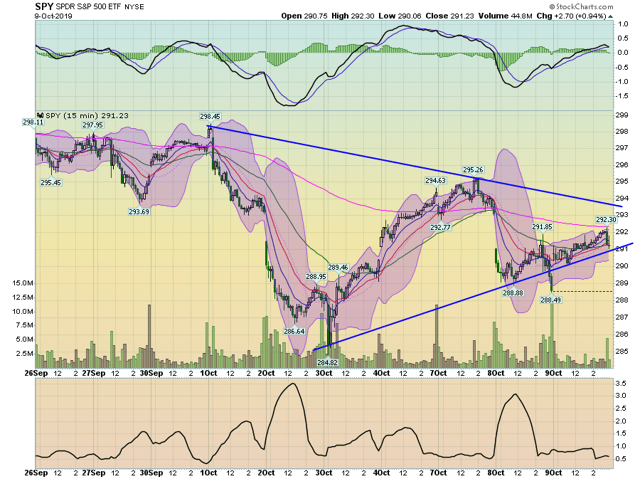 The SPY has been consolidating in a triangle pattern.

Pulling the lens back to the 30-day time frame doesn’t offer the bulls much solace: 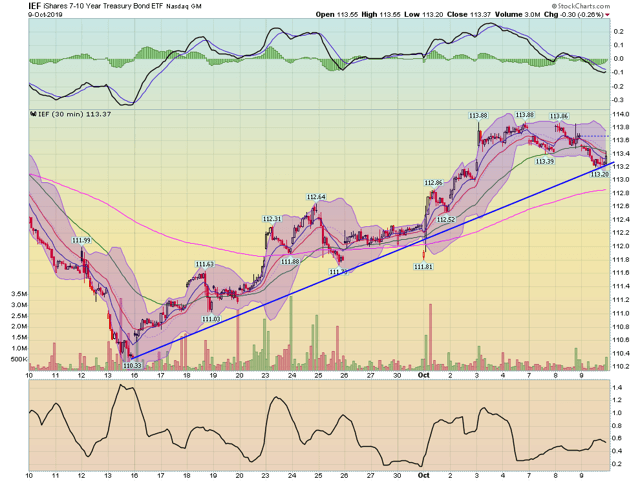 The Treasury market is in a solid uptrend. 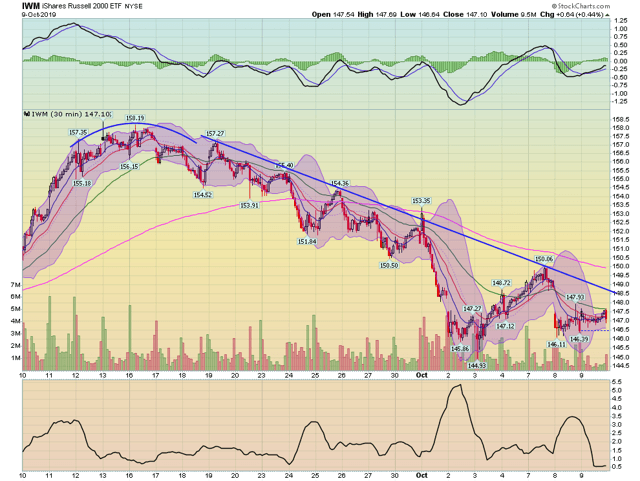 The IWMs downward move started on September 15 and has been trending lower since. 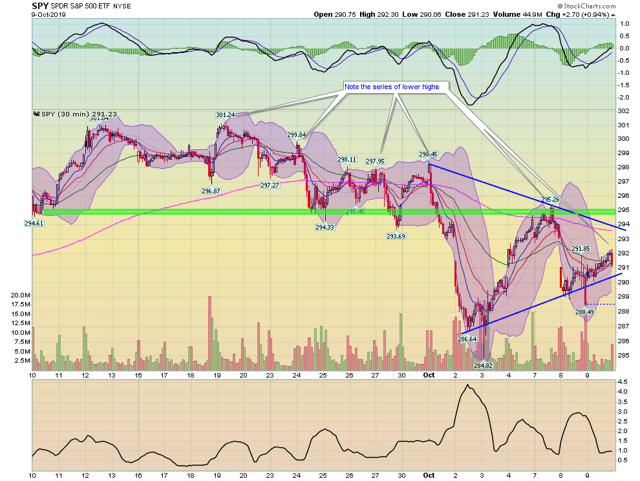 The SPY broke below the 295 level at the beginning of the month and started its consolidation a bit before that technical event.

The good news is that there’s nothing in the above charts to indicate that the market is in for a large downturn. But the bad news is there doesn’t seem to be anything to excite the bulls, either.