If Australia finds it has a strong Australian dollar, and it has higher unemployment, then it would have to respond, and that would either be by increasing domestic demand or by weakening its own currency. – Ben Bernanke

Australia chose the second course of action. After peaking around 1.10 in 2011-2012, the Australian dollar (NYSEARCA:FXA) threatens to reach the 2008 financial crisis levels again.

One of the last Lead-Lag Reports I wrote mentioned the fact that the Australian dollar has declined to its lowest levels since the past decade as rate cuts by the central bank send signals of economic slowdown. Moreover, the Reserve Bank of Australia (RBA) reduced its cash rate to an all-time low of 0.75% as it seeks to boost employment and economic growth.

The move lower in the cash rate level began during the 2008 financial crisis. And, since 2012, the RBA didn’t hike anymore. Looking at the recent economic data, the RBA is right. Australian consumer confidence just dropped to the lowest since July 2015.

As it turns out, the RBA rate cuts are only making consumers gloomier. Bloomberg Consumer Confidence dropped 5.5% to 92.8 in October down 8.4% since the new wave of cutting began in 2019. 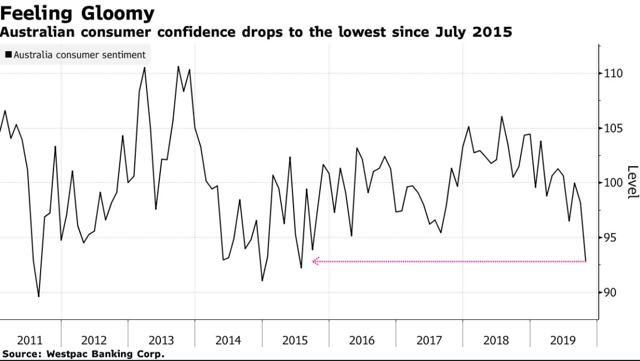 A quick look at the $AUDUSD pair shows that it accurately reflects the RBA’s easing frenzy. After a three-year-long triangle broke lower, nothing stopped the pair anymore.

Let’s not forget the Aussie pair reflects the differences between the RBA’s and Fed’s monetary policies. All this time the RBA eased, the Fed was hawkish and managed to push the federal funds rate well beyond 2%.

But now, the Fed announced a “not QE” program designed to buy $60 billion of Treasuries per month. Under any other situation, this should be bearish the USD, sending the AUDUSD pair higher.

However, scratch a bit under the surface and that’s unlikely to happen in the short run. According to its schedule, the US Treasury will withdraw roughly 110 billion USD before New Year by issuing bills and putting the USD in its general cash account at the Fed. So, over the next couple of months, the $60 billion announced Friday would merely counter this effect. There is still a strong USD demand in the months to come.

Which brings us back to the AUDUSD pair. As it eyes the all-important financial crisis support, it moves in a descending channel constantly making lower lows and lower highs.

That’s the definition of a bearish trend, and for as long as it holds, the 2008 support level attracts the price.

Your Biggest Mistakes Are Often Invisible.

Sometimes, the biggest risks in your portfolio are just sitting there, waiting to surprise you.

That’s why paying attention to the right data and insights is so important. A few quick tips from an investment manager isn’t enough: you need to dive deep into the signals that shake the market and move your portfolio.

This kind of in-depth research is exactly how I’ve managed to become an award-winning author, and I’m sharing all of my data analysis with you right here.

Click here now to get 14 days free of my Lead-Lag Report today.

Additional disclosure: This writing is for informational purposes only. It does not constitute an offer to sell, a solicitation to buy, or a recommendation regarding any securities transaction. It also does not offer to provide advisory or other services by Pension Partners, LLC in any jurisdiction in which such offer, solicitation, purchase or sale would be unlawful under the securities laws of such jurisdiction. The information contained in this writing should not be construed as financial or investment advice on any subject matter. Pension Partners, LLC expressly disclaims all liability in respect to actions taken based on any or all of the information on this writing.