The Buckle, Inc. (NYSE:BKE) with a market cap of approximately $1 billion is an apparel specialty retailer with currently 449 retail stores in 42 states. The company operates in a segment that has been particularly challenged in recent years based on lower traffic at traditional shopping malls and changing consumer habits amid the rise of e-commerce. Indeed, a number of high-profile bankruptcies in recent years including apparel stores like “Nine West”, “Wet Seal”, “Gymboree”, and “PacSun” highlight the difficult environment for companies like The Buckle that count on brick and mortar sales as part of their core business. Despite a decline in revenues and a more muted growth outlook, BKE is now in something of a turnaround, presenting comparable store sales growth this year and profitability. Furthermore, its clean balance sheet with no long-term debt makes it an intriguing investment opportunity. This article takes a look at how BKE is doing and our view on where the stock is headed next.

Buckle is really a survivor in what has been called the retail apocalypse. From peak revenues of $1.153 billion back in 2015, net sales fell to $886 million for the last fiscal year. 2017 was a particularly weak year when comparable store sales fell by 13.5%. The company’s response has been to effectively retrench and close underperforming locations, which has resulted in a current store count of 449 compared to 468 in 2015. Even as store level income declined, the company was able to remain profitable over the period by what we consider to have been effective management including tight inventory control and the ability to hold down expenses. Over the trailing 12 months through Q2 2019, the company has posted a net income of $93 million on $885 million in net revenues, representing a 10.5% profit margin. 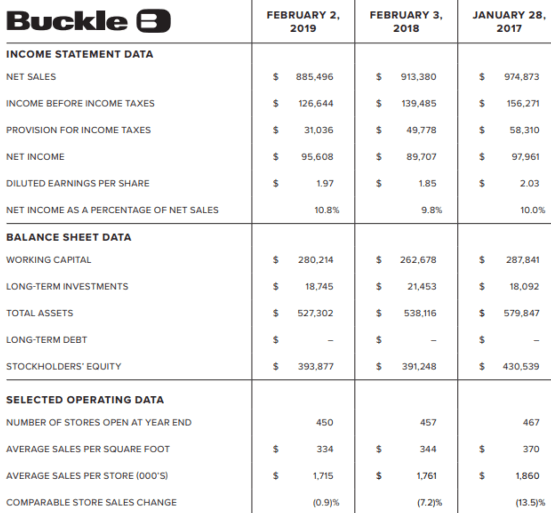 There are a number of points we like about BKE including its strong balance sheet position, relatively high profit margin above 10%, and a quarterly dividend that yields 4.8%. The other impressive trend we’re noticing is a string of positive comparable store sales numbers including the most recently announced numbers for the month of September that showed a 3% increase from the period in 2018. Year to date, comparable store sales are up 0.5%, which is in contrast to declining figures from larger apparel retailers and department stores. 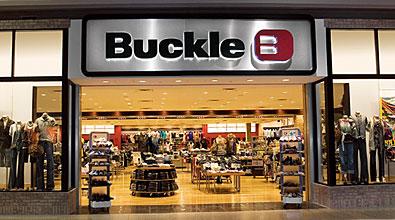 One of the concerns for the company has been its exposure to product sourcing from China. Earlier this year, the company mentioned up to 50% of its merchandise indeed comes from China. Updating the development, management noted in its last earnings conference call that it has not seen any material impact:

We still see the tariffs having a very small effect on our business throughout this year. We work substantially with our branded vendors that we are not seeing that effect us and we have also worked with a number of our makers over a long period of time and we are seeing very few situations that that will have an effect on this year as we confirm prices, landed prices early on before placing orders. And I think we have a good handle on that throughout this year.

Overall, present conditions appear stable even if the long-term outlook remains unclear. The risk here is that a string of disappointing comparable store sales numbers will be reported going forward, thereby leading to a more pessimistic outlook. In the mean time, we think cash flow generation remains strong and the dividend well supported.

The regular quarterly dividend of $0.25 per share represents a payout ratio of approximately 55% of net income, while BKE has traditionally distributed a special dividend and an annual dividend. Including a $1.00 per share special dividend this past January effectively doubling the annual payout. While the total payout ratio for the year is 100%, the flexibility of forgoing a special payout during a possible period of financial stress keeps the regular payment more sustainable.

BKE remains a value-pick even as the stock is now up 40% from its lows back in the summer. An increase in comparable store sales for the past three consecutive months likely explains the renewed bullish sentiment along with the positive developments from the U.S.-China trade dispute since September. Among current consensus estimates for revenues through next year, expectations are quite low with the market projecting a decline of about 0.6% for 2020. The potential that the company can outperform this low bar of expectations represents the upside from here.

Buckle has generated approximately $105 million in free cash flow over the trailing 12 months, representing a price to free cash flow ratio of 9.6x. The conversion from net income has been over 100% this past year, implying the company has strong cash flow generation. Considering the standard trading-based multiples like the P/E ratio and price to sales ratio, we note that BKE’s valuation remains well below peak levels from prior to 2015, although we find it unlikely to command those types of premiums in the foreseeable future.

Taking a long position in BKE at the current level requires the belief that both the worst of the industry trends are behind it and also that the current market cycle with favorable consumer spending trends and steady economic growth will continue. Considering our more bearish opinion of global macro conditions and an expectation of a weakening economy in the U.S. over the next year, we rate BKE as a HOLD. Investors are being rewarded with a generous yield of 4.8% and we see the payout as safe given current financial conditions. We think the current forward P/E ratio at around 10x is fair. What keeps us on the sidelines is largely a view that the current weakness in the apparel retail industry for brick and mortar stores will continue.

The Buckle, Inc. has been a survivor during the ongoing retail apocalypse and now an exception in the specialty apparel industry with positive same-store sales growth this year. Recognizing that Buckle has been able to effectively stabilize its business in the near term, we don’t see a fundamental catalyst for long-term growth significantly beyond current expectation. The setup here of a “strong balance sheet/ weak growth” type investment often times has the highest risk should that already weak growth end up under performing. Investors should carefully monitor the monthly sales trends as reported by the company.