Stage Stores (SSI) is in the midst of what looks to be a successful turnaround and we are a little late to this party, which is already in full swing as you can see here:

That is quite a party. Is it matched by developments on the ground?

Not really, stagnant revenue and declining operational performance, but with the stock five-folding since mid August and really taking off since mid-September, what is going on?

Well, first off, Stage Stores is another retailer (department store) that got into trouble, as the graphs above testify. But unlike many other retailers, the company seems to have hit on a winning turnaround formula, which consists of two parts:

Before we get to these, here is what the company’s stores and websites sell, from the Q2 earnings deck: 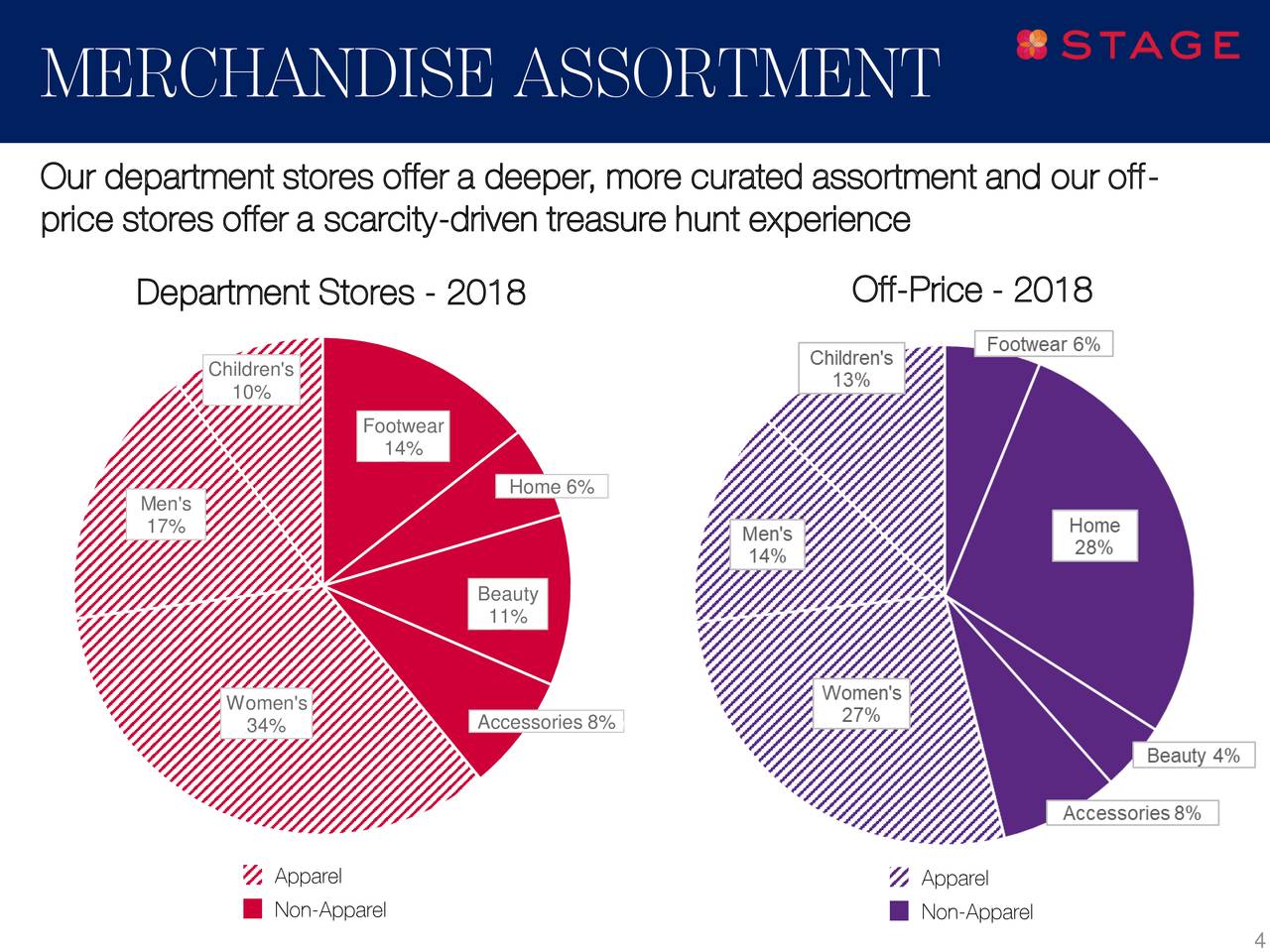 And here is where they are located (and the names of their e-commerce sites), from the Q2 earnings deck: 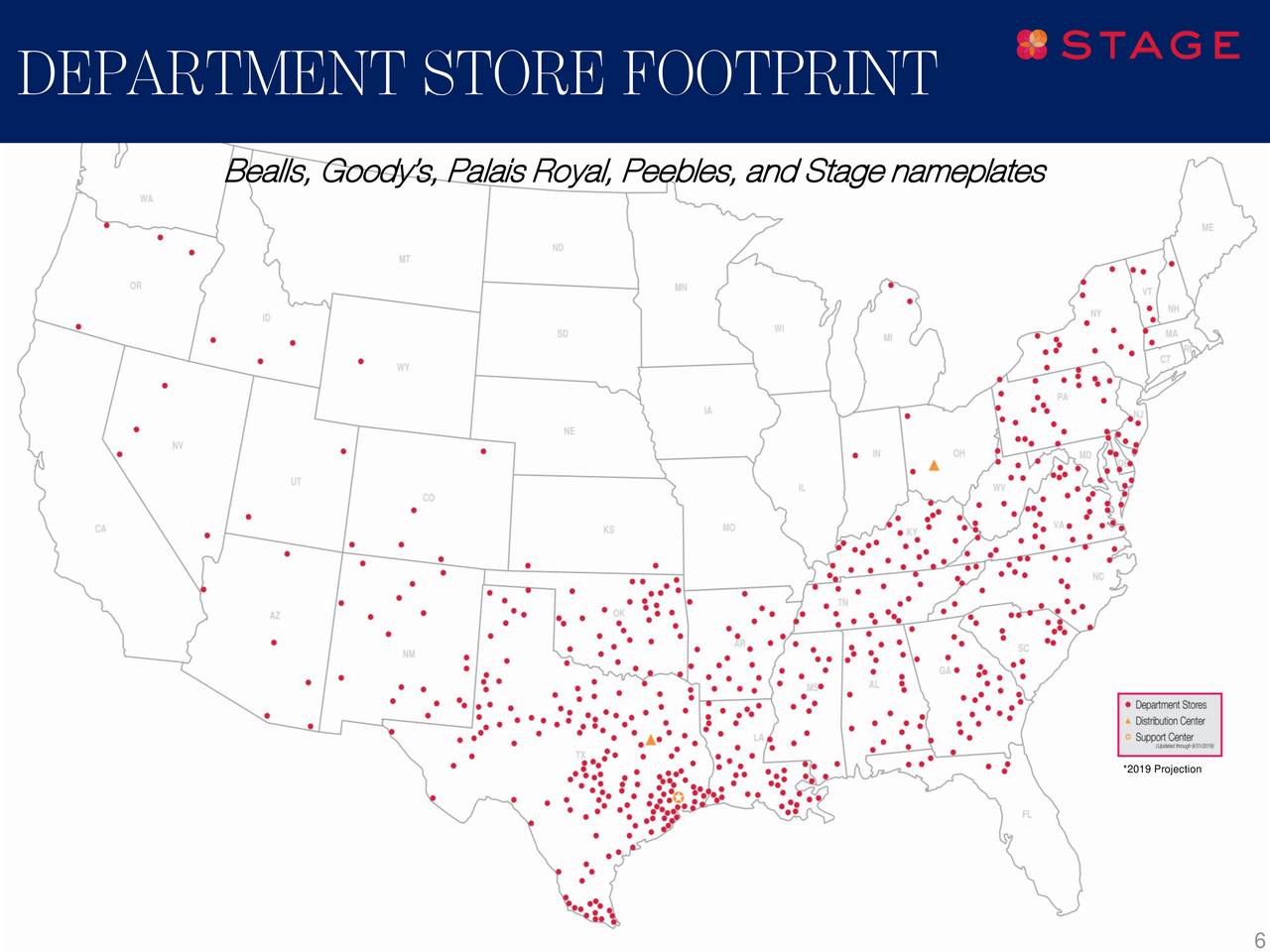 The first part of the strategic turnaround is simply something that most retailers hitting difficult times execute as well, store closures. This provides relief through:

In 2019, the company plans to close between 55-60 department stores and will end the year with approximately 740 stores. Management plans another 40 store closures next year.

That formula is “off-price,” from 2015. Here is Handshake describing the strategy:

At first sight, it might seem as a curious strategy in an economy that is close (or at) full employment at the tail-end of what is the longest post-war economic expansion.

However, not everybody is benefiting from the good economic circumstances and with the relentless growth of e-commerce giants like Amazon (AMZN) and other big-box retailers like Walmart (WMT) increasingly turning to online sales, the pressures on retailers to create some kind of edge have increased tremendously.

The company entered the off-price segment in 2017 with the acquisition of Gordmans in April last year. From the Q2 earnings deck: 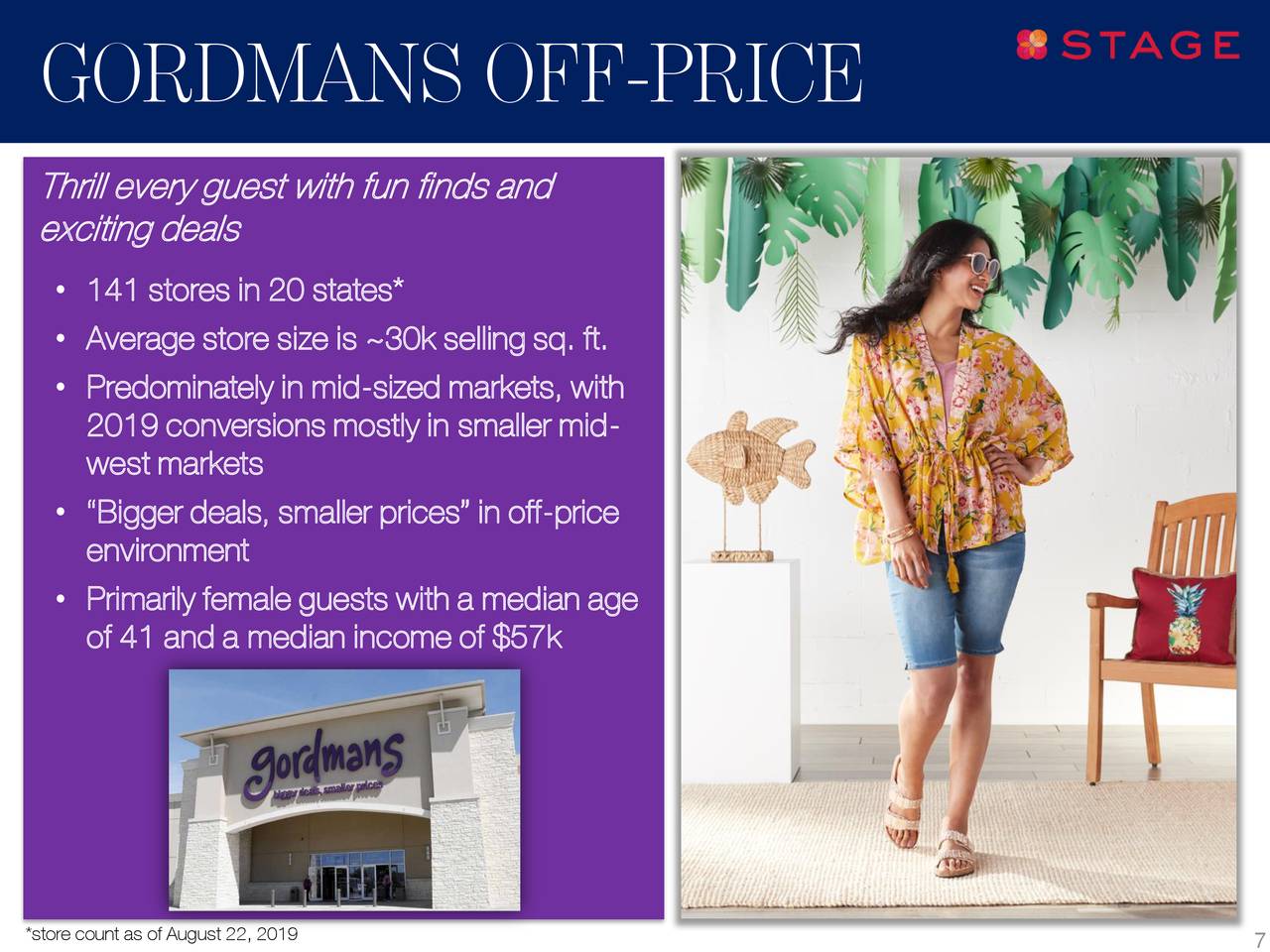 And here is where Gordmans stores are located: 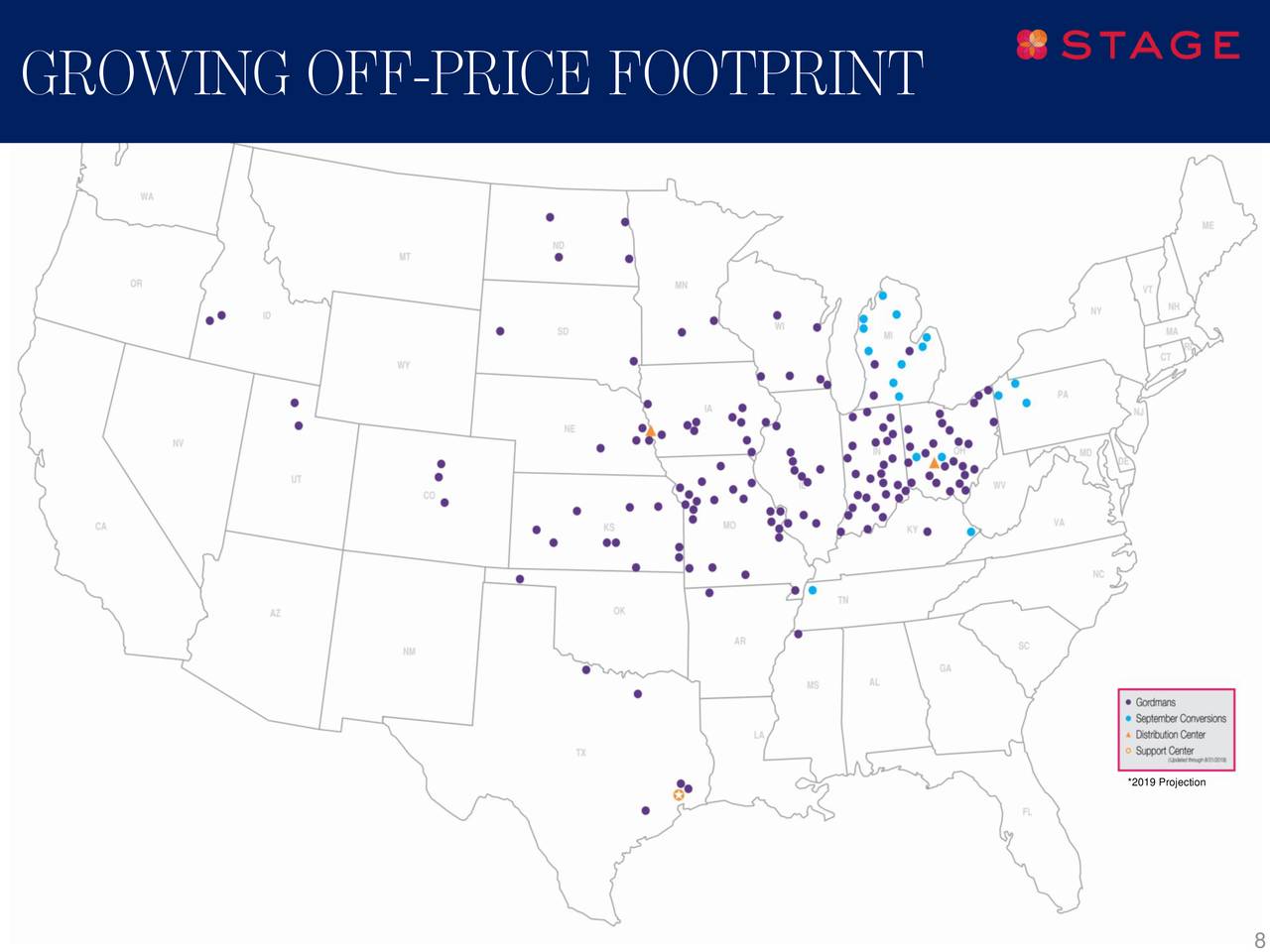 And more importantly, here is the rationale given for the off-price strategy. From the Q2 earnings deck: 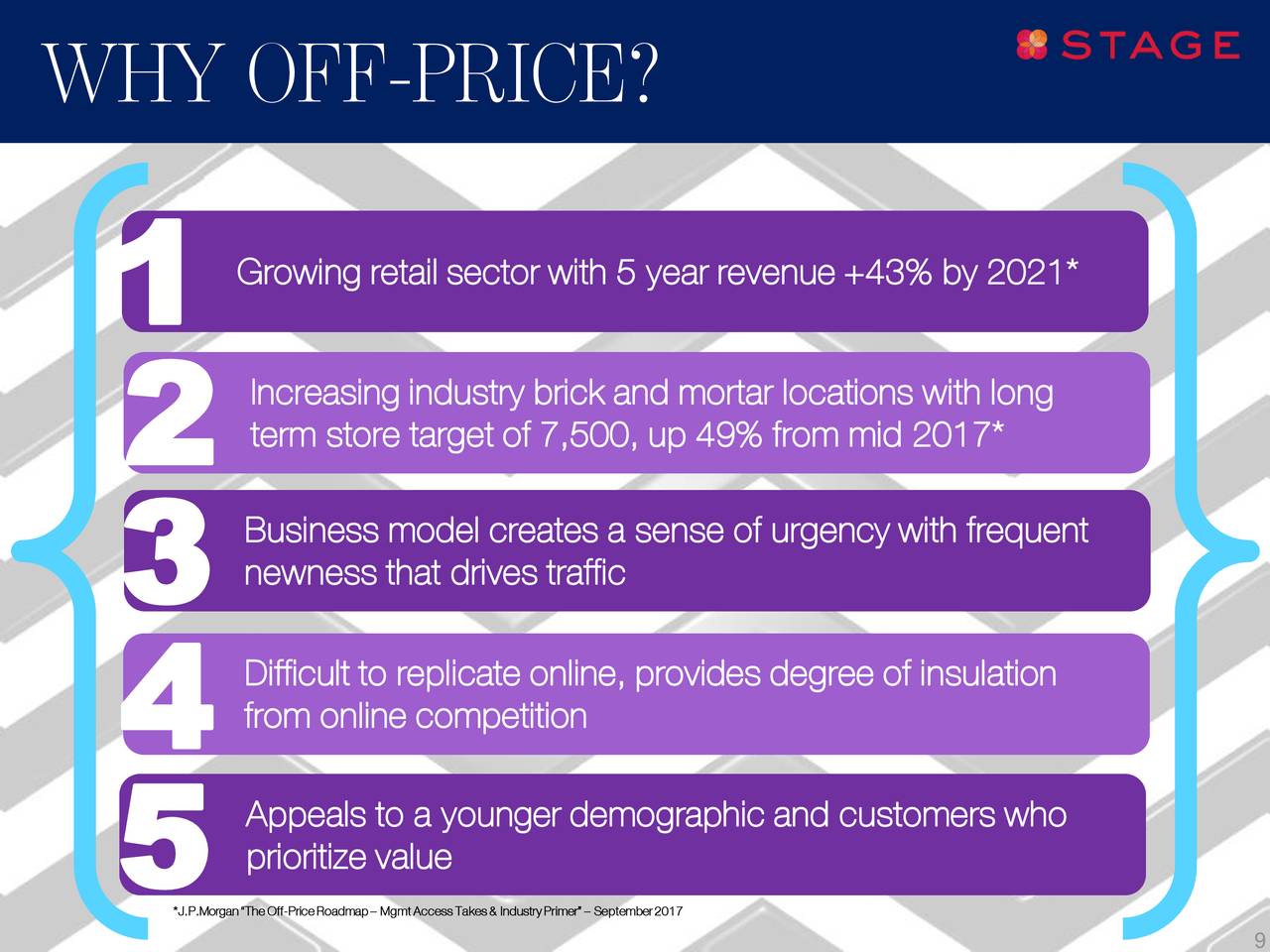 With the following strategic benefits: 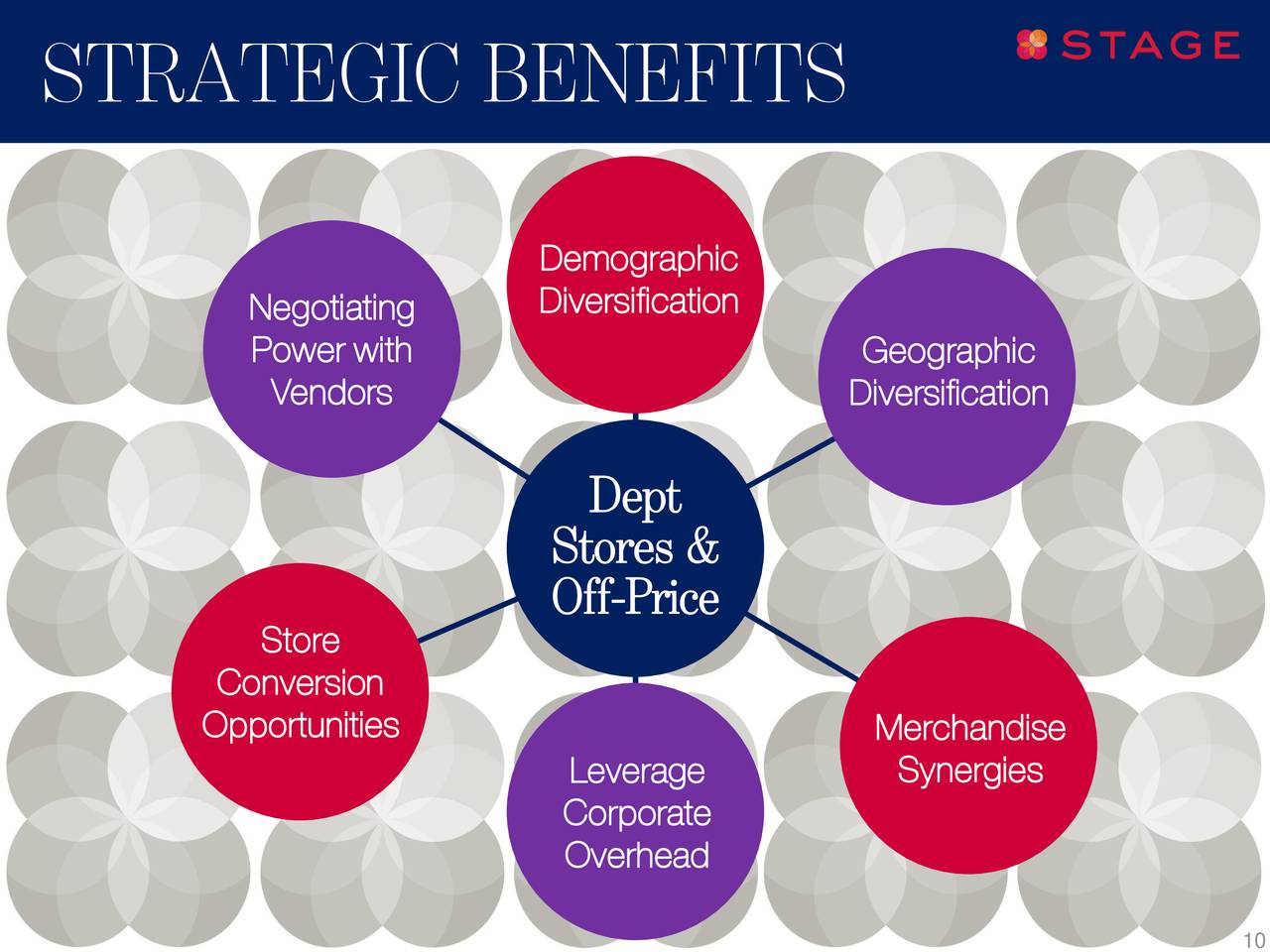 And there are indeed important benefits to the strategy:

However, there are also some disadvantages like higher distribution cost (the mirror image of faster inventory turns). 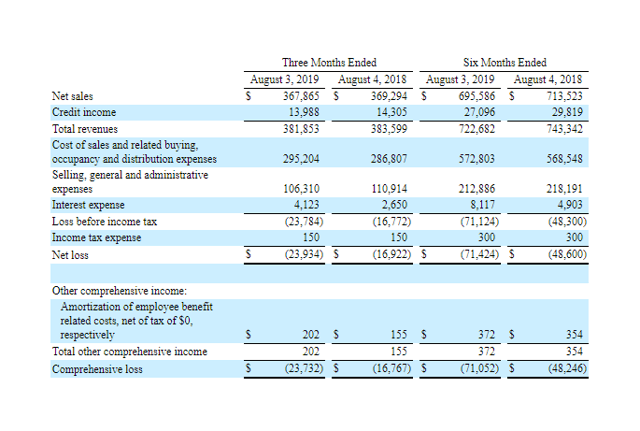 There are some good news bits:

And then one might almost forget, but the Gordmans acquisition did something more than just introduce the off-price concept. From the Q2CC:

Replicating the Gordmans home offering in department stores has resonated strongly with our guests and we have more than doubled home sales.

So the cross-selling of Gordmans’ stuff in their department stores is going very well.

From the Q2 earnings deck: 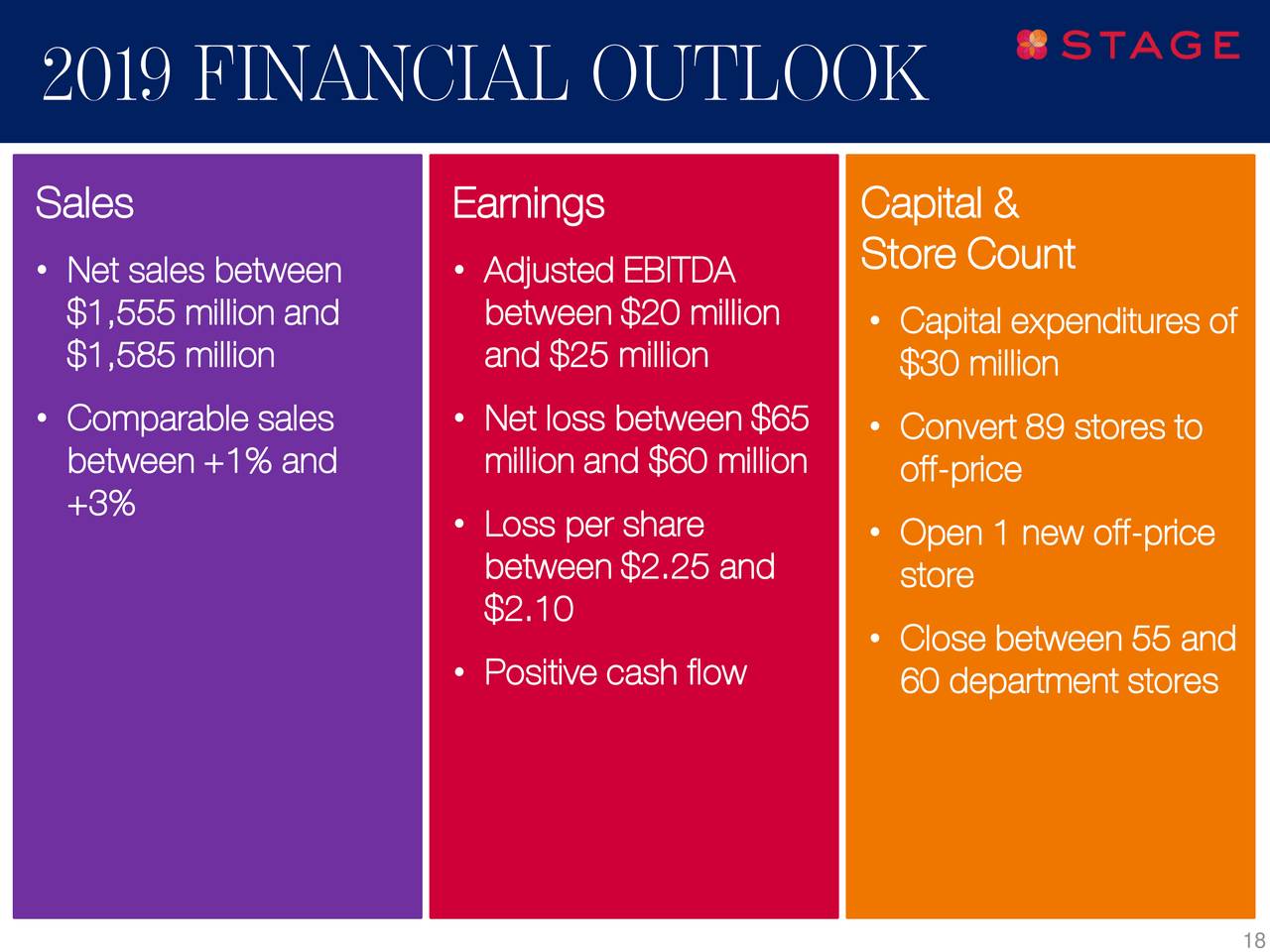 There are some tentative signs that the off-price strategy is working:

The conversion stores contributed 150 basis points to second quarter comparable sales and that’s even with 35 of them, each being closed about 10 days during the quarter…. women’s is our most important single category and it was our top performer in off-price for the second quarter. In department stores, women’s apparel delivered a significantly improved sales trend versus first quarter

The company announced on September 17 that it was going all-in with the off-price conversion. Here is management (PR, our emphasis):

Since 2018, we have converted 98 department stores to off-price, including 17 small market conversions which are grand opening today in Michigan, Pennsylvania, Ohio, Kentucky, and Tennessee. Compared to their performance as a department store, off-price conversions have consistently delivered higher sales with less inventory, similar retail margins, and lower SG&A. Additionally, with the success of our recent tests of lower cost conversions, we are able to execute our fiscal 2020 conversion strategy while maintaining our capital spend in line with fiscal years 2018 and 2019.

So it’s not surprising that management is going for broke here.

Q2 gross margins were impacted by higher distribution cost, but this is an industry-wide phenomenon. SG&A was 28.9% which is an improvement of 110bp over last year’s quarter which is actually quite impressive as (Q2CC):

In isolation, operationally, things aren’t too bad but given CapEx ($15M year-to-date) and a 5% ($55M) inventory build-up to $499M in the face of tariff uncertainty and to avoid peak shipping rates. Indeed (Q2CC):

On a year-to-date 2019 basis, cash flows from operating and investing activities were $20 million better than 2018.

On the other hand, there was a $50M increase to $156M in accounts payable as suppliers keep supporting the company. Debt is still very large at $324M and interest payments reaching $4.1M in Q2, with cash at just $25M.

The company guides cash flow will come in positive for the year but that would be quite a turnaround and it’s not instantly obvious to see where this would come from. To have an idea, here from the 10-Q: 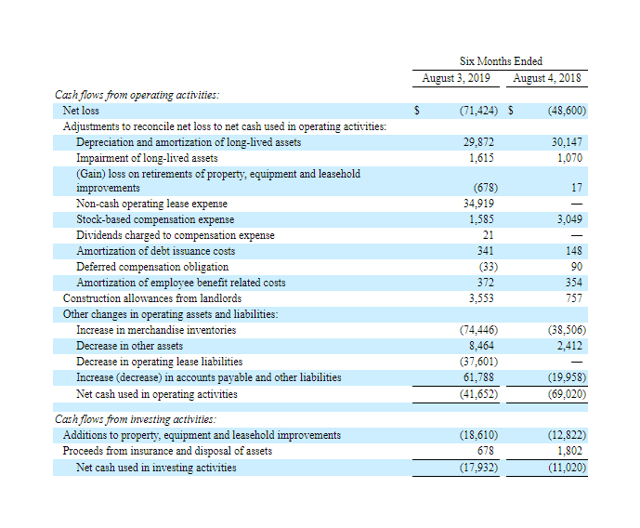 The obvious answer is to run down inventories and that’s certainly part of the answer as they deliberately bought ahead to benefit from reduced shipping fees and beat possible new tariffs.

Could they increase accounts payable even further? We realize suppliers have an incentive in keeping the company afloat, but surely there are limits here.

Another big item is the decrease in operating lease liabilities ($37.6M in H1) and we suppose with a large amount of store closings in H2 this is potentially another big source of cash flow improvement.

This is a bit of an odd figure as we can’t explain these little spikes, but they seem to be temporary so of little to no consequence. Given the financial distress, it’s amazing dilution has been almost absent but at current valuations this isn’t an attractive financing route.

It’s sort of silly to look at valuation as the company was clearly priced for bankruptcy earlier in the year. The shares have four-folded in just a couple of months as the company seems to be getting traction with the Q2 results and guidance, and then going all-in on the off-price strategy which investors clearly like.

The company, which is doing $1.57B in revenue (midpoint of guidance) has a market cap of just $57M. Adding the net debt sums up to an enterprise value of $356M, that’s still an EV/S of 0.2, but that’s actually not so unusual for a distressed retail chain.

Now, the share price has been much higher in the past on very similar revenues (but with different operational metrics, like $1+ EPS, needless to say). It’s not at all clear whether the company can return to these old glory days, but they have made a promising start on what is a very long road ahead.

On the other hand, the risk of bankruptcy has been reduced and if the company indeed manages to become cash flow positive, that would be a big step forward.

So this is one for those who like this kind of risky turnaround plays, a high risk, high return investment. We are fairly optimistic though and think it’s worth a small position.