The Federal Reserve has a dual mandate: to set interest rates and monetary conditions so that inflation is around and about 2%, and also that we have full employment. Or, to read that the other way around, to aim for an unemployment level consistent with a steady state of 2% inflation.

Our general view is that we can be at “too” full employment, i.e., an unemployment rate that leads to higher than 2% inflation. This is, of course, the Philips Curve. I’m not so sure that there’s a trade-off – a direct one – between the two, as I’ve said before:

My own view is that the connection is indirect – that it’s not full employment per se which causes the inflation, rather that this is simply a symptom of a general tightness in productive capacity. Which means, employment is sometimes truly the bottleneck in the economy; at other times, not. Thus, the variable predictive power of the curve. I should perhaps note that this is a distinctly heterodox economic view.

Then again, what I believe about inflation and unemployment isn’t quite the same as the rules the Fed is using to do its job. So, we’re better off sticking to the usual theory that there is that direct connection.

Even just three years ago, we would be regarding the current 3.5% unemployment rate as being that overfull employment which will lead to inflation. As it happens, that isn’t happening. We’re really not quite sure why.

So, the Fed might want to raise interest rates because it thinks inflation will be coming. Or, as it has said a number of times, to give policy room for any future slowdowns. On the other hand, we’ve not got that inflation. We’ve also got a bit of a slowdown in the economy just recently. We’ve even got that uncertainty over trade policy. So, why not lower rates?

Which is what the Fed has been doing. And now to the important question: what is it going to do next? The very strong odds are that it is going to cut rates again at the next meeting. What might stop the Fed is new information that says the inflation is there – or coming – and that would counteract that desire to loosen conditions.

We have two more pieces of information, both of which lead to the Fed still being able to cut rates. That is, they’re not the new information that would stop the Fed.

If we saw some vast surge in jobless claims, then we’d see the Fed perhaps rushing to cut rates. We don’t… rather, we see a boring continuation of recent trends:

Nothing very new there to change the Fed’s mind from its previously appointed path.

It’s worth noting that those numbers are as low as they’ve been in these past 50 years or so. And half the rate of 50 years ago.

We also have the CPI measure for the month.

The Consumer Price Index for All Urban Consumers (CPI-U) was unchanged in September on a seasonally adjusted basis after rising 0.1 percent in August, the U.S. Bureau of Labor Statistics reported today. Over the last 12 months, the all items index increased 1.7 percent before seasonal adjustment.

The CPI tends to be a little higher than the PCE inflation rate, which is what the Fed states it uses as its actual target for that 2%. It’s also the core measure, without food and energy, which is used:

The index for all items less food and energy rose 2.4 percent over the last 12 months, also the same increase as the period ending August.

Note again, while the core CPI might be above target, it’s not actually core CPI but core PCE which is the target. One reason being that we know very well that CPI distinctly over measures inflation – by at least 0.5% annually, and perhaps more. 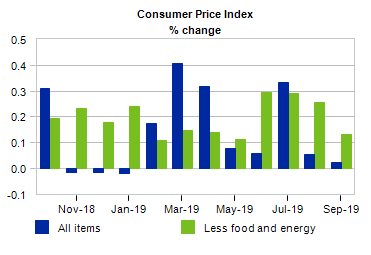 What should we make of the CPI?

This is about right:

Given what the Fed’s been saying recently, it’s looking for a reason not to lower rates. If it doesn’t find one, it will – almost certainly. This isn’t a reason for it not to.

As such, it’s very like the PPI we had just a few days ago:

In this short term, that the inflation just isn’t arriving, even as the unemployment rate hits 3.5%, means the Fed has more policy room on the downside. They can cut rates if they wish to deal with any transient slowing of the economy.

I tend to think that in the short term the economy can be left to itself, and we should be raising rates to gain more policy maneuver room. On the other hand, I am interested in the experiment to find out what actually is the full employment rate at which inflation arises. That second is rather more of a technical interest.

However, this isn’t a seminar, so we need to be thinking about what the Fed is going to do. I expect the Fed to lower rates toward the end of this month given the continued absence of any reason why it shouldn’t.

Rate cuts affect both the more general economy and also varied investment classes. So, we want to know when one is coming. The best bet, shading toward a certainty, is that we’ve another 0.25% rate cut coming at the next Fed meeting around the end of this month. Be prepared.