See the DailyFX Economic Calendar and see what live coverage for key event risk impacting FX markets is scheduled for next week on the DailyFX Webinar Calendar.

In the prior entry in the US Recession Watch series, we concluded that “the start of September offers a chance for traders to reassess the US economy and the perceived threat of growing recession odds.” Indeed, the return of volumes to financial markets after the summer gave traders an earnest opportunity to reassess their prior held beliefs regarding the state of the global economy – particularly as a potential US-China trade deal appeared on the horizon.

Over the course of September, US economic data has improved relative to analysts’ expectations. The Citi Economic Surprise Index for the US has improved from -11 at the end of August to 43 by the end of September. Like during August, given that data had performed better than expected and growth expectations failed to rise meaningfully suggests that market participants had been far too bearish on the US economy in the short-term. It still holds that fears of a US and a global recession linger.

US growth expectations have moved sideways despite economic data improving relative to analysts’ expectations in recent weeks. Based on the data received thus far about Q4’19, the Atlanta Fed GDPNow forecast is looking for growth at 1.7%. Q4’19 US GDP expectations have ranged between 1.5-2.3% since tracking began at the end of July. The next update to the Q4’19 forecast will be released after the September US retail sales data due on October 16. 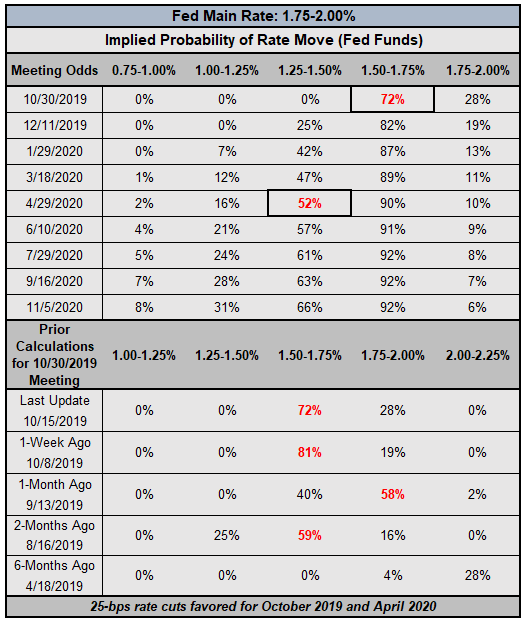 Using the US Yield Curve Inversion to Predict Recessions

Now that the US Treasury yield curve is no longer inverted (more on that shortly), movements in the short-term indicate a bump in sentiment among traders. The relatively faster rise by long-end yields compared to short-end yields in recent days reinforces the idea that the global growth is not at as significant of a risk as previously thought, and the US may not dip into recession right away; long-end yields are seen as a proxy for growth and inflation. 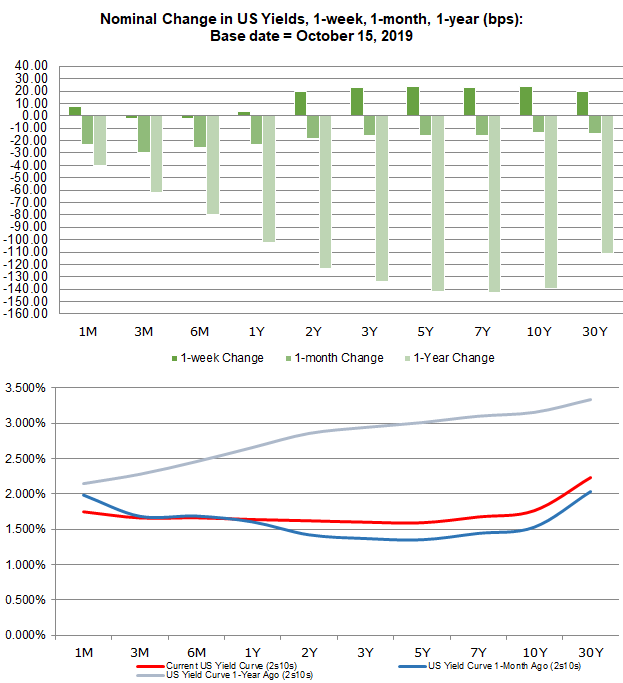 A Refresher: Why Does the US Yield Curve Inversion Matter?

The yield curve, if it’s based on AA-rated corporate bonds, German Bunds, or US Treasuries, is a reflection of the relationship between risk and time for debt at various maturities. A “normal” yield curve is one in which shorter-term debt instruments have a lower yield than longer-term debt instruments. Why? Put simply, it’s more difficult to predict events the further out into the future you go; investors need to be compenstated for this additional risk with higher yields. This relationship produces a positive sloping yield curve.

When looking at a government bond yield curve (like Bunds or Treasuries), various assessments about the state of the economy can be made at any point in time. Are short-end rates rising rapidly? This could mean that the Fed is signaling a rate hike is coming soon. Or, that there are funding concerns for the federal government. Have long-end rates dropped sharply? This could mean that growth expectations are falling. Or, it could mean that sovereign credit risk is receding. Context obviously matters.

Duke University finance professor Campbell Harvey, whose 1986 dissertation explored the concept of using the yield curve to forecast recessions, has said that the yield curve needs to invert in the 3m10s for at least one full quarter (or three months) in order to give a true predictive signal (since the 1960s, a full quarter of inversion has predicted every recession correctly). 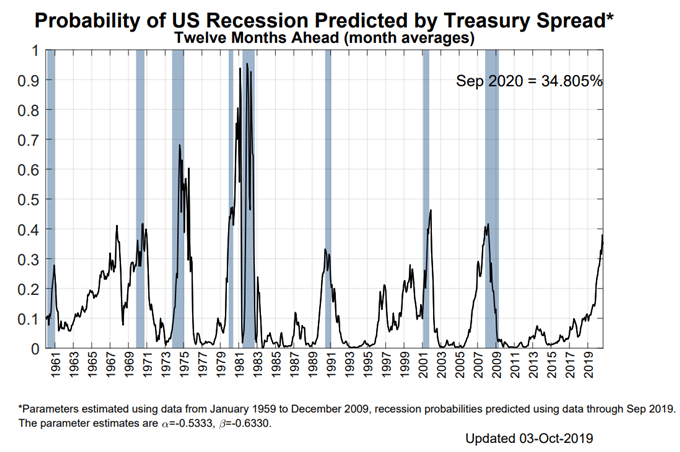 With the 3m10s spread inverted and staying inverted for three months through the end of September, but no deepening of inversion occuring, the probability of a US recession did not rise signficantly in between recession watch updates..Using the 3m10s spread, the NY Fed Recession Probability Indicator is now suggesting a 35% chance of a recession hitting the US economy within the next 12-months – down slightly from the 38% chance seen at the start of September.

Conclusions about US Yield Curve Inversion and US Recession Odds

The last time the 3m10s spread was at least 12-bps was at the start of May. Accordingly, backing out this assumption, the NY Fed Recession Probability Indicator would be discounting around a 20% chance of a recession hitting the US economy in the next 12-months if the indicator were updated in real-time.

View our long-term forecasts with the DailyFX Trading Guides