USD/CAD fails to test the September-high (1.3383) ahead of the Federal Open Market Committee (FOMC) Minutes, but the snag with the United States-Mexico-Canada Agreement (USMCA) may keep the exchange rate afloat as it puts pressure on the Bank of Canada (BoC) to alter the path for monetary policy.

USD/CAD trades near the monthly-high (1.3348) as the USMCA struggles to get support from Congress, and the ongoing shift in US trade policy may force the BoC to change its tune as the Governing Council pledges to “pay particular attention to global developments.”

The BoC strike a more cautious tone at its next meeting on October 30 as “escalating trade conflicts and related uncertainty are taking a toll on the global and Canadian economies,” and Governor Stephen Poloz and Co. may look to insulate the economy over the coming months as “the Bank expects economic activity to slow in the second half of the year.”

It seems as though the BoC will retain the current policy over the remainder of the year as “the current degree of monetary policy stimulus remains appropriate,” but the weakening outlook for global growth may push the central bank to alter the forward guidance for monetary policy amid waning hopes for a US-China trade deal.

In turn, headlines surrounding the USMCA may impact the monetary policy outlook, and the BoC may start preparing Canadian households and businesses for lower interest rates in an effort to mitigate the risks surrounding the region. 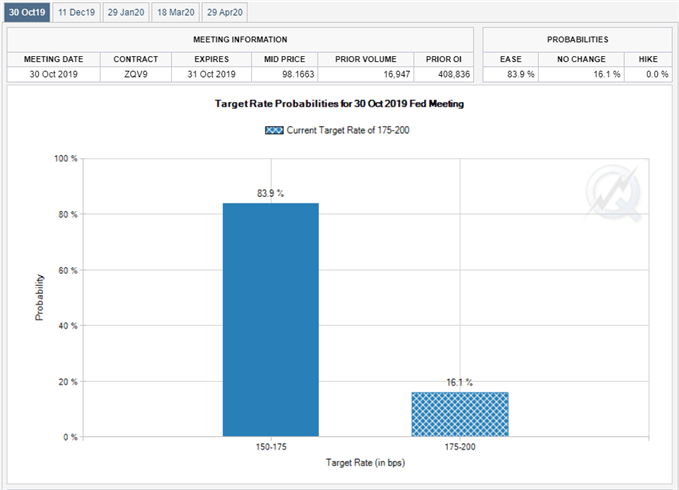 Meanwhile, the FOMC Minutes may do little to influence USD/CAD as Chairman Jerome Powell insists that “the future course of monetary policy will depend on how the economy evolves,” but Fed Fund futures now reflect a greater than 80% probability for another 25bp reduction on October 30 as the central bank head pledges to “act as appropriate to sustain the expansion.”

With that said, it remains to be seen if the BoC continue to endorse a wait-and-see approach later this month, but the diverging paths for monetary policy may continue to drag on USD/CAD as the Federal Reserve appears to be on track to push the benchmark interest rate towards 1.50% to 1.75% ahead of 2020.

Are you looking to improve your trading approach? Review the ‘Traits of a Successful Trader’ series on how to effectively use leverage along with other best practices that any trader can follow.

Want to know what other currency pairs the DailyFX team is watching? Download and review the Top Trading Opportunities for 2019.