What are geopolitics and how do they impact trading?

Trading geopolitics – the factor of geography via politics and international relations – is not easy. Whether it be moves to impeach a US President or force a UK Prime Minister to resign, signs of a global economic slowdown, a major international trade dispute or fighting in the Middle East, all represent developments that have a high probability of charging the financial markets.

For example, data suggesting the world economy is slowing would likely prompt a move into so-called “safe haven” assets such as gold, US Treasuries or German Bunds. Alternatively, signs of a recovery would likely persuade investors to opt for assets with a higher return that are also perceived to be inherently riskier, such as stocks. Along these lines, the reaction to indications that a trade deal is less or more likely will often be similar.

However, there is one asset that can be almost guaranteed to be impacted more than most, and that is crude oil.

How to trade geopolitics via oil

Crude oil prices are greatly impacted by geopolitics for a very simple reason: supply and demand. A weakening international economy can be expected to reduce global demand for oil, alongside demand for other commodities such as copper and iron ore. An increase in fighting in the Middle East – where much of the world’s oil comes from – might lead to throttling of wells, pipelines or processing facilities, reducing oil supplies.

What is Crude Oil? A Trader’s Guide to Oil

As oil prices are determined by supply and demand, a reduction in demand – all else being equal – will lower prices, while a reduction in supply will raise them. This can be seen clearly on the chart below of the price of Brent crude, a global oil benchmark. On Friday, August 1, 2019, a batch of manufacturing purchasing managers’ indexes and the US Institute for Supply Management numbers showed little evidence of a pickup in economic activity in July, sending prices tumbling. By contrast, on Saturday, September 14, drone attacks on two Saudi Arabian facilities sent prices soaring when trading resumed after the weekend. 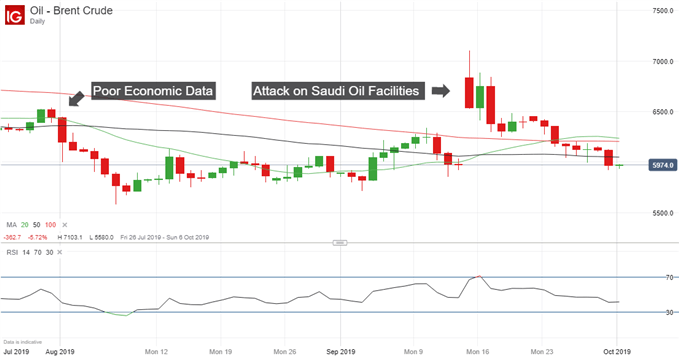 Against this background, it is clear why the long-running dispute between the US and Iran should affect oil prices: both are major producers of crude and most countries view oil as a strategic asset on which national security depends. What is less obvious is why, for example, good or bad news on the US-China trade dispute should affect oil. The logic here is that reductions in global trade caused by import tariffs may worsen the outlook for global growth and therefore the demand for oil.

The more nebulous concept of “market uncertainty” caused, say, by political turmoil in one of the major industrialized nations will likely impact oil prices too. While gold might benefit, oil might suffer as trader sentiment turns sour.

There is one major drawback, though, to using crude oil to trade geopolitics: the oil price also moves on factors specific to the commodity. One example is the weekly inventory statistics released by the US Energy Information Administration, although these stockpile numbers will have a greater impact on the price of US crude (West Texas Intermediate or WTI) than on Brent.

Similarly, news of production curbs by the Organization of the Petroleum Exporting Countries (OPEC) and its allies like Russia will affect oil prices too. So can the weather.

Longer-term, traders need to also monitor moves away from crude oil to alternative energy sources along with the progress of shale oil production in the US, which can substitute for OPEC oil. The US Dollar price has an effect as well, as oil is generally priced in USD. The bottom line, however, is that a business as huge as the global oil industry cannot fail to react to geopolitical forces bringing their own potential risks and rewards.

Strait of Hormuz: The World’s Most Important Oil Chokepoint

Resources to help you trade the markets:

Whether you are a new or an experienced trader, at DailyFX we have many resources to help you:

Feel free to contact me via the comments section below, via email at martin.essex@ig.com or on Twitter @MartinSEssex