Consumer products giant Kimberly-Clark (KMB) has rallied tremendously this year. Shares were near $100 at the end of 2018, but are about a third higher than that today. This sort of rally is something consumer products investors – and KMB holders in particular – certainly aren’t accustomed to. To this end, I intend to show that KMB’s business is improving, but nowhere near quickly enough to justify the current valuation.

Growth is improving, but not nearly at the pace it needs to

My problem with KMB is that it has always had such a difficult time growing due to structural headwinds. KMB sells consumer and business staples for the most part – paper towels, toilet tissue, diapers, etc. While there are large markets for these products, margins are thin and competition is intense. In addition, since there is so much competition, shoppers can make their decision based upon price in many cases, as differentiation is difficult when you’re selling paper towels. For a company like KMB that intends to be the premium choice in these commoditized categories, price elasticity is a problem.

This has been shown in its results over and over again in recent years. Here’s a snapshot of 2017, 2018, and the first half of this year to give us an idea of how poor KMB’s growth has been. 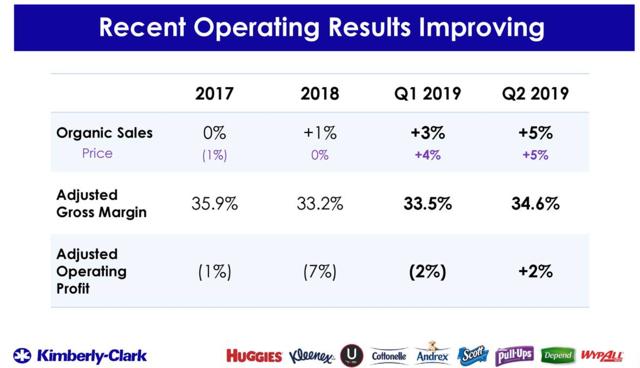 Sales have been flat – more or less – since 2017. To be fair, this year’s first half has been much better, and investors are frantic to buy the stock now that KMB is producing actual sales growth for what feels like the first time in a century. However, if we look at margins, they remain low despite years of cost-saving initiatives the company has undertaken. This has kept a lid on operating profits for years as well, as operating profit fell 1% in 2017, a whopping 7% in 2018, and is roughly flat this year. This, despite the fact that organic sales are up ~4% in the first half of the year. Given strong organic sales growth and years of intense cost savings, wouldn’t you expect operating margins to be rising due to fixed cost leverage? They just aren’t, and there is no reason to think that KMB continuing to do the same thing over and over again in the coming years will yield a different result.

Management raised guidance during the Q2 earnings release, and that fueled another leg of optimism from investors. 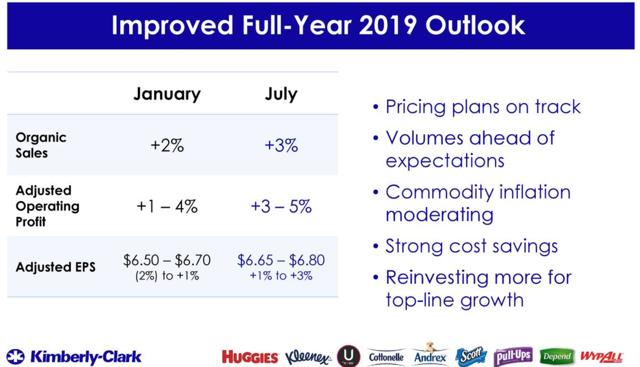 Guidance was raised on organic sales, operating profit, and adjusted EPS. That’s fine, and it shows that the company is improving, but if we look at the numbers the company expects to produce, they are hardly gangbusters.

KMB now expects low-single-digit organic sales growth, mid-single-digit adjusted operating profit, and low-single-digit EPS growth. I’ll remind everyone that the last one – EPS – is what matters and it is expected to be up 1% to 3% this year. That is anemic at best, but shares are soaring like KMB has unlocked some massive growth catalyst. It hasn’t; it is just trying to cut costs again and again and is seeing modest top-line improvement.

But wait, you say; aren’t we being a little pessimistic? Think of the long-term potential! Well, that doesn’t look particularly good, either. 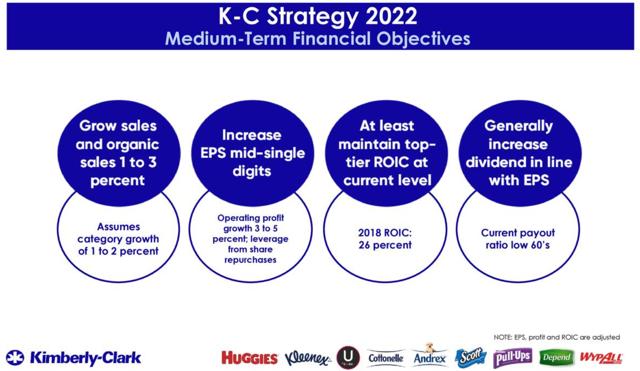 KMB reckons it can grow organic sales by 1% to 3% through 2022 and increase EPS at a rate of mid-single-digits. That doesn’t sound that tough, but keep in mind how difficult it has been for KMB to produce any growth, let alone mid-single-digits, in recent years. KMB has been cutting costs for years and it hasn’t resulted in meaningful growth, and while the recent resurgence of organic sales is fine, that also isn’t translating into actual EPS growth. The company’s master plan includes the hope of mid-single-digit EPS growth, hardly what investors should be rushing in to buy.

The valuation is way too rich

KMB’s valuation has moved materially higher this year, as one would expect given the massive rally. Below, I’ve plotted the company’s historical P/E ratios and yields to illustrate the unattractiveness of the stock today. 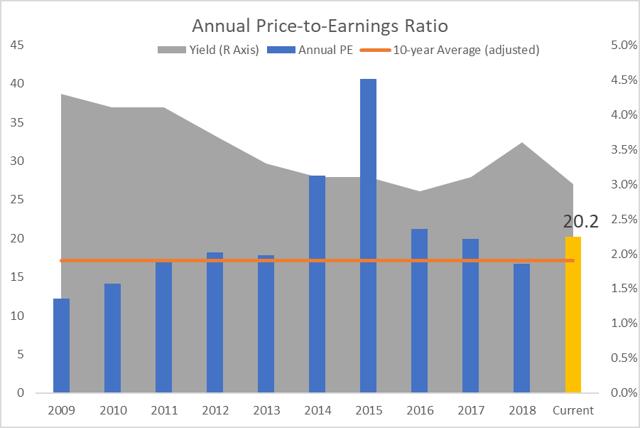 Shares trade for 20.2 times this year’s earnings of $6.82 per share. That’s the highest the valuation has been without the outliers of 2014/2015, which were due to unusually low earnings in the past decade. The company’s adjusted (excluding 2014/2015) average P/E ratio over the past decade is just 17, while the most recent three years have averaged 19. Either way, the stock is expensive today on that measure.

Another way the stock is too expensive is in the yield. Obviously, KMB is a classic income stock and with good reason; it has an exemplary dividend history and its yield is generally well in excess of 3%. Today, shares yield just 3%, which is the lowest it has been in the past decade as you can see above. Just like the valuation, this metric shows KMB has been bid up too quickly.

If you think the current rally is justified based upon some renewed future growth, I submit to you the graphic below.

Analysts see KMB’s growth as I do; uninspiring, to say the least. By 2022, the culmination of the company’s KC 2022 strategic plan, EPS should be $7.65, or just 12% higher than it is for this year. That hardly counts as growth at all, let alone justifying a new P/E ratio high.

This KMB is just like the old one, despite the fact that organic sales have improved. That simply isn’t enough to see the stock at $138. To my eye, KMB should trade for 17 to 18 times earnings and that is based solely upon its nearly-50-year dividend increase streak; KMB will almost certainly continue to struggle to grow in the coming years, as it has for so many in the past. Given this, I think KMB is a Sell and investors interested in owning it should wait for the yield to be at least 3.5% before purchasing. That equates to a share price in the area of $115 to $120, a sizable pullback lower from where we trade today. KMB hasn’t earned the right to a new high, but that is where we find it, and the stock should be sold as a result.