GBP: The notable mover has been the Pound, rising to a fresh multi-month high of 1.3100. Besides tripping stops through 1.3000 for the initial uptick, there has been little in the way of a fundamental catalyst to push GBP/USD higher, given that the latest election polls have not shown a continued widening in favour of the Conservatives over the Labour party, while UK data has also remained relevatively soft.

AUD: Overnight, Australian Q3 GDP disappointed expectations with the quarterly rate rising 0.4% (Exp. 0.5%). While the yearly rate rose in-line with consensus at 1.7%, the components would have likely provided concerns for the RBA, given that household consumption contributed a mearge 0.2ppts to GDP. That said, the RBA may yet again fail to match its somewhat optimistic economic forecasts. Alongside this, the labour market has yet to show signs of stabilising, given that ANZ job advertisements continued its decline, which in turn raises the risk of a persistent rise in the unemployment rate. Despite, AUD/USD bouncing off 0.6800, downside in AUD/NZD remains.

USD: The morning uptick in the US Dollar stemming from reports that the US and China were close to a trade deal had been brief, with the greenback resuming its downtrend folowing the surprisingly weak ADP report, in which the private payrolls rose 67k (lowest since May), sharply missing expectations of 140k. 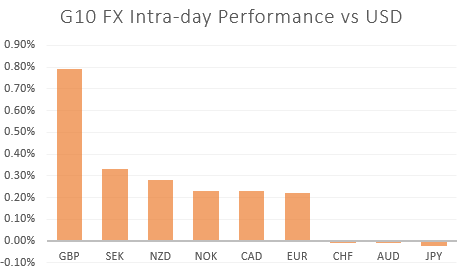