Crude oil prices slipped then rose again on Friday in Asia, but retained most of the gains made in the previous session even if the market is poised more broadly between Covid’s demand destruction and hopes that production cuts will see prices rise.

The market is still seeing some tailwind from this week’s International Energy Agency prediction that elevated crude stockpiles would start to fall as the year goes on.

News that China’s industrial output came back very strongly last month may have supported the market, although the prospect of ‘second wave’ infections among reopening economies is clearly keeping a lid on any exuberance.

Meanwhile gold prices were a little higher, holding on to the gains made in the previous session.

News that US President Donald Trump is open to talking about another possible stimulus bill gave the market a lift. This prospect is apt to underpin gold prices as they are often seen as a hedge against both inflation and monetary debasement.

In its more traditional geopolitical haven investment role gold got a boost from signs that the key international relationship between China and the US was weakening further. Trump said he had no interest in talks with Chinese leader Xi Jinping at this stage, even hinting that he could completely cut ties over China’s handling of Covid contagion.

The remainder of the global session offers many likely points of market interest, including German and Eurozone growth data and US industrial production, retail sales and consumer sentiment numbers. None is expected to make especially happy reading.

US crude oil prices’ uptrend line from late April remains in force having just survived another test. Prices have moved back above support at $27.28, April 9’s closing low. Psychological resistance at $30 will be well within the likely trading band which would be established should the market manage to remain above that level. Above that point resistance lies at the last notable peak, the same day’s intraday top of $31.58. 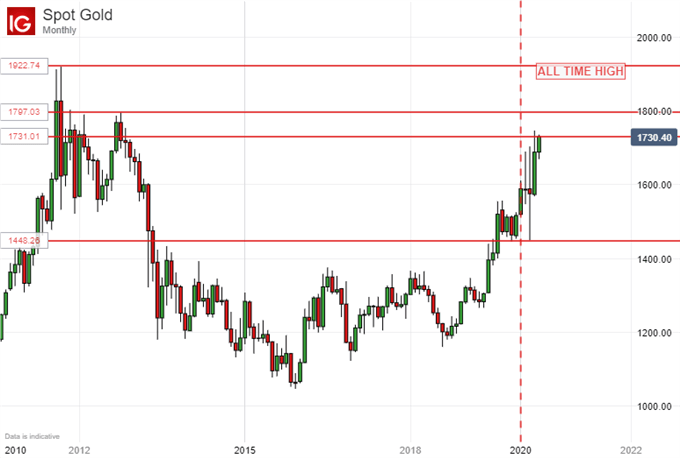 Gold prices have returned to the highs of October 2012 with this week’s strong gains. The $1797.03 level of November that same year now forms resistance, with the all-time highs now back in place. Prices sharp climb this year is hardly surprising given the fundamental backdrop, but all the same some consolidation is probable in the near future.

That said the underlying bid for gold remains extremely strong and any slides back below the $1700 point are likely to attract buyers.