Crude oil prices clawed back some of the losses made early in Wednesday’s Asia Pacific session, but concerns about ‘second wave’ coronavirus infections in those countries which ease their lockdowns have kept a lid on gains.

Such new outbreaks have been reported in China and South Korea, leaving markets unsure how to respond to any further opening up of economies around the world.

Still, there remains a clear prospect that supply will be reduced still further after last week’s significant production cuts from the Organization of Petroleum Exporting Countries and allies including Russia, the so-called ‘OPEC Plus’ group. Saudi Arabia’s cabinet has urged the expanded bloc to rein output in further still according to the country’s state news agency.

Further information on US gasoline and crude oil inventory levels will be coming later Wednesday from the Energy Information Administration.

Gold prices were supported by second-wave worries although they retreated from their session highs in afternoon trade.

The Reserve Bank of New Zealand left interest rates alone at record lows. This had been expected but the central bank left all options on the table when it comes to reducing them further over time, and expanded the size of its quantitative easing program.

It sounded extremely dovish and cautious over near-term recovery prospects. Gold usually does best when interest rates are likely to remain low and, with central banks around the world generally doing all they can do ensure this, the underlying investment case for the metal seems set to remain solid.

US crude oil’s daily chart seems to show a market waiting for news. Daily ranges have narrowed and upside progress has stalled bringing the dominant uptrend line ever closer to the market. Psychological support at the $20 mark would come into focus should that trendline durably break, but there seems little hurry to test it.

Still, a continuation of current range trade into the week’s end may bring just such a test about in any case. Trendline support comes in at $24.06 now/ 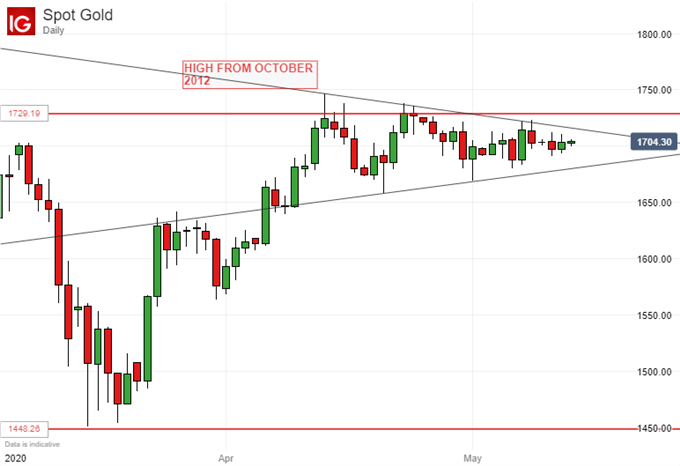 Gold’s daily price chart now shows the converging up- and down-trend lines indicative of a ‘pennant’ formation. This continuation pattern tends to mean that the market impulse seen before its formation will carry on once the pattern is worked out. That would suggest that further gains are coming even if the market has so far been reluctant to push past April’s highs.