It was an up and down week for midstream, but overall positive vs. last week, helped by a huge day Monday. The Supreme Court ruling in favor of pipeline development across the Appalachian Trail seemed to help midstream stocks broadly on Monday. Then midstream stocks struggled the rest of the week, subject to the whims of the market being whipped around by unemployment claims and Apple (NASDAQ:AAPL) store closings.

The AMZ finished down each day after Monday. There were green shoots early on a few of those days, and some late fades, including a big one Friday. The AMNA is flat month to date and seems to have stabilized after its huge bounce off the bottom, so from here it feels like the broad macro will drive midstream stock outcomes until earnings season or a big sector-specific strategic announcement.

For the week overall, midstream stock performance was on par with the S&P 500 and well ahead of other yield-oriented equities like utilities and REITs. The market feels rudderless overall, with headlines and day traders driving big moves in both directions. Oil prices flirted with $40/bbl again this week but closed below that key level. There were no more surprise equity offerings, but the debt capital markets remain wide open for midstream stocks.

Simplification and corporatization continued this week with the closing of the EQM merger with ETRN. There are now just 30 K-1-issuing MLPs with midstream assets and more than $250mm in market cap left. That 30 includes the following six MLPs that aren’t considered midstream MLPs per Alerian (SUN, GLP, CAPL, EVA, WLKP and USAC). Traditional MLPs are fading away.

EQM went public in June 2012 at $20/unit and a 7% yield. For the first five years after IPO, EQM raised its distribution at an annual rate of 24%, among the highest in the sector. With Marcellus natural gas production growing like a weed, and with its drop-down backlog, EQM was a darling for several years, rallying to more than $100/unit at its peak in June 2014. Its general partner EQGP went public in May 2015.

The combination of (1) the demise of the MLP capital markets, (2) extremely low natural gas prices, and (3) the albatross that the Mountain Valley Pipeline pressured EQM’s share price, which dropped below $8/unit in March before recovering to around $20/unit at closing. It was an MLP built for healthy capital markets and enthusiasm for large development projects. The assets live on in its corporate form with ETRN, but the original business model is long gone.

In a bounce back week for midstream, several MLPs posted 10%+ returns, led by PBFX and WES. The list of biggest losers included some of the best performers from last week and generally names not included in major MLP ETFs. 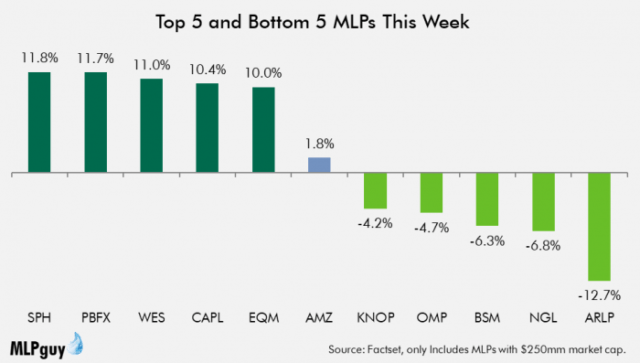 YTD, three MLPs are positive overall, and CQP reclaimed the top spot from EVA. GLP replaced CEQP in the bottom 5, which was otherwise little changed. 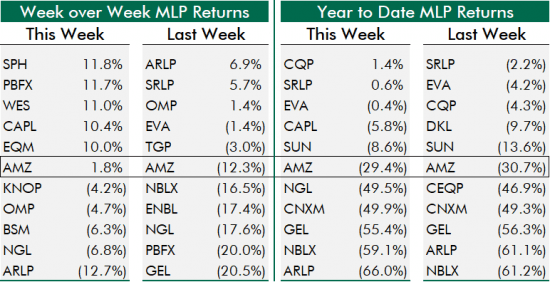 ETRN was a big winner early this week, rallying hard on the positive SCOTUS ruling related to the Appalachian Trail, but then faded late in the week and AM ended up with the best performance in this group. Other natural gas names LNG and WMB outperformed. TRGP likewise rallied on the positive commodity move. 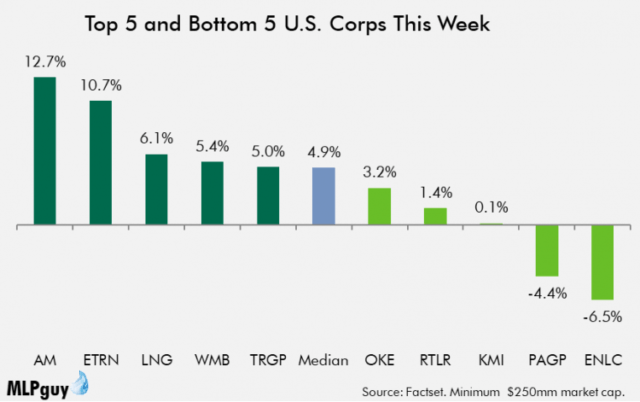 AM‘s outperformance continues, with another week in the top 5. LNG likewise repeated in the top 5. ENLC and PAGP were underperformers again this week. On the YTD leaderboard, TRGP climbed a few spots in the bottom 5, while AM moved into 1st place overall in the top 5, just ahead of HESM. 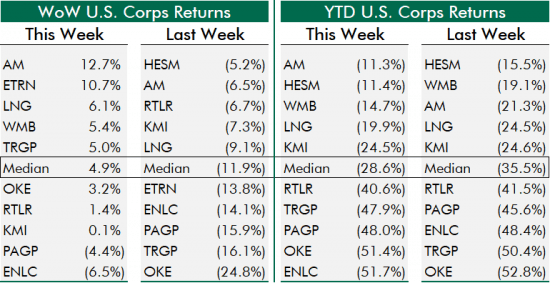 Strong showing by Canadian midstream this week, especially among the smaller names. Gibson (OTC:GBNXF) led the group, while Keyera (OTCPK:KEYUF) and Pembina (NYSE:PBA) were also 5%+ gainers, all likely benefiting from exposure at the big energy conference this week and from stronger commodity prices. 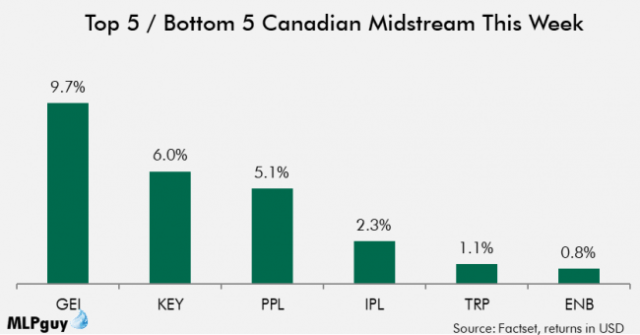 Last week’s winners and losers chart was basically the opposite of this week, with the biggest names going from best- to worst-performing stocks, although Gibson outperformed in both weeks. On the YTD leaderboard, TRP remains in the lead, while Gibson replaced ENB in the top spot.

News of the (Midstream) World