Schrödinger’s (SDGR) potential as a disruptor in the discovery of therapeutics and industrial materials has not been recognized by the market. Schrödinger has the consistent revenue growth to justify the current market price, yet there is still room for appreciation due to financial awards from collaborators and Schrödinger’s internal therapeutic pipeline.

Schrödinger has developed a physics-based computational platform in order to accelerate the discovery of new therapeutics and industrial materials using AI and machine learning. This allows new molecules to be discovered at a faster pace and lower cost because both the traditional wet chemistry costs and the personnel expenses are reduced. Also, the time reduction can help Schrödinger’s clients beat their competitors to the market.

Not only has Schrödinger been able to attract new customers, but also retain 96% of customers with an annual contract value of more than $100,000. All of these data points suggest that the technology behind Schrödinger’s platform is successful, which will be the most important factor in Schrödinger’s future growth. Schrödinger has potential to completely disrupt how pharmaceutical companies discover therapeutics- a market that is worth billions of dollars a year. Worldwide Biopharma R+D Expenses are expected to be $181 billion by 2022. Currently, Schrödinger has a fraction of a percent of the market share, but given the signals that its software is successful, Schrödinger could easily capture a market share that is 100 times its current ACV. 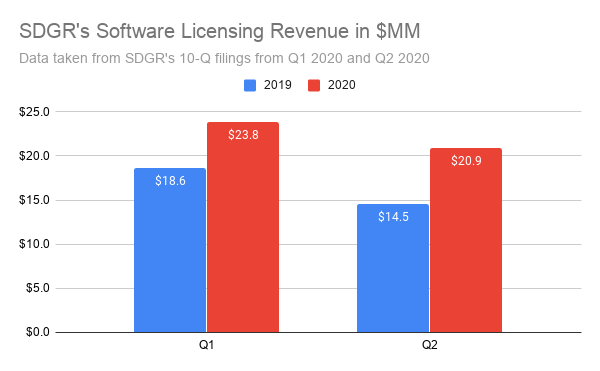 In the first six months of 2020, Schrödinger had software licensing revenue of $44.7 million, up 35% from the $33.1 million made in the same six months last year. Schrödinger has achieved this revenue growth even while reducing their sales and marketing expenses by 12%.

The coronavirus has played a part in this increased revenue growth. Schrödinger has a project management solution allowing remote collaboration among team members. Schrödinger has also entered a collaboration agreement to screen potential antiviral drugs for effectiveness against COVID-19. Takeda (NYSE:TAK), Novartis (NYSE:NVS), Gilead Sciences (NASDAQ:GILD), and Google (NASDAQ:GOOG) (NASDAQ:GOOGL) have joined this alliance, an important indication that Schrödinger’s platform is successful because these large companies have embraced Schrödinger as an equal player in the fight against coronavirus.

However, this is not the only source of revenue growth. Schrödinger has continued to sell more solutions to existing customers, has acquired new clients, and has created partnerships with companies such as Thermo Fisher (NYSE:TMO) and Viva Biotech (OTCPK:VBIZF). Also, Gates Ventures awarded Schrödinger $3 million ($1 million a year for three years) in basic research funding to explore creating more energy efficient batteries which signifies an expanding role in the material science industry. (Note: Schrödinger would be allowed to monetize any discovery that comes from this funding per details in its Q2 2020 10-Q filing.)

Schrödinger’s P/S ratio is the key to its valuation

There is not a clear competitor to value Schrödinger against, however, its business is similar to Adobe (ADBE), Autodesk (ADSK), and ANSYS (ANSS), all of whom license software to customers. They are profitable companies that currently trade at a p/s ratio of around 15. Therefore, when (and of course, if) Schrödinger becomes profitable, its P/S ratio should be around 15.

Schrödinger has not publicly announced when they plan on turning a profit because they are focused on growth and developing a superior platform through acquiring and retaining top talent- this includes a staff of about 200 Ph.Ds. I believe that Schrödinger can become a profitable company in 2026; this allows time for the increased costs with becoming a public company to be offset by growing software revenue and the recognition of alternative revenue streams. 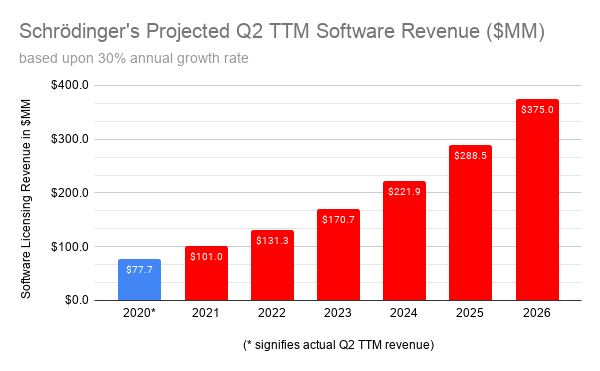 Although the 30% annual growth rate for the software licensing revenue appears ambitious, it is still a conservative estimate based upon the growth trends in Schrödinger’s previous quarters and the underlying power of its computational platform. Estimates this far into the future may seem too presumptuous, but with the uncertainty around the coronavirus and its economic impact, the longer timeline hedges the risk of short-term reductions in R+D spending for non-COVID therapeutics and allows for Schrödinger to expand its market share (still less than 1% of worldwide biopharma R+D expenditures).

With revenue of $375 million in 2026 and a P/S ratio of 15, Schrödinger would be valued at $82 per share, only an upside of 18% from the current price of $69. This is based upon shares outstanding of 68.6 million (includes the 750,000 additional shares available to the underwriters of Schrödinger’s recent public offering)

What does Schrödinger’s recent offering mean?

I am unsure of why Schrödinger just completed another public offering six months after its IPO because at the end of June 2020 its balance sheet showed $110.38 million in cash and $173.6 million in marketable securities with total liabilities of less than $54 million. This extremely strong financial position is further bolstered by the expected $278 million provided by the recent public offering. This new offering is a bit concerning because interest rates are at rock-bottom and Schrödinger not only has less than $10 million in long-term liabilities, but also enough cash to pay its current liabilities twice-over. In my view, Schrödinger:

Unfortunately, I believe the first option is the most likely. However, this does not mitigate the future potential of Schrödinger’s technology, in fact, it shows that Schrödinger is committed to investing in its future growth. This recent offering signifies that shareholders could be diluted in the future because of future offerings or continuing stock-based compensation not off-set by buybacks. Schrödinger’s business model is capital-intensive because it requires highly paid Ph.Ds and extensive research to create a better understanding of computational chemistry; however, dismissing these necessary expenses as impractical would be less than prudent because all of Schrödinger’s competitors must make the same expenditures and the research will help advance not only Schrödinger’s software but also its internal pipeline.

Schrödinger has another revenue stream

Schrödinger receives financial rights from certain collaborators, including “research funding payments, discovery, development, and commercial milestones, potential option fees to license projects, and potential royalties in the single-digit ranges.” (Schrödinger’s 2019 10-k) Schrödinger has also received some equity stakes in certain collaborators which contribute to the $173.6 million in marketable securities on its balance sheet.

Schrödinger is rapidly expanding the number of its collaborative programs, which should help to rapidly increase its drug discovery revenue, which is independent of its software licensing revenue and can vary from year-to-year. This is revenue that is unaccounted for in the valuation and will grow independent of software sales, provided that Schrödinger’s platform continues to be successful. Schrödinger has a financial stake in 12 therapeutics (including those in their wholly-owned pipeline) that are in later-stage discovery, which could lead to significant royalties or revenue in the near future.

The potential of Schrödinger’s wholly-owned pipeline

In addition to licensing its software to develop therapeutics, Schrödinger is using its platform to create 5 internal, wholly-owned therapeutics to treat different types of genetically defined cancers:

Schrödinger is not without risks

The long-term success of Schrödinger is tied to the success of its physics-based platform, including its technical development and intellectual property. The only way for Schrödinger to maintain its technological sophistication is by retaining top employees, and the premium compensation- stock options that could dilute current shareholders- that accompany them. Schrödinger also depends on license agreements with Columbia University in order to successfully run its software. Any change to these agreements, including an increase in royalties payable to Columbia University, could alter my forecast for Schrödinger’s revenue or their technological advantage. Schrödinger’s success also depends on also its own portfolio of patents, trademarks, and unprotected trade secrets.

The market that Schrödinger competes in has many different competitors and a huge initial hurdle to overcome. Its main competitor is BIOVIA, owned by Dassault Systèmes (OTCPK:DASTY); however, there are also many academic platforms created by graduate and post-doctorate students that are never commercialized. Because the field computational chemistry has not been widely commercialized, there is intense competition for market share not only from physics-based platforms, but also the traditional wet chemistry. I see the main challenge facing Schrödinger’s growth is the initial hurdle of convincing pharmaceutical companies that have relied upon wet chemistry for years to instead rely on a computer simulation to do the same initial discovery work.

Given that Schrödinger was founded thirty years ago, an argument could be made that its platform has not been able to revolutionize computational chemistry yet, so it will never happen. I believe that this is false because the power of computers has increased exponentially since 1990 and scientists have a better understanding of the physics behind computational chemistry every day. However, since Schrödinger was an established company before its IPO in February, it may have trouble transitioning to a public company and the accompanying regulatory hurdles and public scrutiny. Also, Schrödinger needs to be able to properly manage its finances and its growing hoard of cash. The recent public offering creates doubt that Schrödinger could become profitable and will rely on its equity to finance its continuing operating loss at the expense of its shareholders.

The earlier mentioned price of $82 per share is reliant upon the steady 30% annual revenue growth and the ability of Schrödinger to become profitable. I believe that the growing biotech and pharmaceutical industries, coupled with the recent developments in quantum computing and accelerating computational power, will easily allow Schrödinger to grow revenue at 30% a year for at least six years. $82 is a low estimate and does not account for any drug discovery payments received by Schrödinger or the potential success of its internal pipeline; therefore, I believe Schrödinger is currently undervalued at $69 because of the incredible potential that Schrödinger has to revolutionize the discovery of new therapeutics and industrial materials.

Disclosure: I am/we are long SDGR. I wrote this article myself, and it expresses my own opinions. I am not receiving compensation for it (other than from Seeking Alpha). I have no business relationship with any company whose stock is mentioned in this article.