USD/JPY appears to be on track to test the July low (109.06) following the Federal Reserve interest rate decision as longer-dated US Treasury yields come back under pressure.

USD/JPY extends the series of lower highs and lows from the previous week as the US ISM Manufacturing survey unexpectedly downticks in July, and the exchange rate may face a further decline over the coming days as the 10-Year Treasury yield approaches the July low (1.13%).

The update to the US Manufacturing survey may keep the Federal Open Market Committee (FOMC) on the sideline as the index narrows to 59.5 from 60.6 in June to mark the lowest reading since the start of the year, and indications of a weaker-than-expected recovery may continue to drag on US yields as it encourages the Fed to retain the current course for monetary policy.

As a result, the slew of US event risks may influence USD/JPY ahead of the Non-Farm Payrolls (NFP) report as a number of Fed officials are scheduled to speak over the coming days, and more of the same from the central bank may keep US yields under pressure as Governor Lael Brainard, a permanent voting-member on the Federal Open Market Committee (FOMC), insists that “employment has some distance to go” while speaking at the Annual Meeting of the Aspen Economic Strategy Group.

In turn, lackluster data prints coming out of the US economy may drag on USD/JPY as the FOMC remains reluctant to switch gears, but a further decline in the exchange rate may fuel the recent shift in retail sentiment like the behavior seen earlier this year. 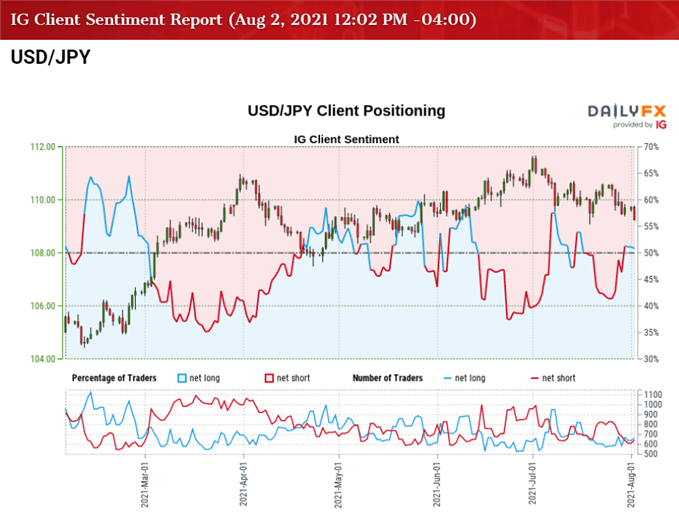 The IG Client Sentiment report shows 50.75% of traders are currently net-long USD/JPY, with the ratio of traders long to short standing at 1.03 to 1.

With that said, a further decline in USD/JPY may fuel the shift in retail sentiment like the behavior seen earlier this year, and the exchange rate appears to be on track to test the July low (109.06) as US yields come under pressure.